Vote for Nick Percy to win prize money to support his sports training. He’s currently ranked fourth in the world for under 17s discus and first in the UK and Europe. Fantastic home-grown talent that we should all support.

Fantastic news for Bonchurch athlete, Nick Percy. This in from the Ambition AXA Awards, in their own words. Ed 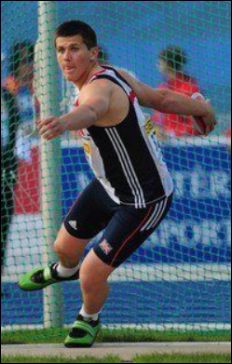 Nicholas Percy needs the public’s vote after being selected from thousands of entries as one of the final five applicants in the Sports category of the Ambition AXA Awards.

Nicholas impressed the judges because of his significant achievements in discus, hammer and shotputt. In the under 17s age group he is currently ranked number 4 in the world in discus, number 1 in Europe and the UK and he also holds the national all time record which had been previously held for 16 years.

Your vote can help
He could now be in with a chance-of-a-lifetime bespoke development package to support him in the achievement of his ambitions, which could be worth up to £40,000 each (a total prize fund of £200,000).

The 17-year-old from Ventnor in the Isle of Wight now goes on to join his four other nominees in a public vote from Wednesday 2 to Sunday 6 November.

The three nominees with the highest number of votes from each category will then go on to the Ambition AXA Awards finals which will be hosted by Carol Vorderman at the Royal Courts of Justice in London on 30 November.

Fantastic opportunity
Nicholas said, “Winning the Ambition AXA Award will give me the opportunity to expand on my training as I am already draining my parent’s finances quite considerably. They even had to fund my trip to the Commonwealth Games”¦. it all mounts up, especially when you live on the Isle of Wight!”

Helping to nurture outstanding talent
Sir Alan Steer, said, “The Ambition AXA Awards are all about helping nurture outstanding young talent, and we’d like to encourage people to therefore vote for the person they think is truly dedicated to their field and would reap the most reward from a bespoke development prize. With the public’s help, some of these talented youngsters could go on to have a real impact on the world in the future.”

The announcement comes after recent research by AXA showed that 87% of schoolchildren in the south region are ambitious but only 27% do sport once a week, unlike Nicholas, who trains for hours every week.

The Ambition AXA Awards were launched in March to help support talented, ambitious and dedicated 11 to 18-year-olds in the fields of sport, enterprise, science, the arts, and the community.

Percy Thrower. But then I’m sure he’s heard that one before.

Good luck Nicholas, you deserve this.

Well Done Nicholas, So proud of you xx

Have cast my vote and intend to send the link to all my email pals to ask them to vote too!! Good luck Nick!! A smashing lad from a smashing family!! :-)

Bless you… voting has been extended until Monday 11.59AM due to voting delays.. so anyone who hasnt voted..please do … thank you
DAPx