Secret Wars will be hosting the graffiti village at White Air this year.

In previous years at the White Air Extreme Sports Festival a graffiti wall has been part of the ‘Have a Go’ activities. 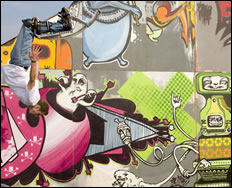 We’re not talking the mindless tagging that takes places around towns and cities (and on tents at Bestival), but the incredible skill of street art.

So it’s fantastic to hear that after months of planning and negotiations, organiser Nigel Howell has managed to secure Secret Wars to host the Graffiti village when the festival opens on Brighton beach at the end of the week.

If you’ve not heard of Secret Wars (or read about it previously on VB), it’s the World’s premier live art battle – we went along to one a couple of years ago in Brick Lane and it was fascinating to watch. Hundreds of people were crammed into a warehouse watching intently as the artists battled against each other to create the winning piece of artwork.

Watching the amazing pieces of artwork appearing in front of eyes is a feast enough, but also watching the banter and camaraderie between the artists adds to the interest.

The battles have taken place all around the world and are not massively advertised but have built up the reputation by word of mouth.

We hear that Secret Wars is on a global mission to turn live art into a recognised sport, so it certainly deserves its place at White Air this year.