Readers may remember the piece we ran last month regarding the development of the English Coastal Path. Mike Slater from the IW Ramblers Association has been in touch with more info regarding their campaign to ensure the Isle of Wight is included. Ed 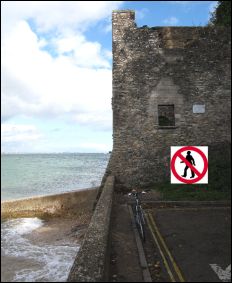 Work on the English Coastal Path is well underway – but the Isle of Wight has been left out. The IOW Ramblers do not think this is fair. We want local walkers and tourists alike to be able to enjoy walking around our entire spectacular coastline.

During the Walking Festival and at the Walk the Wight hospice fund raising event we have been making people aware of this issue and encouraging them to contact the politicians that decide these things to make their views known. (links given below)

Roll back will cater for coastal erosion
The Marine and Coastal Access Act 2009 provides for a coastal trail to be established around the whole English coast.

In the words of the Act, it will be made up of a path with spreading room, a margin of land accessible to the public for the purpose of its enjoyment. There will also be provision for the path to ‘roll back’ inland to cater for coastal erosion.

Ten miles with no coastal path
Here on the Isle of Wight we are a long way short of having a comprehensive Coastal Path. Around half of the existing path runs either inland or along public roads. More than ten miles of our northern coastline between Yarmouth and Ryde have no public access or footpath.

A study commissioned by the Countryside Agency identified that the South West Coastal Path is worth over £300 million each year to that regions economy. If we pro rata that to the Isle of Wight coast line, a complete ‘Wight Coast Trail’ could be worth £35 million pa for our Island economy. It will also provide additional healthy outdoor recreational facilities for Island residents.

So far work has started by Natural England on six stretches of coast in Dorset, Cumbria, East Riding, Kent, Norfolk, and Somerset.

Isle of Wight not included
Unfortunately as an Island, the Isle of Wight is not included under the provisions of this Act. A special Order will need to be prepared and signed by the Environment Minister for us to be covered.

So far in spite of several representations by the Ramblers to Officials and Ministers within DEFRA, we have received no commitment as to if or when such an order will be signed.

The Isle of Wight Ramblers has launched a campaign to ensure that a comprehensive coastal trail is developed for the Isle of Wight as part of the national implementation of the Marine and Coastal Access Act.

What can you do?
You can help us achieve this by using the Ramblers link to send a simple E message to the Secretary of State for the Environment.

newest oldest most voted
Meursault
Maybe we should try and get a definitive classification of the Isle of Wight’s ‘Island’ status. For years the government has grouped us with the south east which has meant we have not been able to get the level of european structural funds that other peripheral areas get. Then when it suits we are set adrift as an Island. Even down to couriers – some classify us… Read more »
Vote Up00Vote Down
Paul Miller

Vote Up00Vote Down
Old Knobby
Is there really ten miles with no access between Yarmouth and Ryde? Starting at Yarmouth, there’s no access between the common and Bouldnor, there’s a path down through Port La Salle but it no longer goes anywhere due to erosion and no doubt the homeowners down there won’t want it re-established! From Bouldnor there’s the coastal path through to Hampstead, admittedly not all right on the coast,… Read more »
Vote Up00Vote Down
Mike Slater

Hi Old Knobby
When you consider the coastal path from Yarmouth to Ryde don’t forget the stretch along the road to bypass MOD land. There are provisions in the Act to negotiate access to areas like this.
Go to our campaign page on our Web Site http://www.iowramblers.com and you will find links to two pdf documents that provide a detailed analysis of the whole of the current coastal path.

This path is very important for the Island economy. Many people come here for walking holidays and last year about 4,000 came over for the Walking Festival in May.

Public access to the coast will boost tourism and the island’s economy – essential during this difficult financial time, as well as providing long term benefits for visitors and locals alike.