The annual charity rally has been running for 23 years and has raised over £300,000 for good causes in the process. 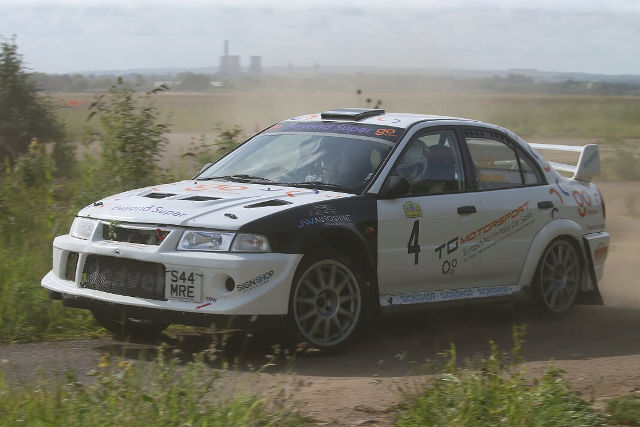 After plans for Richard Weaver and regular co-driver James Pink fell through to travel to Belgium to compete last weekend, by securing a late entry, Richard partnered by Hastings co-driver Tim Sayer (stepping in for an absent James) tackled the 2019 running of the charity focused Abingdon Car-nival Stages in his Mitsubishi Evo 6.

Rain the previous day gave way to a dry start to the Sunday event and happily the clouds stayed away for the rest of the day. The pair set reasonable pace on stage one, although a high speed spin of the road and through the grass at 80mph woke them up in fine fashion.

With two stages remaining, an issue with fluid loss from the transmission meant that sadly the team had to miss the penultimate stage.

Lost the class win
They rejoined for the last stage, but taking a 20 minute time penalty in the process for the dropped stage. This plummeted down to 69th overall and lost them the class win. Despite this the duo remained upbeat about the result.

“Great to be part of this success story”
Richard said,

“This annual charity rally has been running for 23 years and has raised over £300,000 for good causes in the process.

“It’s a great to be part of this success story and to be able to do so whilst having fun in a car is fantastic!”

Work has already begun to identity and rectify the issue with the car and whilst no concrete plans are in place before September, the team plan to sneak an event in ad-hoc if possible.