Well done to all those recognised in the Wight Tri Awards 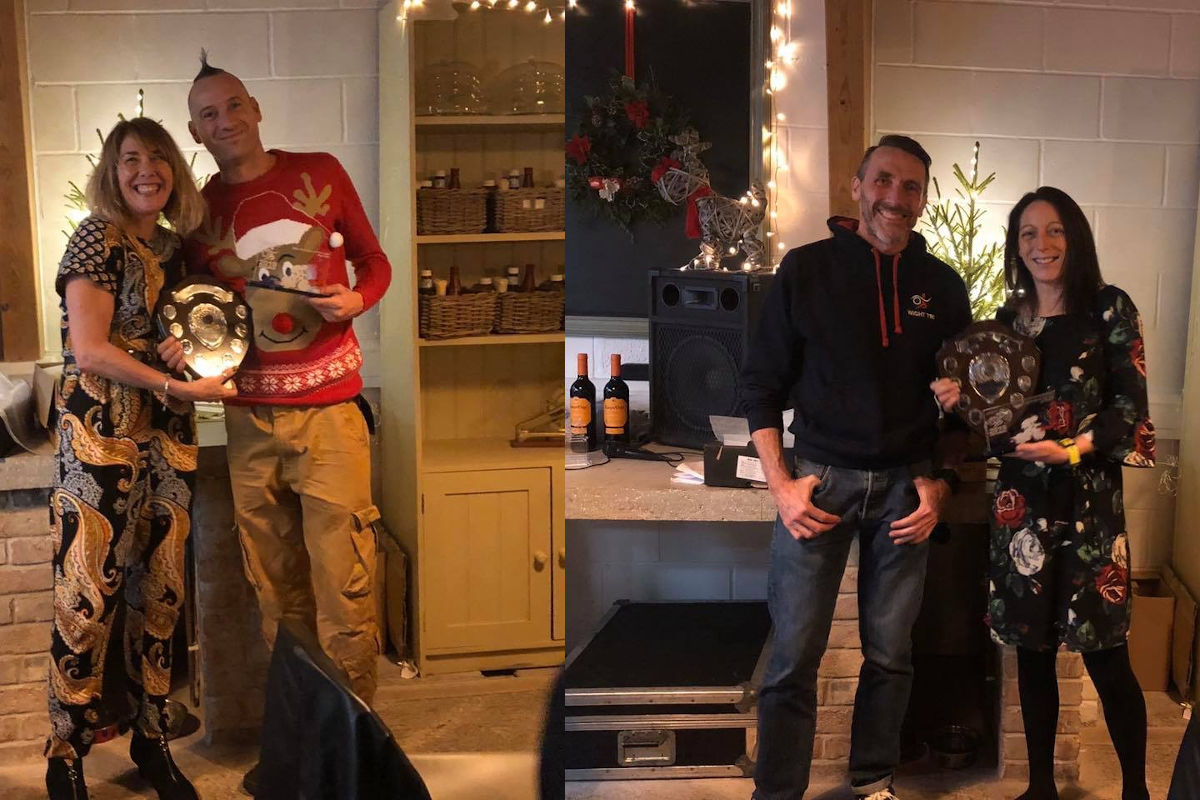 This year, Wight Tri held their AGM and Awards Evening at Chessell Pottery to celebrate another successful year for the Isle of Wight triathlon club.

The Wight Tri Membership has increased over the years with many new members being introduced to the sport of triathlon and duathlons. Starting off with the super sprint distance, to progressing to the Sprint and Standard Distance and then to many members enjoying the longer distance of Ironman 70.3 and the full Ironman Distance, Wight Tri Members continue to have great success at local, national and international level.

The Awards Evening started with a short AGM, chaired by Chairman, Nick Kenney, followed by a lovely meal provided by the hosts at Chessell Pottery, finishing off with the following awards being presented to several members, orchestrated by Kevin Winchcombe.

The Male and Female Triathlete of the Year Awards were presented to Dean Pike and Janet Fletcher (pictured at the top).

Dean has had an amazing year, in only his second year of taking up the sport. At the end of 2018, he qualified for the Island Games Triathlon Team and this spurred him in to training exceptionally hard to produce a fantastic performance in Gibraltar.

He then continued his success when taking on the London Marathon, the Prudential Ride London and the Swim Serpentine to become the only island athlete to complete the triple challenge. He completed an awesome 2019 by winning the West Wight Triathlon, which also was part of the Wight Tri Club Championship. Dean also received the Winners Trophy.

Janet Fletcher also had a super 2019. She represented Team Isle of Wight in the Gibraltar Island Games and also for the first time she represented Team GB age group at the European Age Group Standard Distance Triathlon Championships in Weert, in the Netherlands.

The Duathlete of the Year was awarded to veteran Simon Jones, who continues to compete at international level, representing the GB age group Duathlon Team in the 60-64 category.

The Lifetime Member award was awarded to a true Wight Tri stalwart, who has been part of the club since 1990. Steve Dines has successfully held many club roles over the years, but Steve has always been an inspiration to club members for his enthusiasm to help and and encourage members to improve and enjoy the sport of triathlon. Even after over 30 years in the sport, he has never lost his dedication and inspiration to encourage new members to take up triathlon.

Steve also received the Percy Veerance Award, which is presented to the Triathlete who never gives up. He started off his season this year with the main aim to complete 10 Sprint Triathlons in aid of Dementia UK in honour of his father who had died from this disease. In true Steve style, he achieved this, and also won several of his age group awards along the way.
Steve also won the Summer Splash and Dash Nominated event series, showing how committed he has been to triathlon in 2019.

The Most Improved Athlete Award was presented to new comer, Angela Tapster, who has shown that even with work and family commitments, she fitted in her training in all three disciplines to compete in local and mainland events, finishing off her season with a superb performance at the West Wight Triathlon.

The Club Volunteer Award was a joined affair for Neil Cooper and Liz Dunlop. Neil works tirelessly for the club, as events coordinator,  and often gives up the opportunity to complete himself to run the club events.  This is a very time consuming role, demanding hours of planning, coordinating results etc. As press officer, Liz also puts in many hours each week to ensure that the profile of the club is projected throughout the local press and social media. She also collates all the reports and results for the awards evening. Wight Tri are truly grateful to both Neil and Liz, who have given several years to these roles.

Wight Tri would like to thank Russ Mellor of Cut Laser Cut for supplying the superb engraved trophies to all award winners and for now supporting our Winter Duathlon series.

Thanks also to Chessell Pottery for providing such a lovely meal and welcoming environment for our awards evening.

News shared by Liz on behalf of Wight Tri. Ed