Staff at Wightlink paid tribute to their colleague, Rob Goddard, who sadly died of heart failure in October 2017. 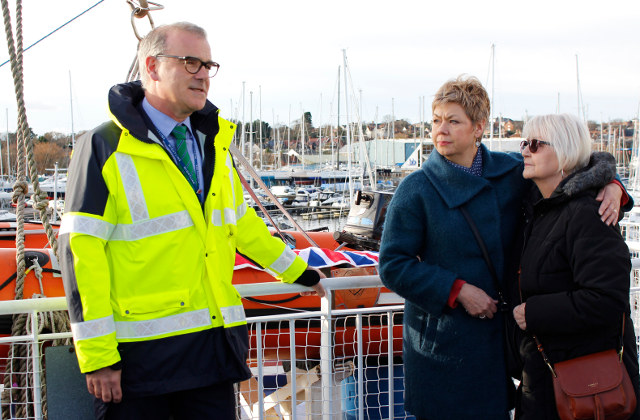 Wightlink staff have paid tribute to their colleague Rob Goddard who died in October 2017.

The senior rating on the Lymington-Yarmouth route was remembered by his friends and family at a ceremony on board the ferry Wight Sky.

A plaque in his memory was unveiled on the ship’s rescue boat by Wightlink Chief Executive Keith Greenfield and Rob’s widow Jackie Goddard.

“Rob was a valued member of the Wightlink family for many years. His hard work and dedication to his job on the Lymington-Yarmouth route were well-known and he will be much missed by all of us.”

A career on the water
An experienced mariner, Rob joined the Merchant Navy at the age of 17 and worked around the world on cargo ships, icebreakers and ferries before joining Wightlink in 2009.

He lived in Lymington and died from heart failure at the age of 60.

“Rob enjoyed his job at Wightlink and had many good friends in the company. Our family were touched to see so many of his colleagues at the ceremony and are pleased that his memory will live on through the plaque on the rescue boat.”

Life-saving actions
On a cold day in February 2017, Rob, with fellow crew member Andy Seton, took Wight Sky’s rescue boat to save a man and woman struggling in the water off Yarmouth after their dinghy capsized.

They pulled them from the sea, wrapped them in thermal protection clothing and took them to shore where the emergency services were waiting. Their actions were commended by the Shipwrecked Mariners’ Society and Rob and Andy won Wightlink’s Extra Mile Award for their prompt response to the emergency.

Wight Sky Captain Alex Procopuk paid tribute to his crew at the time:

“Rob and Andy acted in a calm and efficient manner, leading to the successful rescue. I would like to express my gratitude to them and let them know how very proud I am to be their Captain.”