During her time in the Solent, St Cecilia was used as a filming location for the BBC TV children’s programme Grange Hill and the French film, A Loving Father, starring Gérard Depardieu. 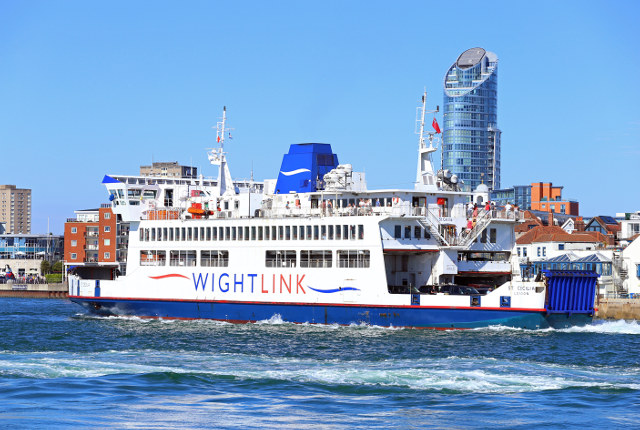 Karen shares this latest news on behalf of Wightlink

Wightlink will bid farewell to its oldest ferry St Cecilia on Friday 25 January 2019.

She will be retiring to the Mediterranean, joining her sisters St Helen and St Catherine at the Italian ferry company Delcomar which operates services between Sardinia and its offshore islands.

First launched in 1987
St Cecilia was launched at Cochrane Shipbuilders in Selby, East Yorkshire in 1987.

It’s estimated she has crossed the Solent 200,000 times since then – that’s around a million miles.

“Millions of Islanders and visitors have travelled to and from the Isle of Wight over the years on St Cecilia and she has been a reliable and efficient part of our fleet.

“We are delighted she will now be sailing in Mediterranean waters.”

During her time in the Solent, St Cecilia was used as a filming location for the BBC TV children’s programme Grange Hill and the French movie A Loving Father starring Gérard Depardieu.

They will be the 10:30 sailing from Portsmouth and 11:30 from Fishbourne. Contact Karen Woods at karenwoods@wightlink.co.uk for further details.

It will be sad to these ships go – I am sure St Faith won’t be far behind! The new Victoria and St Clare do not have the same feel as the old Saint class ships – a bit characterless I think. A relative in Selby worked on St Cecilia and St Faith as an apprentice- Cochranes now long gone and replaced by flats!

Yes, everytime a place of work shuts, it seems to be replaced by flats. More people, fewer jobs.

“heads off to a new life in the Mediterranean…..”

That sounds nice. Can we all go?

Only if you can afford to buy a ticket!

Well, it was a nice daydream for a while!

Vote Up10Vote Down
wighttool
I was sorry to learn of the sale of St.Cecilia. I had 10yrs or so as a Chief Engineer with Wightlink, most of them on the “Cecilia” ( She was no Saint but responded well to caring treatment!). In spite of senior managements aversion to spending money on maintenance she was a credit to her builders and machinery manufacturers. I have no doubt she will continue with… Read more »
Vote Up110Vote Down