Danny Ayres has been a star whenever he has ridden on the Island and he clocked the fastest time of the season at 69.3 seconds when winning heat one. 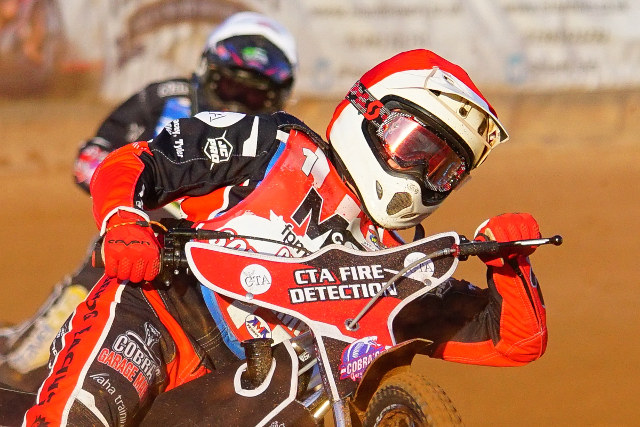 Isle of Wight 27 City of Portsmouth 23 City of Southampton 20
The Isle of Wight ‘Wightlink’ Warriors speedway team ran out winners of this week’s meeting at the Smallbrook Stadium after defeating select sides representing the Cities of Portsmouth and Southampton in a triangular tournament labelled the Solent Challenge.

Raced over twelve heats, there really wasn’t very much to choose between the three sides, however the four unbeaten rides of Danny Ayres (pictured) just tipped the meeting in the Warriors favour with both City sides being able to point to costly falls and retirements in a case of what might have been.

Looking at the returns of the Warriors regular seven, Ben Morley and Chris Widman both started well but hit problems towards the end, reserves Chad Wirtzfeld and Connor King seemed out of sorts and out of luck, Ryan Terry-Daley had probably his best meeting so far whilst Georgie Wood looked sound with three wins in an eleven point return and Danno Verge continued his improvement with some solid work towards the end of the meeting.

A special mention to Shaun Tedham making his seasonal debut. The ‘Cheeky Chappie’ had lost none of his rapport with the fans and was always creating a buzz in the thick of the action.

Ayres really has been a star whenever he has ridden on the Island and he clocked the fastest time of the season at 69.3 seconds when winning heat one. After the meeting he said,

“This has got to be one of my favourite tracks. I just love coming here. I feel so comfortable and confident on that track and the whole set up here just suits me.

“The management and all the people over here make this a lovely club to come to and whether I’m here for my own club or as a guest, I always look forward to racing here and doing well.

“I’d just like to say thanks to the Warriors management for booking me for this meeting and it will be a pleasure to come back again later in the season.”