Wightlink’s Chief Operating Officer was interviewed by BBC Radio Solent’s Julian Clegg this morning about Friday’s deck collapse – the investigations; how the deck works; safety check; reassuring passengers and an apology. OnTheWight has the full transcript. 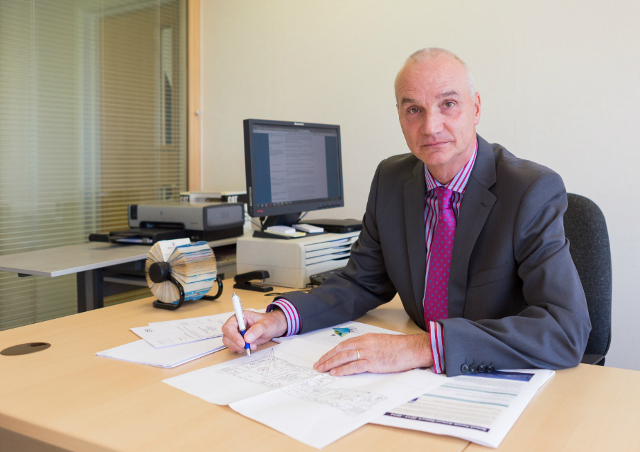 Following the incident on a Wightlink car ferry on Friday night, which resulted in three passengers and one crew member being taken to hospital, John Burrows, Chief Operating Officer for Wightlink spoke this morning to Julian Clegg on Radio Solent.

Highlights of interview
As the audio wasn’t available straight away on iPlayer (it is now, until the 28th. Interview is about 40 mins in), OnTheWight shares below the contents of the interview. Highlights from Julian’s discussion with John Burrows include:

The sequence of events
The seven minute interview started with John explaining what had happened on Friday evening,

“Shortly after the ferry arrived in Fishbourne on Friday evening, we’d discharged the main car deck and as we were lowering the upper car deck, before an end of it started to lower, and then for some reason it dropped and fell onto the bottom car deck.

“At this moment in time, we’re not exactly sure what the cause of the incident was, but clearly there were nine cars on the section of the deck that dropped. Those people at the front end suffered the largest drop and as you say, unfortunately three passengers and one member of crew were taken to hospital.

“The really good news is they were discharged shortly afterwards, after checks to no major injuries and we’ve since spoken to the crew member who’s been back in, who’s not back working I should add, and he described himself as a little bit bashed and bruised but fine. So the good news is that everybody is well at the moment.”

How the hydraulic system worked
Julian went on to ask whether there’d ever been any question over the hydraulics or how the car decks work.

“It’s a hydraulic system. We have a hydraulic ram that pushes on a pivot, which stretches and tensions the cables, so the deck lifts on cables. Once it’s lifted up into position, there are locks that come out from the side of the deck and lock the deck in place.

“Clearly you have to take those locks off to allow the deck to be lowered, but certainly to my knowledge and I’ve been at Wightlink for seven years and I’ve spoken to people who’ve been at the company since the ferries have been in operation for over 30 years, we’ve never had an incident of this kind. So it’s an extremely rare incident and a shocking one for all concerned.”

Any history of similar incidents?
Julian asked whether the incident had happened on any other ferry of that design. John replied,

“I don’t believe there are any other ferries of that design. I think that the three vessels that we have are the only ships of that class. There is one other which we previously owned and has been sold about four years ago to another company and to my knowledge they’ve not had any failures either.

“But clearly, what we are doing is we’ve been in touch with the MAIB and the MCA, they’re onboard the vessel, they were onboard the vessel on Saturday and yesterday and they’re on the way there again this morning. They’re there with our engineers and MCA surveyors and we’re in touch with our naval architects who were the same company who designed the ships and we’ll be in touch with the manufacturer of the hydraulic equipment to make sure there are no further incidents of this kind. We’re confident there won’t be.”

“The whole vessel is out of action. The St Helen has been taken out of service and is sitting alongside in Portsmouth and will not go back into service until we’re confident that the issues has been resolved.

“On the other vessels, are a slightly different design, but every vessel was inspected fully by our engineering teams and safety teams before they went into service and clearly we’ve also been liaising with the MAIB and the MCA and more importantly the company being satisfied that these decks are safe, those regulatory authorities are satisfied. They are independent, they have no axe to grind and if they felt that they were unsafe, they would’ve stopped us sailing these vessels.”

What safety checks have been carried out?
When pushed by Julian as to when the other vessels had been checked for safety, John replied,

“On the evening of the incident we were running two vessels at the time, we stopped the second vessel and we investigated and carried out a trial run and checked everything on that ship, so our customers were delayed for about half an hour as we went through that process and on Saturday morning, before the other two vessels went into service, our engineers and safety teams went onboard and went right through the whole system.”

Reassurance for passengers
Julian explained his reason for questioning was for the benefit of holiday-makers who might be concerned, John replied,

“I can reassure you not only did we check them fully before we put the vessels back into service we are checking them on a daily basis and every time before we operate the decks a visual inspection takes place.

“We’re very mindful our customers’ safety is our top priority and we’re not going to anything to compromise their safety.”

“The investigation will take as long as the MAIB require to go through the process. It won’t be a speedy process, I would be surprised if the report is completed within weeks, and it may be months.

“At the moment, the deck is still on place in the vessel and we will start to dismantle that deck for the MAIB so they can see what’s there, they can see the components and they will write a full report. That will be published in due course.”

“I’ve seen that photograph. It is a photograph of the cable on the car deck of the St Helen, what I can’t confirm is if that cable caused the incident, or the damage to the cable is as a result of the incident. It’s too early for me to say and clearly that’s something that the authorities will be looking into very carefully and closely.”

Apology
Asked by the Radio Solent presenter what message he’d give to passengers, John said,

“My message is that they shouldn’t be concerned, what I would like to do is apologise to everybody who, firstly was involved in the incident because it was an unfortunate and I’m sure uncomfortable experience and also apologise to those customers who were delayed slightly by the knock-on effect.

“But I can reassure our customers that we, as a company, wouldn’t have the vessels in operation if we felt they weren’t safe, the authorities wouldn’t let us sail them and the final arbiter is the master of the vessel. If he thinks the vessel is unsafe, will not sail it. And I cannot, and will not, put commercial pressure on him to do so.

“Everybody is 100 percent confident that these vessels are safe so our passengers shouldn’t be concerned.”

This is an interesting article, but I found the spelling and grammar to be very poor. Did anyone check before you published it?

Vote Up00Vote Down
Simon Perry
Glad you found it interesting – We did our very best to turn it around as soon as possible, as we know interest is high on this. ‘All of the spelling errors’ you speak of – we found five quite small ones (eg ‘to’ instead of ‘so’, etc) – have now been corrected. We quoted the spoken sections verbatim, so perhaps that’s where you’re finding the grammatical… Read more »
Vote Up00Vote Down
davidwalter

Sounds reasonable to me. I have no qualms about our sailing F-P booked on 1st August; just hope there won’t be delays due to St Helen being out of service.

They keep referring to nine cars, when clearly in some photos the deck was full up. What else are they misrepresenting?

Vote Up00Vote Down
RJC
Should have gone to specsavers I think, plus skimming through the articles and ignoring anything that goes against your scheme to damn everything you can about Wightlink. The forward mezzanine deck carried 9 cars. this was the deck that collapsed. I thought the questions were answered openly, why try and read something different into it. Nobody likes Wightlink, me included, but the amount of barrack room lawyers… Read more »
Vote Up00Vote Down
davidwalter

You’ll have skimmed through my posts then. I have not implicated WL. Neither do I dislike WL. I have no problems with them. Heck, it’s a ferry company, what do people expect? The Royal Yacht Britannia?

I find it very strange that the Chief Operating Officer was interviewed and not Mr Kew who has the ultimate responsibility???

His title might give you a clue. COO would be responsible for day to day functions and so be better able to answer questions than the top man who is very likely to be asking questions at this stage and presumably is also responsible for finance, marketing etc.

I have no direct knowledge of how Wightlink is organised but that is how many medium sized firms work.

Vote Up00Vote Down
ashleyh
This is a shameful firm. They’ve just sacked one of their seasonal staff for applying for too many complimentary staff tickets – despite management authorising every one of those very tickets. They don’t even give their staff any discount on travel – something they throw at the IWC and other firms. Shocking. And what happened to the manager who authorised the tickets? Nothing – they need to… Read more »
Vote Up00Vote Down
mw
WL offer all their staff travel. I am also aware that seasonal staff are granted this too. However there ARE limits as one would expect. It is written clearly in the rules what employees are allowed and implications should this be flaunted. I find your comment on this subject in the wrong forum as clearly this was about an incident that WL and the relevant authorities are… Read more »
Vote Up00Vote Down
sam salt
Ashley something wrong in your posting. They sacked a member of seasonal staff for applying for too many complimentary staff tickets – YET you say they don’t even give their staff discount on travel. Complimentary tickets are a perk – and taxable. Complimentary tickets allow people to travel free so it is a discount or are you living in lala land? Will the person you refer to… Read more »
Vote Up00Vote Down
tryme

I can see the distinction between a limited amount of complimentary tickets plus a regular discount on all other journeys.

Vote Up00Vote Down
tryme
I don’t think “I can reassure our customers that we, as a company, wouldn’t have the vessels in operation if we felt they weren’t safe”, quite strikes the right note. It just makes me think that this is exactly what they thought before the accident … and look what happened. It’s not the kind of reassurance that means much; but hopefully adherence to the recommendations of the… Read more »
Vote Up00Vote Down
Peter
From the description of the noise before ultimate failure; the failed cable if it is part of the lift/lowering gear is surely the cause. All lifting gear should periodically be Proof Load Tested to at least 2 x The Working Load. During this test displacements are observed and if excessive the load removed and the reason investigated. Before testing of course a thorough Inspection takes place. These… Read more »
Vote Up00Vote Down