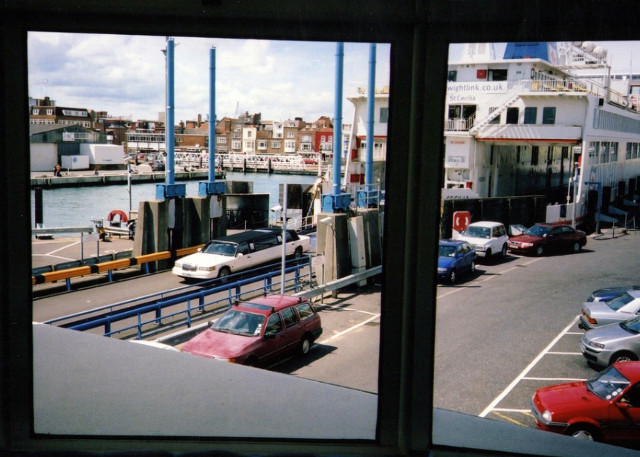 Many Islanders have contacted OnTheWight this week to express their outrage at being hit by considerable ferry price increases, now Wightlink have applied their new pricing plan.

When making the announcement, Wightlink labelled the changes as a “fairer and simpler pricing structure”.

Below are some examples from people who have been in touch.

£60 increased to £164 in a week
This morning Tony Wright, who runs a theatrical costume rental service based in Shanklin employing ten staff, phoned OnTheWight, “Last week I booked my van on the Portsmouth route for £60. I did the same yesterday at 4pm and saw the price had jumped to £164.80. That’s close to a 200% increase.”

Tony went onto describe that the Islander booking discount that used to be applied to his van booking has now been removed and Wightlink have decreased the size of vehicles to 5 metres. His van is 5.1m, which they now class as ‘Freight’.

Increase “Outrageous”
“The increase is outrageous,” he said, “It will kill Island-based businesses that trade with the Mainland.”

During his busy seasons, he travels to the Mainland three times a week, so he says his costs will go up £300 a week. “We won’t be able to afford it. It will have a huge impact on the Island. I don’t think people realise.”

Yarmouth route increases
National award-winning garden designer, Tim Brayford, left a comment about a dramatic price increase, so we called him to find out more.

Tim said he travelled on the Yarmouth route to the Mainland last year in his 5.2m 4×4 vehicle that Wightlink rate as a passenger vehicle. That was at 8:50am on a Sunday in February, which he paid £41 return for.

He researched the same journey on the new system and was quoted £71.60.

Motor-home hit too
Sharon West contacted OnTheWight through our Facebook page about her Island-based Motor-home. The before and after pricing rose from £69.30 to £151.60.

“How fair is that?” she commented before pointing to Wightlink’s press release

“Wightlink has invested in a new booking system that will improve the reliability of reservations and ticketing for all customers. It will enable us to develop a new simpler and fairer pricing structure.”

Awaiting Wightlink’s response
We’ve contacted Wightlink to see if these examples are representative of the price changes they expected, but at the time of publishing, we hadn’t heard back from them. We’ll update you when we do.

UPDATE 14:44 – Wightlink have sent us this statement and the press contact we emailed has now left the company, hence us not receiving replies. We’re await answers to specific questions.

newest oldest most voted
dave
disabled wheelchair accessible vehicles are more often longer than 5 meters they have now penalised disabled travellers way and beyond inflation summer season prices for extended return from the island for a 5.2m people carrier was £44 now winter rates extended return costs £90 plus. and that’s with disabled blue badge discount , Wight link you want to be ashamed of yourself and you clearly did not… Read more »
Vote Up10Vote Down
retiredhack
The vehicles which seem to have been hit hardest by this are those between 5m and 6m in length, which were previously classed as cars. In truth, this was an anomaly, because even the bigger people carriers, e.g. Citroen C8 and Ford Galaxy, come in at under 5m. Anything longer than 5m I would struggle to call a car. This is, of course, not to say that… Read more »
Vote Up00Vote Down
Charles Courtney

It is not true to say that anything over 5m can’t be a car. For example Audi Q7, Audi A8, BMW 7 Series, Mercedes S class are all cars that are greater than 5m in length. My Audi Q7 car is a couple of inches over the 5m and I am faced with a 30% to 50% price rise.

A friend of mine has one of those Suzuki vans, quite a small thing. He was always irritated that it was classed as commercial, even though some of the “people carriers” that were bigger were classed as cars. Needless to say that he’s pleased now that he’s under five metres and can now get a ticket at the same price as a car.

Stop talking about it, organise a picket at the terminal and demonstration.Then organise a boycott.

Totally agree Mat, stop talking and organise a blockade, boycott or both.

Vote Up00Vote Down
Tim Brayford
My Nissan Navara is all of 28cm over the 5.0m limit, this puts it into the same category as a 12m long motorhome built on a 7.5 tonne lorry chassis, and nearly doubles the cost of traveling, how is this fairer pricing? I cross referenced this with Red Funnel’s price which was broadly comparable with the pre-increase Wightlink one. IF YOUR VEHICLE IS BETWEEN 5.0m & 5.5m… Read more »
Vote Up00Vote Down
Dalek

Just witnessed someone trying to buy a new multilink pass thing for their car. They needed photo ID, but they have an old no-picture driving licence and they don’t have a passport. Caused some problems. Eventually, they accepted their existing Wightlink passenger ID card as proof.

Vote Up00Vote Down
the auditor

Looks like we’ll be using Red Funnel next time. Wight Link or should it be S**teLink seem to have scored an own goal with this one ….

Vote Up00Vote Down
david
we use a small camper van slightly more that 5 meters always been charged car rate, now quoted commercial rate due to 6m reduced to 5m, had to cancel going to see family this festive season, just cannot afford the massive increase to more than double. will try red funnel tomorrow for a quote. how do they get away with such a massive increase. The govt should… Read more »
Vote Up00Vote Down
Steve Goodman

There is indeed a very good financial & environmental case for nationalisation of our public transport.

(Anyone disturbed by the use of the n word may be reminded of the continuing rescue of dishonest & incompetent bankers. Or the stupidity of selling, way under price, the now profit generating Royal Mail.)

Vote Up00Vote Down
retiredhack
I bet Tory councillors Stewart, Whitehouse, Whittle and Ward, who trumpeted their meeting with Wightlink in September as making sure “that Wightlink better understands its customers and how we can work to boost the Island economy” are proud of their efforts. An initial analysis of the fare changes makes it perfectly clear that small business vehicles (5 to 6 metres) are the chief losers. Fortunately we now… Read more »
Vote Up00Vote Down
Dying Island
The tourist trade is all but gone, this will hammer in the final blow to that. I look around and see a shabby dirty Island where public toilets are virtually non existant, towns full of charity shops & cheap budget shops with only a handfull of independant traders struggling alongside. I’m not saying the grass is greener but these new ferry prices are the final death. It… Read more »
Vote Up00Vote Down
Jude Eagle

How to finally crucify the Island and all who live here, bridge time?

Vote Up00Vote Down
Concerned of Wootton
Every time Wightlink increase their prices, there is a few weeks of baying, comments posted here, cries of ‘Andrew Turner should do more,’ this council should do more, etc etc etc. And yet, Wightlink still operate, so somebody must be (or have to be) using them. I do not condone in any way this price hike, but without action, Wightlink will continue to abuse their monopoly of… Read more »
Vote Up00Vote Down
mittromneylovesiow
Once upon a time there was a very clever salesman. He wanted to add 20% to the cost of his product knowing full well buyers would be up in arms. So he raised the price by 160% and then backed down at a later date to 20%. The buyers fell for the ploy. Then he said I’m going to put up other goods by 10% but I’ll… Read more »
Vote Up00Vote Down
paul culshaw
I operate a van of 5.2m as a private vehicle and will be stung. I was told a story recently where a customer who was unhappy about s**telink imposing a stupid fare because his van and trailer was 1 inch over the length, and was forced to pay for the same area as a much larger vehicle. When being boarded he refused to move up to the… Read more »
Vote Up00Vote Down
Eddy Yacht

Hehe, hadn’t thought of that one.

Vote Up00Vote Down
Darcy
Sounds like the basis of a great non-co-operation campaign to me. If you are now paying unnecessarily for increased length, make sure you use it all by parking the unused difference in front of you. The biggest discrepancy I’ve found is if you have a large car over 6m this goes into the category of low passenger vehicle with a space allowance of 17m. You run the… Read more »
Vote Up00Vote Down
DH

Wightlink do not deserve to have the word Wight in their name. They don’t serve the Island’s interests, they serve only themselves. Shame on you Wightlink.

I just checked how much Wightlink would charge me for the same booking I had with Red Funnel. It was a whopping 25% more.

If I was Red Funnel I would be looking at expanding services.

The categories on the online booking system have been changed yet again since this morning. For my Nissan Navarra which is just under 5.3m long I have actually got to pay for a space for a vehicle up to 3 x the size at 15m! How is this “fairer pricing”?

How about launching an e-petition on yougov asking for an investigation of Solent ferry prices?

Perhaps one of our elected representatives would launch it?

We have a motorhome 5.4m long, we try and get away for 8 or 9 weekends on the mainland a year. Ferry price has now gone up from around £55 to around a £100! we will now not be able to use the ferry. As most people with motorhomes are holidaymakers this will reduce the number of visitors to the island and affect all island businesses.