The English Heritage-run garden at Queen Victoria’s seaside home on the Isle of Wight is commemorating the 100th anniversary of the end of the First World War. 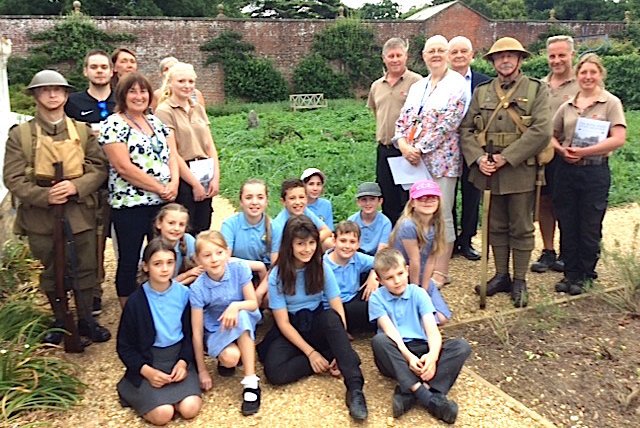 Children sang popular wartime songs and volunteers dressed as soldiers for this week’s moving launch of a new “battlefield to butterflies” wildflower plot at Queen Victoria’s holiday home at Cowes.

The site in the walled garden at Osborne House is in memory of Britain’s parks, gardens and grounds staff who died in the First World War.

Flowers planted by children
Wildflowers planted by the children, from the Community Kids after school club at The Bay Church of England Primary School, Sandown, are creeping over the ‘battlefield’ plot, with its replica bomb, craters, skeletal trees and barbed wire.

The children brought delight at the event on Tuesday by singing songs including, We’ll Meet Again and When You’re Smiling. A poem, ‘Battlefields to Butterflies’ by David Thornton, was recited by horticultural trainees Catherine Mawdsley, Rose Greves and George Tyler.

Kate Collins, deputy Lord Lieutenant of the Isle of Wight, attended along with Mike Fitt, 0BE, chairman of the Royal Parks Guild, who helped organise the project and is also former Deputy Chief Executive of the Royal Parks, and Toby Beasley, English Heritage Head Gardener at Osborne. Mr Beasley and his staff created the plot. Children and staff work in the garden

There was also a message of support from Isle of Wight Conservative MP, Bob Seely who is planning to visit the site next month.

They would have walked in the walled garden to aid their recovery.

Search for forgotten heroes
Meanwhile the search continues is for descendants of two forgotten heroes from the Isle of Wight – both Royal Parks staff – who died in the First World War.

Ernest Owen Johnson, a father of six from East Cowes, was a gardener at Osborne House when he was drafted into the Royal Naval Reservists to fight in France in 1917. He died during the Battle of Cambrai age 42. Children about to ‘plant’ white crosses they have made

Charles Mew, from Prince Street, Ryde, was 46 when he died in the battle of the Somme in 1916. More than one million soldiers were killed or injured in that fight.

Mew, a father of three, worked at Richmond Park, one of London’s Royal Parks. He was a regimental sergeant major in the army who won medals in the previous Boer war. Chairman Mr Fitt said that the meadow took its inspiration from the work of war artist William Orpen.

“He witnessed the mud, desolation and destruction of the Somme landscape first hand. When he returned months later he found to his astonishment a carpet of wild flowers, thousands of butterflies.”

“This tribute to garden workers from Osborne House who died in the First World War is a very fitting and poignant. It certainly has my full support and I am very much looking forward to seeing the wild flowers this summer.

“I would also like to express my hope that more can be found out about the descendants of those two local men who died in France more than 100 years ago in the service of their country.

“To find relatives of Ernest and Charles would be a fantastic achievement for Battlefield to Butterflies.”

Report and Images by Peter Gruner