Will you be taking part in Isle of Wight Goatober?

It’s been happening around the world for sometime, but this is the first Goatober to take place on the Isle of Wight, raising awareness of goat meat, milk, cheese and fudge produced on the Island. 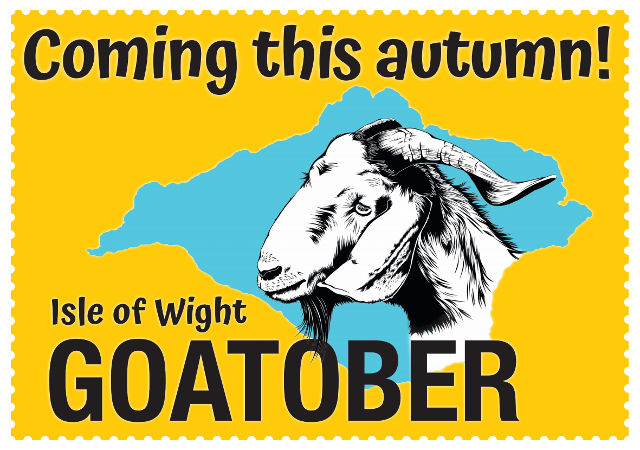 This October, the Isle of Wight’s very first Goatober will be launched, in an effort to raise awareness of goat meat, milk, cheese and fudge produced on the Island.

Kingston Smallholding Goat Farm and Green Barn Dairy Goat Farm, are calling on Isle of Wight residents to support them and your regular butcher or meat wholesaler by adding their goat products to your menu throughout the month of October – and in the future.

The Short History of Goatober
Surplus goats have traditionally been culled in October prior to the breeding season in November, to reduce feeding demands and costs during the winter months.  Goatober was first established in Brooklyn, New York, in 2011, when goat keeper, Erin Fairbanks, and her goat-cheese-making friend Anne Saxelby decided to capitalise on this surplus by creating a month-long celebration to promote the consumption of goat meat and dairy products.

The campaign was a roaring success and from tiny embers the flames quickly fanned across America – and then went global!

Spanning the globe
Goatober reached the UK in 2016, and mainland Europe in 2017.  Goatober events are now held around the world in countries that previously consumed very few goat products.

Suppliers, retailers and chefs work closely together to promote all manner of exciting events – or just to increase the number of menu options.  The campaign aims to put at least one goat meat and dairy dish on the menu throughout October and to encourage people to try cooking it at home.

Goatober event
If you wish to hold a Goatober evening and would like Simone and David to give an after dinner talk, please contact them to make arrangements:  (01983) 551527.

You may also wish to visit Kingston Smallholding to view the goats.

Goat Products
Goat is the most commonly eaten red meat in the world, as many cultures do not eat beef or pork.  Goat meat makes up around 60% of the red meat produced worldwide and yet in countries such as the UK – where the wool and lamb trade has dominated – it has always been one of the much lesser consumed meats.

However, because of increasing ethic diversity it is starting to become far more readily available.

Fast or slow cooking
Goat meat is especially popular in India, Southern Europe, the Middle East, Africa and the Caribbean.  Ribs, loins and tenderloins are used for quick cooking.  It takes longer to break down the collagen in other cuts, so this tends to be used for traditional slowly cooked stews and curries etc.

To increase flavour and reduce waste, these goat dishes are usually prepared and cooked on the bone.  Many other recipes are available according to personal taste.

How might you use it
Goat meat is also popular in pies, pasties and stir-fries.  Goat mince makes fantastic goat shepherd pie, lasagne, meatballs, chilli and bolognaise.  Goat sausages and burgers are also great additions to any menu – especially on Halloween!

Goat meat is leaner and has fewer calories and less cholesterol, fat and protein than beef, pork, lamb or even chicken.  Goat milk, cheese and fudge also have similar health benefits and can be used for a variety of different dishes.

Kingston Smallholding Goat Farm
Nestling at the side of the B3399 between Shorwell and Chale Green, Simone and David have created a six-acre smallholding.  They started off with a small herd of Golden Guernsey dairy goats and Pygmy goats, and then bought some Boer meat goats.

Pygmy goats make popular pets – and great attractions in pub gardens.  Goat meat has been available on the Island for a number of years, but commercial production has not been regularly maintained.

Some of these quickly added goat meat to their main menu.  Others have added it to their specials boards.  All have reported great interest from diners and from a virtual standing start earlier this year overall consumption rates on the Island are now accelerating quite rapidly.

To place goat meat orders, please chat to your local butcher or meat wholesaler – who will in turn order from Kingston Goat Farm.

Green Barn Dairy Goat Farm
Situated on the A3054 approach road to Yarmouth, Michelle, Richard and family started the Island’s first and only commercial dairy goat farm in 2013.

Point of Sale Material
If you would like any point of sale material for your shop counters etc, please chat to Simone (a freelance Graphic Designer and Illustrator) and she will endeavour to ‘meat’ your needs.