This is something we’ve had quite a few Islanders speak to us about over the past few weeks. OnTheWight gets to the bottom of what looks to be the real reason for the rush. 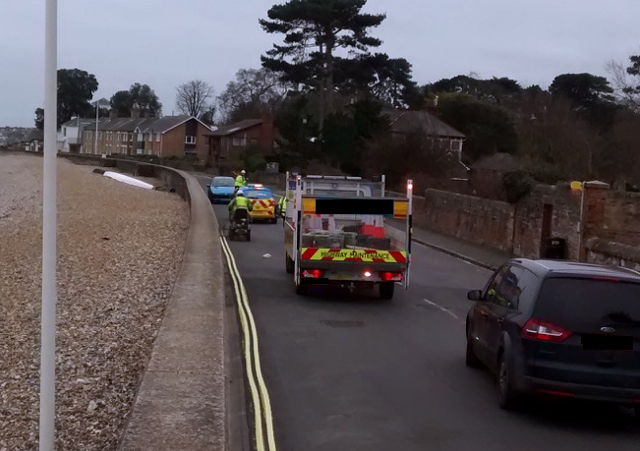 If like OnTheWight reader, Keith Wolton, you’ve been wondering why you keep seeing Island Roads repainting lines on roads that clearly need resurfacing first, we have been diggin to find out the the answer for you.

Like many others who have got in touch with OnTheWight recently, Keith was surprised to see lines being repainted on a road that quite clearly needed attention in other ways.

(Fear not, they’re not new yellow lines, but over-painting existing ones.)

“I was going for quiet run this morning, when I was amazed to see lines being renewed on a road surface of poor quality. The place in question was Seaview Duver, between Puckpool Park and Seaview.

“Given that it is only February and off season, I see no urgency to renew lines prior to road repair works, and you will see from the photos that considerable manpower was in use to complete the job!”

However when OnTheWight got in touch with Cllr Phil Jordan (the Executive member in charge of the PFI) he was able to shed a little more light on the mystery.

Explained
Cllr Jordan explained that Island Roads were contractually required to bring all lineage across the Island up to the required level by 1st April, otherwise they’d be looking at hefty penalties.

It’s all part of their half yearly Milestones built into the PFI contract.

Double payments?
We’d asked whether Island Roads would be paid twice to paint the lines, before and after the resurfacing.

You can at least breath easy on this – He gave us an emphatic “No!” in response.

29 Comments on "Wondering why Island Roads are frantically re-painting lines on unrepaired roads?"

The real reason? The demand for IR cash flow to leak eventually into VINCI/Meridiam accounts in tax havens. Simples!

There is a milestone clause that calls for all lineage to be brought up to a required specification before 1st April 2015…!

As Council Tax paying Islanders, what can we do to help the IWC ensure Island Roads has our money withheld from them?

Vote Up00Vote Down
Steve Goodman
Probably a case of ‘bit late mate’, as we cannot travel back in time to ensure better outcomes; what we could do to minimise similar further expense & harm nationally & locally is be better informed (Private Eye is a good place to start), and be more active politically, even if it’s just supporting suitable online petitions (Avaaz & 38 Degrees are good places to start). Also… Read more »
Vote Up00Vote Down
Cynic

…. and there is no “milestone get out clause” favouring IR? Check again Phil!

According to the news, the West Midlands are rushing to spend their Government money for the potholes and road repairs. In Stafford, Walsall, Birmingham and Coventry they have to spend it by April.

We have none because Turner’s lot have said we have a PFI contract who are fixing our roads adequately.

They are rushing it too. Some shocking line painting around our area. Lines are very crooked!

Yes, they were doing them by hand at the end of our road, and they are all over the place

Vote Up00Vote Down
phil jordan
John Thomas: There is a milestone in the contract that calls for ALL lineage to be(re)painted and up to specification before April 1st 2015. I am very interested to hear about the quality of the work since that must be to a required standard… interested to hear the specific whereabouts of this and any other place where the quality of lineage is poor…. [email protected] will get to… Read more »
Vote Up00Vote Down
phil jordan

Please let me have the details of where this is….?

Have you been drinking DH?

I’m sure if we dig deeper, there will be more to the fact that roads haven’t been resurfaced due to inclement weather.

Vote Up00Vote Down
Robert Jones
Over the last few weeks, road markings in Castlehaven Lane, Niton Undercliff – which leads almost nowhere – have been repainted, plus markings on Undercliff Drive which lead straight to the landslip. Road markings on Barrack Shute/Institute Hill, and St Catherine’s Road to the Buddle Inn have so far been left untouched. If there is any logic in this, Lord God in his remote serenity knows where… Read more »
Vote Up00Vote Down
Don Smith

I saw four man lowing a kerb in my close. They did a real good job. I heard a my wife call, “Don you breakfast is ready”. Oh dear! I’d been dreaming yet again.

Don’t let up on them, I’m really impressed at how you are tackling this head on. Will there be regular updates to the Executive meetings on the performance of the contract?

Yes, there will, when appropriate.

Vote Up00Vote Down
kay ounsworth
For crying out loud, leave them alone! They’ve been working their socks off. If they’re not being slated for apparantly sitting about doing nothing, they’re being ridiculed for the work they are doing! They’ve worked real hard in my area and beyond and been polite and responsive to queries. If you really want to know what is going on, ask them! Island Roads get treated as if… Read more »
Vote Up00Vote Down
ThomasC
‘they’ might be. Unfortunately they work for a private company that is sucking the life out of our social care services and other vital lifelines for Island residents. Previously, in times like these the IWC could cut the spend on the roads. Not now – oh no, roads spending is ring-fenced, by the Conservatives to ensure no matter how much our schools and other services need money… Read more »
Vote Up00Vote Down
Cynic

Don’t confuse IR workers with IR management and their financial leech owners! Nowadays IR can hide from FoI, something that the IWC could not do.

Some workmen work hard some do not. What annoys people is seeing a set of traffic lights around a couple of lorries with people sitting in the cabs reading the paper.
Near Sainsburys Garage,temporary lights had been placed. One young man was sat on the kerb in his fluorescent jacket and protective hat apparently chatting on his mobile. Good on site supervision is needed.

Vote Up00Vote Down
JohnR
They were still working repainting lines at the Park & Ride Cowes about 18-30pm the other night, this is after they had done numerous non important side roads etc all around the area. The one thing they can’t quite get right is the Yellow Lines for parking restrictions. I have in the past sent in at least 8 or 9 photos of incorrectly painted yellow lines in… Read more »
Vote Up00Vote Down
phil jordan

do you want to let me have exact details…?

Hi Phil,
Couple of example pics / details on there way to you.
Thanks

thank you….please have patience from here…

Instead of painting yellow lines for contractual reasons they would have been better employed filling the water filled crater that destroyed my tyre, rim and wheel trim that wasted a whole daylight day in th afterwffects of their negligence, what a Bunch ?????????

Vote Up00Vote Down
Damian
Let’s not forget we elected those who got us into this pfi, ‘re-organised’ the schools and everything else we may take grievance with, our chance to do something about it is when we vote both nationally and locally. Don’t let yourself be swayed by the sudden call to action by these companies or those who want your vote as they too are in a flurry of activity… Read more »
Vote Up00Vote Down
Darcy
I certainly didn’t vote for PFI and I don’t know anyone who did, even those who sadly voted for that lot out of habit, prejudice, ignorance or apathy. Unfortunately, our electoral system can’t pick and choose individual policies despite the fact there were enough of us who warned the former cabal of the dangers. On the island we are blessed with thousands of voters in care homes… Read more »
Vote Up00Vote Down
incomplete...
well, 1st april has been and gone. there are still lines missing in Lake, yellow lines between lake and shanklin, white lines on lake high street, the 2 lanes at lake traffic lights are not marked properly, hatched areas on the corner are missing, and the bus stops have not been resurfaced between shanklin and lake whilst the roads have. So… what penalty will Island Roads face,… Read more »
Vote Up00Vote Down