Over 30 trees are planted to commemorate local heroes of Yarmouth and its surrounds. A fantastic community effort. 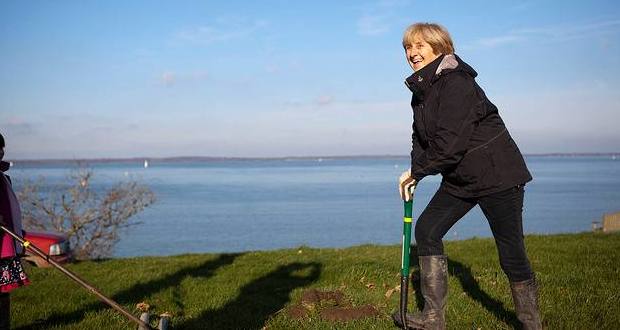 Readers will remember a couple of weekends ago, we mentioned that a community planting session was taking place in Yarmouth.

If you have driven past the plot of land you’ll have seen that over 30 trees have been planted in the Local Heroes Community Orchard.

The trees were planted in recognition of nominated local heroes, who ranged from RNLI crew members to coastguards, bee-keepers to teachers and more.

Experts on hand
Apple experts from Brighstone, Alison and Dave Harding, were on hand to tell people about their chosen trees.

Many thanks to Jill Cowley for sharing the details of all the trees that were planted on the day and who they were planted to commemorate.

Jill tells us that Yarmouth town council has budgeted to look after the orchard, ensuring future crops. In years to come, it’s hoped the orchard will be used as learning tool for pruning, healthy eating.

What a great idea.

Remembering their services
Four grandfathers who have given their services to the community over many years were recognised with apple trees.

A Blenheim Orange (an apple he may well have known) was planted for Walter Cotton, who served 20 years as Coxswain of first Yarmouth lifeboat and was awarded RNLI medal for Gallantry in recognition of 134 lives saved.

An Ashmead’s Kernel apple tree was planted for Albert Hayward, a Yarmouth Lifeboat mechanic between 1930-49. He had also received a gallantry award for 130 lives saved.

An Island apple, the Steyne Seedling, was planted in honour of Henry Cooper, who lived from 1877 to 1969. He was the bee-keeper of Thorley who first identified ‘Isle of Wight Disease‘ in bees.

Present and past lifeboat crew
Present-day lifeboat crew also planted a tree nominated for them, John Downie – and crew of first Lifeboat ‘BASP’ 1924-34 had Sunset dedicated to their memory so four trees for the lifeboats.

They had petitioned against gates erected to prevent access to Pier Forshore, and who took them down when non-elected council wouldn’t and thereby preserved our right of access to foreshore.

Young and old
Nine year old Hannah Blake planted ‘Discovery’ – a good apple for children – to commemorate the founders of the Yarmouth Recreation Ground. She is the fifth generation of her family to play on the ‘Rec’.

‘Charles Ross’ chosen by Paul Buckland of Yarmouth and Calbourne FC. Apparently it will grow on most soils and as they will play on most pitches, it commemorates grass-roots football.

Protection from scurvy
‘Hunt House’ reputed to be the apple taken to sea by Captain Cook to protect his crew from scurvy, was dedicated to Stuart Dyer, ex-Naval man, IWC lecturer and county councillor for Yarmouth.

Commemorating the women
Deputy mayor Sylvia Mence nominated a plum tree ‘Herman’ in recognition of women of Thorley and Yarmouth who have served in nursing, WRVS, Land Army and Lumberjills, and as First Aiders in war and peace and didn’t seek praise or recognition.

Her tree was planted by Luke Richards of IW Orchard group, and his four children.

Phil, as First Responder then received a call and had to rush off to a ‘shout’ illustrating the point that family life may often be interrupted.

‘Howgate Wonder’
Mrs Rita Dedman who has lived at a house at The Mount since they were built, was there to see ‘Howgate Wonder’ dedicated to her husband Ken Dedman MBE, who was born the year this Island apple was introduced. Her neighbour, Mrs Pat Fletcher held a little party afterwards.

Fantastic legacy
Congratulations to all who took part in this excellent community project. We look forward to watching the orchard bloom next spring.

All images reproduced with kind permission of Thomas Cowley. The full set of images taken on the day can be found within Thomas’ Flickr set.

Indeed – as it says at the end of the article, “All images reproduced with kind permission of Thomas Cowley.” Here’s got some great shots there hasn’t he?

A lasting community legacy, one worthy of the ‘Eco’ tag.

Be nice to see a lot more of the same.

A terrific idea to commemorate local heroes. I had never heard of the Malcontents of 1877.
Maybe we could have ways of commemorating more of them – like the heroes of the Sirenia and Irex rescues, King Arwald, Peter de Heyno, Ferguson Gang &c