The lack of communication due to no hearing aids has led to isolation and increasing signs of dementia for this older Ventnor man, says his daughter. 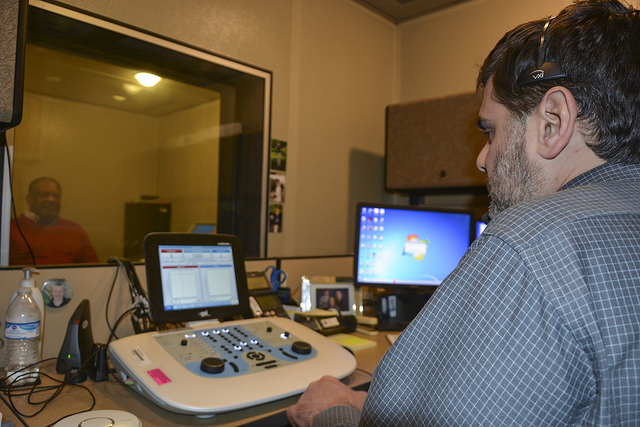 Unable to hear, and growing increasingly isolated, an elderly Ventnor man has been waiting almost a year for hearing aids.

Now his daughter fears the isolation and lack of conversation is accelerating signs of dementia.

He then had a formal assessment in February.

“We heard nothing after that.”

No fitting before January 2019
Now, almost 12 months later, Carol has been told it will be January before he is fitted for hearing aids.

Over the summer, Cyril was fitted with smaller digital hearing aids, and Carol said the change was immediate.

“He was sitting down in the living area, making conversation with people for several hours at a time.”

Doing more harm than good
However, Carol said the hearing aids were only on loan and she had to return them. Staff were also unsure how to use them and they were being used without batteries which was making his hearing worse.

“In the end, people were worried about breaking them, so they were doing more harm than good.”

Increasing isolation taking its toll
Carol enquired again about the NHS hearing aids, but was told that due to a lack of audiologists, it would be several months until he was seen again.

“The lady even suggested I look into training in the field as workers are so thin on the ground, but I don’t understand why nothing practical is being done to address the problem.”

She said she feared the increasing isolation was taking its toll on her dad.

“Now when I go and see him, he is sat alone in his room with the TV up really loud. He’s in his own little world. I have to shout quite loudly for him to be able to hear me.

“It is awful, I feel really sorry for my dad.”

Lack of communication leading to dementia
Carol said she worried not being able to communicate properly meant her dad was showing increasing signs of dementia.

“We have unprecedented vacancies in the audiology service and despite repeated recruitment drives we have so far not been able to fill them.

“We have employed some additional locums to support the service. However due to the level of ongoing vacancies we are currently unable to provide the level of service and achieve the waiting times we planned to deliver. Regrettably this means patients are waiting longer than planned for routine hearing aid fittings.

“All new referrals are continuing to be seen within six weeks and all complex adult cases and children are receiving timely treatment. High risk patients are fast tracked at diagnostic stage and assessed and treated accordingly.

“We are working with NHS commissioners locally to source additional capacity and are doing all we can to resolve the situation while working to develop a long term solution.”

Image: veteranshealth under CC BY 2.0

I do not understand if new patients are processed within 6 weeks, why in Cyril’s case, an islander, it took so long?