How often have you said you must check out an interesting shop or attraction, only to find out when you eventually get around to it that it’s closed down? 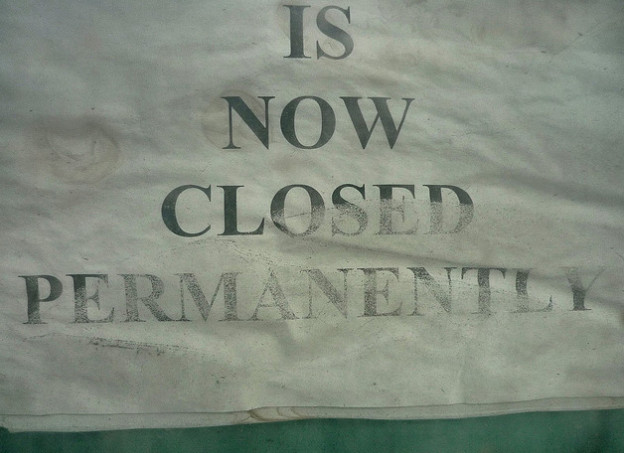 Our thanks to long-time reader and OnTheWight contributor, Wendy Varley, for this interesting observational piece. Ed

“We really should check that place out,” I’d say to my son whenever we drove past the Isle of Wight Military History Museum on our way to the Red Jet at Cowes.

“Mum, we still haven’t been there,” he’d say, as we whizzed past it again the next time.

“They do moving tank displays on a Wednesday, I think. We must come back on Wednesday,” I’d promise, vaguely.

Serve me right
We never did go back on that or any other Wednesday, and now it’s closed. Serve me right for my apathy. (And presumably many others like me.)

What was it like in there, anyhow? Did anyone ever stop to find out?

Crowd-funding to save old cinema
I thought about this when I read about the campaign to save and reopen the art deco Sandown Rivoli Cinema. A worthy cause? Absolutely!

Will Bruce Webb, who’s coordinating the campaign, raise £250,000 to buy it by January 2014? It’s a lot of money, but I hope so. Have I contributed anything yet? No, but I intend to. Would I go if it reopened? I like to think so. But then again, I don’t live near Sandown…

Use it or lose it
So often, we really don’t appreciate what we have until it’s gone. We’re too busy or complacent to notice or patronise what’s on our doorstep. And that’s a shame.

Here are a few things I liked that have disappeared from the Isle of Wight since I moved here 15 years ago. Please do add to the list by commenting below.

Rare Breeds Park, St Lawrence
The park had one of the biggest collections of rare breed farm animals in the UK, and I loved taking my daughters for bracing walks along the windswept cliff-edge paths to see longhorn cattle, quirky sheep and goats, and snappy geese with a scary sense of entitlement.

In the gift shop, a lady would demonstrate how to tease wool from fleeces and turn it into thread on a spinning wheel.

Sadly, the double whammy in 2001 of the foot and mouth crisis, which made farm attractions no-go areas, and the landslip on Undercliff Drive which affected road access, spelled the end for the Rare Breeds Park.

We also used to visit the nearby Tropical Bird Park, which closed in 1999. There’s rumoured to be a kookaburra population in St Lawrence, descended from escapees from the aviary. Is this true? Anyone know?

Yafford Mill
It had a working water wheel, and mill exhibition; an array of ancient farm vehicles and equipment, including stationary tractors for children to clamber on; a rough and ready adventure playground; a nature trail past fields of ponies and goats and through woodland.

You could throw fish to Sophie the seal at feeding time, in the large pond near the front gate. It was another low-key attraction that charmed my daughters (and me).

Yafford Mill closed to the public in 2000 and became a private home. Sophie, who had lived there for 25 years, (the last ten on her own, after her mate died) was re-homed at a seal sanctuary in Cornwall, where she passed away in 2006. The farm and play equipment was sold off. One of my friends bought the massive wooden fort and installed it in his garden.

The water wheel has been restored, but doesn’t usually turn. I often walk our dog round the local lanes, and during the decade after the mill closed, I’d happen upon confused families who were on a pilgrimage to find it. They were crestfallen when they realised it had shut up shop. (But as most hadn’t visited for five, ten or 20 years, was it any wonder?!)

Shops!
There are shops I miss. Even chain stores. Woolworth and Adams both closing down in Newport in 2008 sent me into a “where now?” children’s clothes-buying panic.

I know I’ll miss HMV when it shuts (though – tellingly – I can’t remember the last time I bought anything there).

Loyalty tested
And I hate to see independents go under. It was the end of an era for me when Godshill Organics closed in 2012. I was a fan of their seasonal winter greens (curly kale, cavalo nero), and the variety of weirdly-shaped and coloured squash that appeared each autumn. They stocked some of my favourite treats: Dragonfly’s Moroccan Mint tea, Roskilly’s ice-cream, Montezuma’s chocolate – most of which I can find elsewhere if I go far enough, but not all in the same place.

But with the expansion of other farm shops like Farmer Jack’s and Briddlesford, my loyalty was tested.

Organics took a further hit during the recession, and everyone at my pilates class started talking about how they were shopping for bargains at Lidl. The writing was on the wall.

It’s a sure sign of the times that the friendly face of Godshill Organics, Lee, is now manager of the new branch of budget supermarket Aldi in Northwood. I popped in there last week to say hello… and picked up some very good (non-organic) dark chocolate for £1.09 while I was there.

History Pin
This nostalgia for what’s been and gone reminds me of a fascinating resource I came across lately, Historypin.com, where you can digitally pin historical photographs of your local area, or indeed of anywhere in the world. There are some great pics of the Isle of Wight. Take a look.

What do you miss?
What have you been sad to wave goodbye to on the Island?

newest oldest most voted
yjciow
Years ago when there were no mainland shops/stores on the island you had locally owned independent small shops and some bigger ones Like Wadhams, Dabells, Packs and Fowlers etc. Once M&S arrived it opened the flood gates. Now what do we have? Closed shops – Jessops, Blockbuster, HMV and coffee shops – Costa and Starbucks coming. I’d like to see smaller local shops supported by the IW… Read more »
Vote Up20Vote Down
Mark Francis
As a boy I went up to the old barracks on Culver Cliff which was a ruin and fenced off as being dangerous with a friend called Paddy O’Grady. In the middle was the remains of a stage with a painted backdrop with a huge and beautiful mural painting of white horses leaping in the surf.I can remember it very clearly, but apart from my memory (&maybe… Read more »
Vote Up20Vote Down
Mark Francis

Vote Up10Vote Down
septua
Wendy’s comments about Godshill Organics was particularly poigant. My wife and I used it at least twice a week from our arrival on the Island in 98 until it closed, and we bought a wide range of organic products there. It was very sad when it closed, and we still miss it and the friendly staff there; it could have remained in being if customers had remained… Read more »
Vote Up10Vote Down
tryme
I loved Godshill Organics for many years, supported them to the tune of thousands of pounds. I don’t like to be called disloyal after all that committment! But latterly the all-important traceability slipped for the customer. Staff often weren’t sure which country fresh fruit and veg was from, & there was no longer anything on it or the container boxes to confirm it was organic,(a change from… Read more »
Vote Up0-1Vote Down
batwick

I was that friend…

I presume the fort went for firewood eventually?

And in the few days between me writing this piece and it being published, HMV in Newport has closed. Another one bites the dust.

Vote Up00Vote Down
Old Knobby
Blimey, didn’t realise the Tropical Bird Park and Yafford Mill were still open that late. I thought they closed by the late 80s, would have liked to have gone back to those as we used to go as kids and memories are bit vague now. Also missed Brading Wax Works, never did get around to going back as an adult and then it closed. As you and… Read more »
Vote Up00Vote Down
Wendy Varley
Ooh yes! Brading Wax Works! (Or wasn’t it Brading Experience in its latter years?). I re-visited it a couple of years before it closed, with my son, and had to check out some of the rooms first, to make sure they wouldn’t freak him out. The labels in the room with the mannekin wearing a chastity belt looked like they were written in the the 1960s (they… Read more »
Vote Up00Vote Down
tiki

I’m not surprised, the place never looked open. Maybe they should have spruced the entrance up a bit and did something to attract passing traffic. Like I said, I have often driven past and it has always looked closed for business.

Vote Up00Vote Down
wendy hayden
Me and my kid’s loved the rarebreeds and the bird park. We spent whole days there and have brilliant memories. I also remember Clamerkins farm park over Porchfield way, another great place for kids. Haseley manor, arreton manor and gatcombe with walks to the lake and a costume display. A brilliant extreme play centre at the top of newport that catered for children 2-90 ! One of… Read more »
Vote Up00Vote Down
Lady at the back
Ooh yes,Arreton Manor and Haseley Manor – we used to enjoy visits to those .My daughter kept some piece of pottery she had made at Haseley for years; I can’t actually recall what it was – a Picasso-type animal, I believe, but she gave it pride of place. And Brading waxworks; she preferred it to Madame Tussauds, because it had animals…mind you, she was only about six… Read more »
Vote Up00Vote Down
Wendy Varley

I think the BHS escalator still IS the only escalator on the Isle of Wight, isn’t it? Is that right? Though Sainsbury’s have now added the thrill ride that is the travelator at their Newport store!

Thanks for sharing your memories!

BHS, Cineworld and Sports Direct have escalators.. Plus the flat ones at Co-op in Ryde and Sainsbury’s in Newport.

Oh yes, of course, Cineworld and Sports Direct! Thanks, Vix and Simon. The island’s practically awash with escalators!

I can feel an exciting weekend coming on!

Retired Hack says he can remember (as a child) when the only traffic lights on the Isle of Wight were at Yarmouth bridge (must have been late 1950s/early 1960s)….those were the days, eh…Coppins Bridge will have been but a twinkle in Steve Beynon’s eye…

Vote Up00Vote Down
BRIAN
The problem with all the attractions mentioned is their type of entertainment/historic value. The tank museum: Probably of little interest to anyone not born during or immediately after the last war. I visited the museum and found it most interesting and enjoyable. But on the other hand, I am over 60. The parents of children now were born in the 1970’s and 80’s. Events of 1945 are… Read more »
Vote Up0-1Vote Down
Vix

That’s not representative of many children today. My boys love the birds and artefacts at Calbourne Mill, and Blackgang is an absolute joy for them.

Have to agree with you there, Vix. My son and my young relatives absolutely love Blackgang Chine. The appeal of running about en masse with toy guns in the cowboy town never wanes!