15 months of roadworks at St Mary’s roundabout are about to begin. Details of what’ll be in place and what to expected revealed. 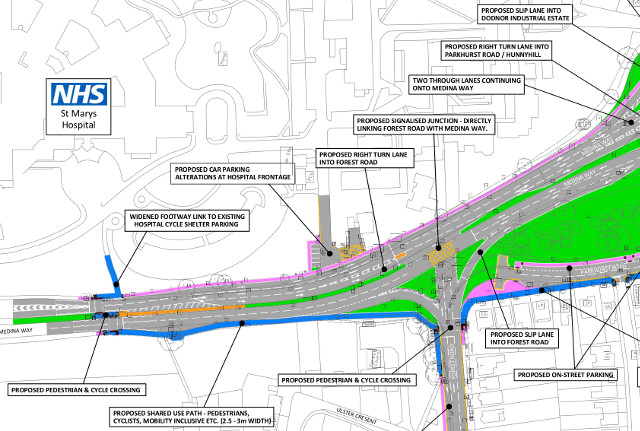 Work on a major scheme to reduce traffic congestion and improve access for pedestrians and cyclists at one of the Island’s busiest junctions is to begin at the end of September.

Construction of the Isle of Wight Council scheme will transform the approaches to — and access across — St Mary’s roundabout in Newport.

Work starts 30 September
The project is the largest of its kind on the Island for many years, so the council is keen to give advance warning to motorists ahead of construction which is planned to begin on 30 September and be completed in December 2020.

Construction will pause over the Christmas and New Year holiday and during the Isle of Wight Festival period next June. Work will take place during the day and at night when appropriate.

To support local businesses, the council will be offering free, weekend afternoon parking in its Newport town centre car parks in the run up to Christmas.

It is the largest of a package of schemes designed to improve traffic flows through Newport, which have been financed largely by a government grant of £9.6 million, supplementing development contributions.

Other schemes being planned
Other schemes within the overall Newport Strategic Junction Improvements, such as the new arrangements at St George’s Way and Shide, have already been implemented, while others which will follow in the next three to five years — including the link between Coppins Bridge and the Matalan roundabout, which has also been given the go ahead — are still being planned.

Collectively these schemes, once completed, will transform the flow of traffic in and around Newport and accommodate the projected volumes of traffic expected in the emerging local plan.

Benefits of the scheme
The St Mary’s junction scheme includes benefits for vehicular, pedestrian, cyclist and local bus traffic with new widened shared-use cycle/pedestrian facilities and the removal of the current roundabout which will be replaced with two linked traffic light-controlled junctions to improve traffic flow.

There will also be an additional lane introduced at the B&Q roundabout to ease congestion on the approach to and from the new junction.

It will also include widening of the northbound carriageway of Medina Way to accommodate two right-hand turn lanes to facilitate traffic turning onto the industrial estate. The road from Cowes into Newport will also be widened on the southbound side to ease congestion on the approach to the junction.

Combining with utility works
Works will also be implemented on Forest Road at the same time as SSE carry out planned high voltage cable upgrade works to help minimise future disruption for residents and the travelling public on this route.

The council is however advising road users that the work will cause disruption during some phases, particularly until motorists become accustomed to temporary traffic arrangements during construction.

Feedback from public
Plans for the scheme have evolved over time with a significant number of changes being incorporated following feedback from the public consultation.

The signal-controlled junction is one such major change together with improvements to the B&Q roundabout and enhanced cycle and pedestrian links.

Further details of both schemes will be announced in due course.

Ward: A complex scheme to put together
Councillor Ian Ward, Cabinet member responsible for infrastructure and transport, said he was pleased the authority had secured government funding over and above the millions already secured to improve the network through the Highways Improvement Programme.

“The St Mary’s junction scheme, the largest of the package of schemes under the Newport Strategic Junction Improvements, has been a complex scheme to put together as we have had to acquire some land in order to include features such as the shared use footway.

“We have also made significant changes to the scheme in response to suggestions made during the public consultation.

“We have been assured that a traffic-light controlled junction will have more capacity for vehicle movements than a roundabout.

“But we are now set to begin this major scheme to improve traffic flows both now and in the future at what is a notoriously busy junction. The project will also leave us better placed to unlock other regeneration schemes in this area.

“I am particularly pleased that the work will also bring about enhanced features not just for cars but also for local bus traffic, pedestrians and cyclists.”

“During construction there will be various temporary traffic arrangements so work can be undertaken as quickly and safely as possible.

“Traffic lanes will be reduced temporarily, and contraflows introduced as well as short-term speed reductions. Road users will inevitably experience delays and should allow additional time for their journeys.”

New double yellow lines
Recognising the impact on adjacent areas, double yellow lines will also be introduced to Manners View and Riverway for at least the duration of the scheme, to enable better access to the industrial estate.

Residents living near the works and stakeholders have received letters about the scheme and its implications and will continue to receive updates at each of the key phases during the works.

A webpage on the homepage of www.islandroads.com has also been created to give regular scheme updates and real-time information for motorists. Information will also be relayed via on-site information boards and via Twitter.

The work to improve the junction will be carried out by Island Roads.

The above is shared by the Isle of Wight council, in their own words. Ed

newest oldest most voted
Colin
This is the most unnecessary, illogical and unwanted scheme for many a year and this council have come up with many, so the bar is set quite high. Cllr Ward talks utter tosh and I also hold the remaining tory councillors responsible for not properly reading the overall plan and questioning the so many obvious flaws. What a bunch of dummies led by a leader who hasn’t… Read more »
Vote Up47-1Vote Down
Spartacus

Can’t agree more. Coppins bridge is the obvious problem why can’t these idiot councillors see this, they should not be in office they are a disgrace.

So the Council is preparing to withdraw bus and train travel benefits from disabled people while at the same time offering free parking to able bodied car users.

I am sure there is logic to this somewhere but I’m afraid I cannot see it.

Oh great. How am I meant to know when it’s Linda’s 40th birthday now?

A good day to try to bury bad news, under brexit’s parliamentary pyrotechnics?

Our national and local politicians acknowledged our environmental emergency; choosing to use that magic money for this mad much critisised purpose instead of using it to get on with at least one of the many more appropriate genuinely beneficial responses to our predicament is a disgraceful further demonstration of our dire situation.

Also, what of the employees and customers of the businesses on Riverway and Dodnor Industrial Estates? Where will they park, once these extra double yellow lines are added? Parking is already a nightmare and totally inadequate. So, the council are now going to make that worse too.

This going to be horrendous for those of us living in Cowes and everybody who needs to get to/from for work, RJ, etc. Nobody I have spoken to can see the earthly reason for it, either – the general consensus is that Coppins Bridge should be sorted first…

Spot on, are you listening Councillors, I doubt it you never do, you couldn’t make it up if you tried.

Where is the Councillor responsible for this area? Is it Councillor Garrett? What has he done/is doing about all of this? Anyone seen him or spoken to him?

Vote Up14-5Vote Down
royscott
Yes it is Cllr Garratt, he has done loads to try and bring this ridiculous plan to the attention of the public who are going to face months of delays, disruption and queuing traffic pumping out pollution to the homes on Forest Road and Horsebridge Hill. The problem is Cllrs Dave Stewart and Ian Ward, they are frankly mad, and do not listen to any rational argument… Read more »
Vote Up31-1Vote Down
royscott

A free saver card for the floating bridge – woohoooooooo ……. ought to be making it a free crossing too…………….

Can anyone explain to me why this work is happening at all ?

Vote Up60Vote Down
johnr
Apparently the Public Consultation on this was a ‘Non Event’ which then prompted Cllr Garrett to do another at which the majority voted against it, the decision was made by Councillors last September. As far as I am aware none of the local haulage / delivery companies were approached for views or comments although I am waiting confirmation on this, and it is probably far too late… Read more »
Vote Up5-2Vote Down