40 jobs to go as Planet Ice set to close

The staff and skating coaches will all lose their jobs unless someone can be found to take over the ice rink before the end of March. 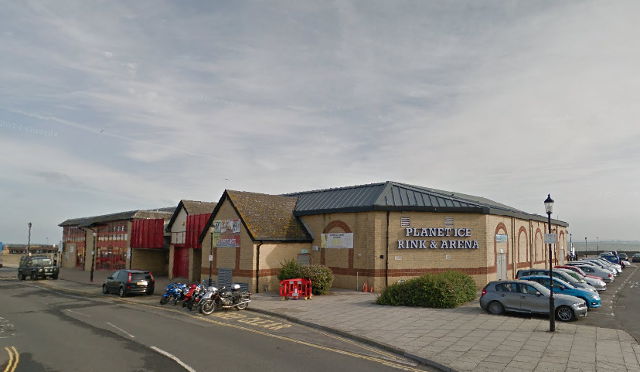 Around 40 jobs at the Isle of Wight’s only ice skating rink will go after it was announced that Planet Ice (Ryde Arena) will close at the end of March.

The CP are reporting that owner of the ice rink, Mike Petrouis, visited the Island today to break the news to staff.

34 members of staff, as well as skating coaches, will now have to find other work, some after having worked there for many years.

New leaseholder sought
Manager, Lorna Cotton, told the CP Mr Petrouis had said he’d listen to anyone who wanted to take it over, apparently adding he’d “sell them the fixtures and fittings, and the rest of the lease, for £5 if it would keep the rink open”.

Opened in 1991, the ice rink is also home to figure skating, ice hockey teams and has hosted a number of music events over the years.

Our thoughts are with all those affected.

Hope these jobs can be saved.

There has got to be somebody out there to come in and take this on,so do not give up, hence the question mark, first comment.

Yet another supermarket? Plenty of parking there already.

After the hysteria dies down ….. it’s pure economics. They obviously aren’t getting the people through the doors. I wonder how many of those lamenting its demise have ever been in there.

I see no hysteria, just regret and human compassion.

Vote Up00Vote Down
BRIAN
I think tiki has a point. The Snooty Fox/Dark Horse in Brading along with the wax works and, I think, secret garden have all failed. The Roadside Inn in Nettlestone has failed for lack of trade and may become a Tesco Express. The Porchfield is on the market having closed. In the main it’s all down to lack of trade especially for pubs in the winter relying… Read more »
Vote Up00Vote Down
stephen

So these good folk will lose their jobs through fault of themselves.

In time they risk being labelled as ‘scroungers’ etc if they do not fall into new jobs within a few weeks and try to live on the Job Seekers Allowance.

Perhaps the skating coaches could work for the Council if they can show skills in skating on thin ice.

correction – should be no fault of of themselves.

Vote Up00Vote Down
BRIAN
One could be forgiven for thinking that the Island is fast becoming like Blackpool or Rhyl. We have Sandown looking shabby, Harcourt Sands still derelict for more than a decade. Hoteliers putting their premises on the market with no takers. Toilets closed, tourist information reduced, ferry fares. I can see no end in sight. If I was in business relying on the tourist trade, I would be… Read more »
Vote Up00Vote Down
Lord Bermondsey

On The Wight quote…”Our thoughts are with all those affected”.

Quite right, and not the first time recently you’ve given these kind words to those that will be affected.

How come then, whenever jobs are being cut at the council, we don’t see this message from you?

What have they done to warrant this omission?

yes Tiki it is the economy, only self inflicted by the government in Westminster as they seem to act driven by there Tory dogma and not by simple economics….

here its explained 160 years ago

Tendency of the rate of profit to fall

Vote Up00Vote Down
BRIAN
Quite interesting article. I have my thoughts on why island tourist businesses are not doing well. All tourist businesses have multiple outside factors beyond their control which hamper their ability to prosper. Take as an example a medium-sized hotel. First it must attract tourists but it is hampered by the ferry companies who dictate how much those tourists will pay to arrive. Many will refuse to pay… Read more »
Vote Up00Vote Down
mat

This is where Government Funding supporting the economy comes in, not coming out of tne Council.

Vote Up00Vote Down
Mark Francis
You have hit the nail on the head ewald! I have never quite understood the principle behind this, which I have understood was due to the increased organic composition of capital – that is to say that through mechanisation the element of pricing due to labour is reduced & it is axiomatic through the Ricardo Labour Theory of Value that this would reduce profits. But why? Is… Read more »
Vote Up00Vote Down
ewald

economy is not a science but it can be a philosophy

Although profits might eventually reduce in a free market due to competition, such free markets are few and far between as corporations grow and create protective cartels, monopolies and duopolies.

Thus the number of private pockets into which those profits disappear diminishes year-on-year. Thus the ricjh get richer, the poor get poorer and the GINI index widens.

ewald, if the best you’ve got to offer if Marxist theory, we are in trouble. It doesn’t explain why somewhere like Norfolk or parts of the South coast has done relatively well whilst too much of the Wight has stagnated. Skaters of the world unite!

Perhaps it’s because people travelling to Norfolk and the South Coast don’t have to encounter Red Funnel or Wightlink.

ones you forget the brainwash
all economics at the time, smith even earlier explained it similarly, but I think KM is best to understand, only he was misused by Engels & Labour and communism later….

I think it is also Adam Smith Theory too.