Alternative acts raise over £200 for Isle of Wight Youth Trust

Devil’s Isle Events are not for the faint-hearted, but all took part must certainly be kind-hearted as over £200 was raised for the Isle of Wight Youth Trust. 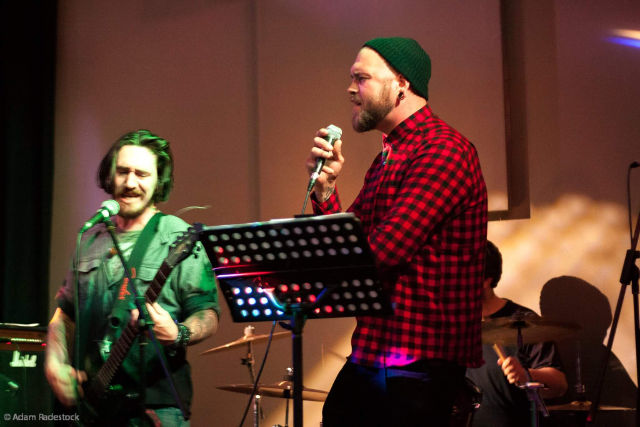 Devil’s Isle Events united the creme de la creme of the Island’s alternative scene at Coburgs on Friday last week in aid of the Youth Trust.

It was a night of consummate entertainment with the best of the Island’s burlesque scene; the sophisticated Isabelle L’Amour, gothic sex kitten, Ravenna Grimm and the stunningly curvaceous Carmen Angelique, performing with the house band throughout the night.

Stimulating the audience
Seeing Burlesque performed to a live band, rather than the standard backing track was particularly special, making their performances more atmospheric as it was both visually and aurally stimulating for the audience.

Intelligent and perceptive performance
There was also music from Will Camm who sang haunting versions of Placebo’s ‘Pure Morning’, Blue Oyster Cult’s ‘Don’t Fear the Reaper’ and Christina Aguilera’s ‘Genie in a Bottle’.

Camm is known for belting out powerfully loud and epic vocals, with comedic moments. However tonight he displayed a different side, showing versatility in his talent. He performed with guitar and loop pedal, layering up his tracks live and his subtly toned down interpretations were intelligent and perceptive.

He walked across broken glass, twisting and leaping on it, with the microphone on the floor so the horrendous crunching was audible. And he threw darts at the back of a very trusting lady wearing a dartboard on her back – whilst he was blindfolded!

Painless’ act was performed with hilarity, wit and incredible professionalism.

The brainchild
Exceptional is one of the many superlatives that can be used to describe Seb Sebotage Clark. He’s a brain child of Devil’s Isle Events along with Harry Richmond and Emma Bowley. He opened his set with a beautiful rendition of U2’s ‘With or Without You’ which had everyone singing along. Not many people can get away with playing U2, but Sebotage really can.

His guitar isn’t an instrument he plays, it’s like an extension of his body – a part of him.

His mash up of The Fresh Prince of Bel Air’s theme tune with Bill Withers’ ‘Aint no Sunshine’ has to be seen to be believed! He competently switched between Motown soul and passion to Will Smith humour with ease. Random! But it worked!

There was also a punked up, hilarious version of Take That’s ‘Back for Good’ with lyric change – he did ‘expletive’ mean it! Very funny!

Catch him while you can
Clark is also a songwriter and has the confidence to include his own songs in his set. ‘(I’ll be) fine here’ is intensely personal and heartfelt. Hopefully one day he’ll produce an EP of his original work.

It’s a joy to watch Clark perform and his career is constantly on the up since his incarnation as Sebotage a year ago. He will undoubtedly play bigger venues in the coming years, so I urge you to catch him at intimate venues like Coburgs whilst you can.

Not just music and burlesque
The night also featured stand up comedy from Bobbin Dixon and magic and comedy from HuxleyMagic. Devil’s Isle Events have now established themselves on the Island’s alternative scene as a great night out, with this, their second successful event. This fantastic evening raised £211.55 for The Island Youth Trust.

Their next event is in February, check the Devil’s Isle Events Facebook page for more details.