The mood of the meeting was anger and disbelief, with huge cheers and rounds of applause for those who stood up to speak and question the decision by Isle of Wight council officers to focus on the future of one school only. 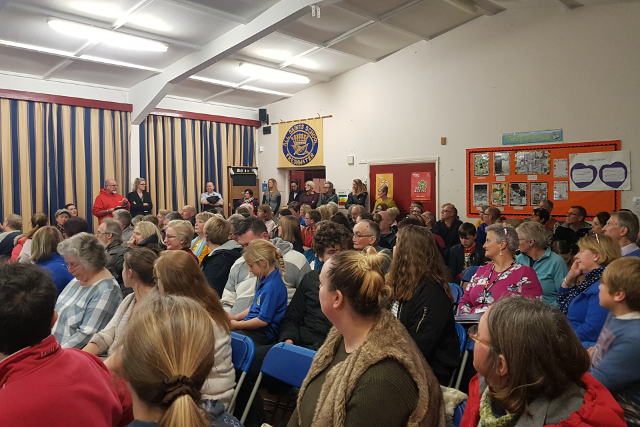 Freshwater parish councillor, Vix Lowthion, shares this latest report on the campaign to save All Saints’ Primary School from closure. Ed

Over 100 villagers attended a vocal and heated meeting at All Saints Primary School in the West Wight last night (Wednesday).

Faced with IW Council proposals to close the only school in the large village of Freshwater, residents came to hear what council officers from Hampshire had to say, including Martin Goff (Head of Information, Transport and Admissions), Richard Vaughan (Deputy Head of Strategic development) and Natalie Smith (School Improvement Manager). Anger and disbelief
After a short presentation, based on demographic data and OFSTED reports which were queried from the floor, there followed 90 minutes of representations and questions made by parents, governors, councillors, unions, teachers, villagers and church goers.

The mood of the meeting was anger and disbelief, with huge cheers and rounds of applause for those who stood up to speak and question the decision by officers to focus on the future of one school, during a consultation on school places for the whole West Wight.

Parent: ‘Cllr Brading refused to walk with me’
Parent of four, Rachel Dunleavey, spoke out and said that the closure of the school would force all families in Freshwater to walk or drive to any school with free places, adding to traffic congestion in surrounding roads and villages and with concerns for the safety of young children.

“I asked Cllr Paul Brading to walk with me, my buggy and my young children on the proposed school run to Totland where there are no pavements and we would be forced to walk on the road into oncoming traffic. He refused.”

Other comments from the floor included strongly worded support for the school and its teachers, how pupils are showing further improvement, and that recent DfE data on performance puts All Saints pupils 2nd out of the five West Wight schools and 9th in the whole of the Isle of Wight. Wyre-Nock: “We’re an improving school”
Carly Wyre-Nock listed a great number of the concerns of the parent body (59 minutes into the video below) and demanded that the council re-look at the premise of their recommendations.

“This is a designated rural school and that has implications… We are not a failing school, we are an improving school! We don’t think it is fair that one person is making this decision, and we feel we are being picked on as a school. This process is not fair and it hasn’t been done fairly.”

“This site is fabulous – it is close to all the public amenities and where children and families live, 95% of whom walk, scoot and cycle to school.” The next meeting with officers will be at St Saviour’s School in Totland (1st April, 6-8pm) and the consultation proceeds until 15th April.

Cabinet meeting
Parents and residents will be protesting outside the meeting of the IW Council Full Cabinet meeting in Freshwater at 4pm today (Thursday), with coverage on BBC Radio Solent and South Today on bulletins throughout the day.

newest oldest most voted
Colin
Good to see those affected standing up against this ridiculous council proposal. Trouble is, Cllr. Whitehouse seems to have given the game away with his pronouncements before the consultation even began. And he lives where? And the councillor with the finance portfolio represents and lives where? Whilst appreciating that running an undersubscribed school is not the most efficient way of making the best use of limited funds,… Read more »
Vote Up44-1Vote Down