Another weekend, another regatta for Ryde Rowing Club

There were some great performances from Ryde Rowing Club crews at the Itchen Imperial Rowing Club’s Annual Regatta on Saturday. 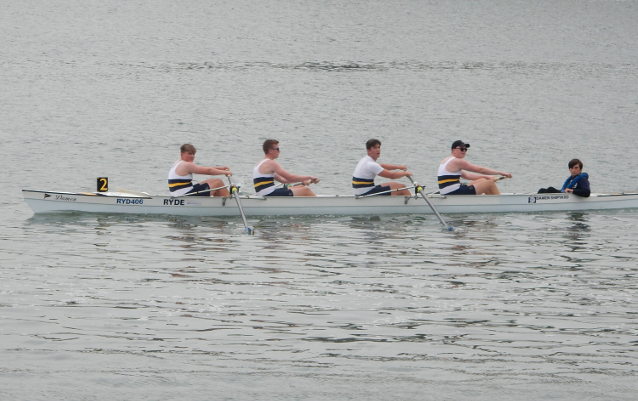 The highlight of the day for Ryde came from their J16 Boy’s Four of Josh Lee, Tom Starkey, Ben Sanderson and Austin Smith coxed by Dan Sanderson who won the club’s third J16 Fours event of the season beating the host Club Itchen in the Final.

A mixed second crew of Paddy Kearney, Freya Drage, Grace Bolland and Harry Jones with Dan in the coxswains seat once again were beaten in the semi-final where they finished second against all boys opposition.

Another impressive performance
The Boy’s J16 four – with one change – Tye Cameron replacing Josh Lee – with coach Graham Reeve coxing – also produced another impressive performance in the Men’s Novice Fours event – where they won their semi-final easily before facing the host club once again in the final where they lost out by the narrowest of margins.

A new pairing of Tye Cameron – who is a J16 – and Joel Smith competed in the Men’s Coastal Junior Pairs event where they finished second in their semi-final to missing out on a place in the final. The Club had a double scull in both the Men’s and the Ladies event – although they were all only J16. The Men’s double of Tom Starkey and Josh Lee and the Ladies double of Grace Bolland and Freya Drage both raced really well against adult competition, although both lost out in their respective semi-finals.

In the J16 Boy’s Single Sculls, Ben Sanderson finished in second place in his semi-final to miss out on a place in the final, but Austin Smith won his semi-final finishing third in the Final.