The Isle of Wight is on the up and punching above its weight winning eight awards and two commendations at the Beautiful South Awards. Details within 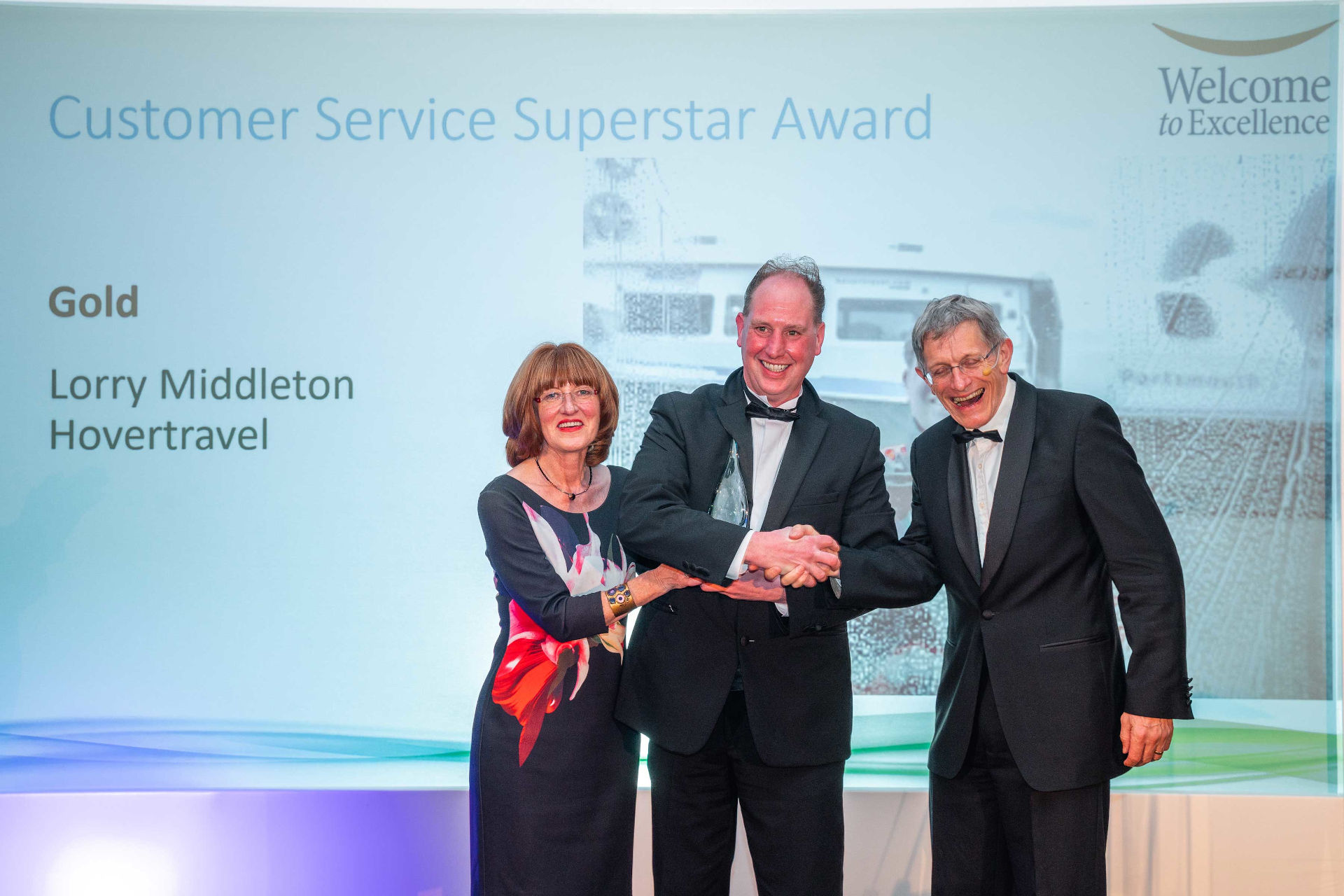 Isle of Wight tourism businesses have been recognised for their excellence at the south’s tourism Oscars.

Working with Tourism South East, the Beautiful South Awards recognise the very top in the tourism industry, working with experts in their fields judging the best of the best.

Customer Service superstar
Lorry Middleton (pictured above) from Hovertravel picked up the gold award for Customer Service, charming the audience in the process.

Lorry was humble in accepting his award:

“I’m just a small cog who’s got an amazing award for customer service, but it’s thanks to the team and everyone’s hard work at Hovertravel that’s allowed me to have this award.”

The award means that Lorry will automatically be put forward for the national Tourism Superstar Awards run by the Mirror and Visit England, won in 2018 by Cowes man Jim O’Reilly, from Red Funnel.

“It means a lot to me because I’ve never won an Oscar and this feels like winning an Oscar.”

Hovertravel was also commended for their work in Access and Inclusivity.

Second gold for Monkey Haven
The gold award for the Small Visitor Attraction of the Year went to the Isle of Wight’s Monkey Haven, an award they previously won in 2016. They were also commended in the Ethical, Responsible and Sustainable Tourism category.

Kelly Wickes, a manager at Monkey Haven based near Newport, spoke of the team effort at the charity and attraction:

“I can’t put it onto words what this means to us as a little charity, and it’s incredible and a massive testament to all of my team that have just worked tirelessly to make the Monkey Haven what it is and we are absolutely thrilled.

“I never thought in a million years we would be getting gold again at the Beautiful South Awards and I’m lost for words.”

Second gold for Eco Lodge
Tom’s Eco Lodge, near Yarmouth on the Isle of Wight, took home the gold award for the second year running in the Glamping and Alternative Camping awards.

Tom Turney of Tom’s Eco Lodge thanked his team for their work:

“It’s amazing. To win it for a second year in a row just shows how much of an amazing team we have at the farm.

“Chloe, Joe and the whole team are incredible and this just shows how we won and why we won it, it’s through their amazing efforts really.”

Turney: “The Island’s on the up”
~Tom also had this message for the Island:

“We are so happy to have achieved such an accomplishment, we’ve only been doing weddings for less than two years now and we really didn’t expect it, we are so so happy!

“It’s amazing! It’s great publicity not only for us, but for the Isle of Wight. The majority of our weddings actually come from the mainland, so it’s nice to be able to bring people over, so they can enjoy it not only for their special day but for their holidays and all their families and friends as well.”

Bronze for Mill House
Away Resorts Whitecliff Bay Holiday Park at Bembridge, collected a silver medal in the Camping and Caravan Park category.

The Mill House in Brighstone on the Isle of Wight took home the bronze medal in the self catering accommodation category.

Josie Gavoyannis from The Mill House had entered the awards for the first time:

“It’s a wonderful honour to be here and I feel that the awards really recognises the passion that we put in to providing the best guest experience we possibly can. It’s just wonderful to be part of peoples holiday experiences.”

Bronze for Glampers
In just their third year, Sibbecks Farm Glamping at Whitwell on the Isle of Wight took home the bronze award for Glamping and Accommodation.

Vicki Sitch is from Sibbecks Farm:

“It’s so exciting, this is only our third year of trading, we’re not from this sector so it’s really exciting to be rewarded in this way.”

Heather: “We punch above our weight”
NFU Mutual were sponsors of the evening. Isle of Wight  NFU Mutual Senior Agent John Heather attended the awards and was full of praise for the Island winners:

“I think it just emphasises just how important the hospitality industry is on the Isle of Wight and the level that the businesses achieve, the high standards that we achieve here on the Island, I think it just shows how we punch above our weight, with such a small island winning eight awards tonight.”

Myles: It’s amazing
Will Myles, MD at Visit Isle of Wight collected the bronze award on behalf on Robin Hill for Electric Woods for Tourism Event/Festival of the Year.

Will congratulated all of the Island’s winners:

“Well done to all of our award winners and all of the people who have actually put forward their companies, organisations and businesses for these awards.

The event was hosted by travel broadcaster and travel editor of the Independent newspaper Simon Calder at the Grand Hotel in Brighton.

News shared by Simon on behalf of Visit Isle of Wight. Ed

Love the Bronze for Glampers photo ;-)