Carlauren Group explain the situation with development at the former Ocean Hotel in Sandown. However their subsequent post to Facebook puts this into question. 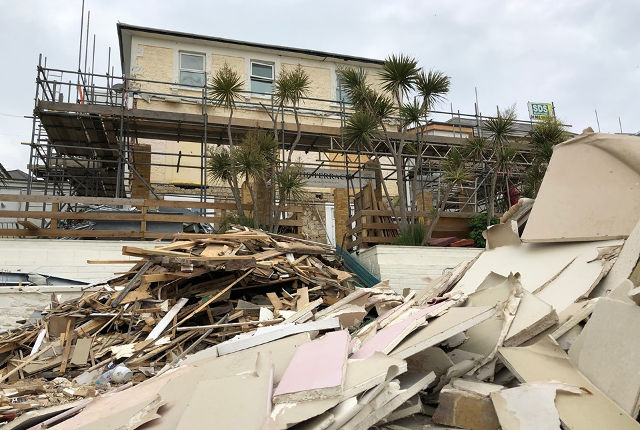 Carlauren‘s plans to introduce an Ibiza-style beach club and accommodation on Sandown’s seafront have been put ‘on hold’ after structural issues were discovered on the site of the former Ocean Hotel.

“Not cancelled”
A spokesperson for the company told OnTheWight,

“Origin Beach Club and Accommodation is not cancelled, only postponed. It’s likely that this will only be temporary and we look to open as soon as these issues have been overcome.”

News of the delays reached OnTheWight thanks to a heads-up from admins of Facebook Groups, Our Sandown and Sandown Hub.

“Once groundworks were started we were made aware of some structural issues.

“We are still awaiting the full report from the structural engineers.”

Length of delay unknown
When asked when work would resume on the site, they replied,

“As soon as we receive the above and understand the necessary steps that need to be taken.”

As to whether the development will be completed and open before the high season, the spokesperson told OnTheWight,

“We can not comment on this until we receive the above.”

Carlauren: Cancellation refers to ‘launch event’
OnTheWight wrote to Carlauren asking them to explain how this message squares with the statement given to us earlier about the project not being cancelled.

A few hours later they responded:

“The cancellation refers to the opening party which we previously had advertised for the 1st of June. We did have a lot of positive feedback with many people looking to make bookings so it was important we made its cancellation clear so guests didn’t make plans around this date only to be let down. The development however is only postponed until we gather further information on the structural Issues.”

The Facebook post that Carlauren refer to makes absolutely no reference whatsoever to a launch event, nor did it when the same text was sent to an OnTheWight reader earlier today when they enquired about the Beach Club.