Planning officers sounded a note of caution, but a member of the committee said he didn’t understand why the council were not biting the hand of the applicant off, as he was offering to save the council money. 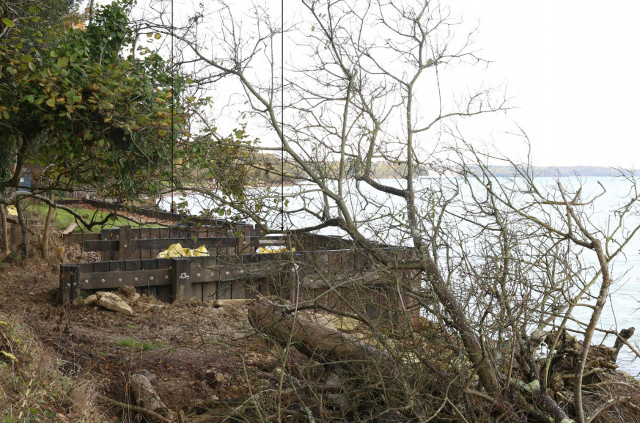 A sea wall built at Ryde has been approved by Isle of Wight Councillors — despite concerns it may set a precedent.

James Flynn built the wooden structure at the end of his property on Church Road, Binstead three years ago, to protect his and neighbouring gardens.

Only way to reach the beach
The application was supported by Ryde Town Cllr Diana Conyers, who said the structure prevented steps leading down to the beach from being washed away.

“This is the only way people can access the beach.”

“I don’t understand why the council are not biting his hand off — he is offering to pay for all the repairs himself and save the council money.”

Caution from officers
Members approved the application by four votes to three, despite planning officers sounding a note of caution. They said granting approval would seriously impact their ability to turn down similar changes to the seafront, warning:

“It will result in other properties making significant changes that we cannot control.”

newest oldest most voted
realitycheck
Who are the muppets that voted against this..??? Are they completely devoid of any common-sense…? Are these the same people that declined a Country Store developing with no harm to any local area and that would increase local business and then approved two ridiculous property developments that have zero infrastructure in place (or ever likely to have)…? (Whippingham and Northwood) And further who complained about securing a… Read more »
Vote Up17-5Vote Down
boatman

Reference ‘Muppets’. These are the same Muppets that Islanders vote in year after year – they invariably have a blue tinge to their attire and complexion.

The correct refusal of the out of town shopping centre, well country store and furniture shop as proposed was clearly ill conceived retail warehouse’s are correctly located in the Industrial/ retail park area of Newport in fact the furniture shop is there now, just looking for a low cost unit ?.