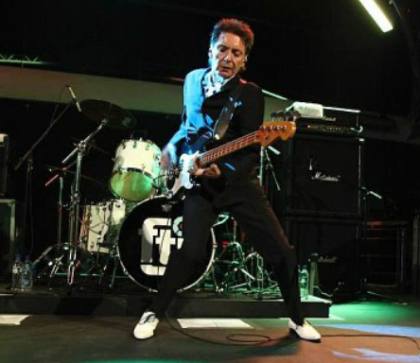 With Bruce Foxton playing with his band, From The Jam, on the Isle of Wight on Sunday at Isle of Arts Festival, we had the opportunity to interview him this morning.

A musician with such a distinguished history needs to be interviewed by someone with a high degree of knowledge and we could think of no-one better than Steve Robson of Visual Impact, a life-long Jam fan.

Life-long Jam fan
Steve had several years worth of passionate Jam memories already and backed these up with additional background research, which all led to a quality interview that took Bruce through his 36 year career, since the release of the first Jam single right up to Sunday’s gig.

The twenty minutes fly by, so here’s a number of quick pointers to what was discussed, complete with a few videos of tracks referred to.

What comes up in the interview

Have a listen to the interview

See him this Sunday
Bruce will be playing with From The Jam on Sunday in Ventnor at the marquee at Isle of Arts.

We understand that there are still some tickets are still available, so book yours now to avoid disappointment.