A commercial tug at Fawley oil terminal capsized last night, now sunk, and its crew were rescued with many craft helping out. 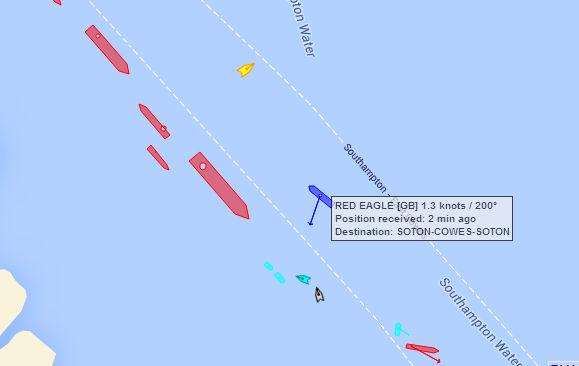 Last night was a blustery, cold night and one which saw a Red Funnel car ferry, catamaran and many RNLI craft assisting in the rescue of crew from an over-turned commercial tug.

One of the tug’s crew members was in the water for over an hour before they were pulled out of the water. The tug sunk.

Fawley
If you followed our live Twitter feed, you’ll know it occurred near the Fawley marine terminal, where oil tankers dock, on the car ferry route to/from Southampton.

The MCA issued the following details:

At 7.15pm the Coastguard received a Mayday call from a sailing vessel reporting that a tug had capsized at the Fawley marine terminal. One person was seen the water and was recovered to the shore and is being treated for hypothermia.

Many other services and craft were involved. The Coastguard coordinated a search of the area for a second crew member involving RNLI lifeboats from Lymington, Calshott and Cowes and Coastguard Rescue Teams from Southampton and Lymington and Southampton Port patrol vessel.

Second crew member
A second crew member was located at 8.29pm and recovered from the water to the lifeboat and has been transferred to hospital. All crew have now been accounted for and the search has finished.

The vessel which is a commercial tug, remains capsized and sunk and weather conditions on scene tonight are strong winds and poor visibility. There is no reported pollution on scene tonight. RNLI update
Cowes RNLI lifeboat was among the vessels involved in a major emergency in Southampton Water this evening when a tug suddenly capsized, resulting in a subsequent dramatic life or death rescue of one of the two men aboard.

The tug, the Asterix, attached to Esso Oil Refinery at Fawley, capsized and subsequently began to sink just off the refinery’s pontoon.

One crew member of the Asterix managed to jump clear and swim to safety, leaving one man still unaccounted for.

The RNLI lifeboats from Cowes, Lymington and Calshot undertook a co-ordinated search of the windswept waters, using their powerful searchlights. One lifeboat crew banged on the hull of the Asterix, still visible at this stage above the water, but received no response.

A Fawley emergency employee who was watching the capsized vessel from the pontoon then just glimpsed an arm in a small pocket of air behind a window. Without hesitation the employee leapt into the water, smashed the window and extracted the trapped crew member.

Both were evacuated from the water just before the tug sank. Both the rescuer and rescued, plus the man who had swum clear earlier, received immediate emergency care from the attending paramedics and RNLI crew members training in casualty care. All three men were then taken by ambulance to hospital.

Cowes lifeboat had launched at 8.30 pm. Among the four crew was Dr Will King who helped provide medical care to two of the casualties. Joining the three lifeboats in the search was another Fawley tug, Ibex, together with Red Funnel’s car ferry Red Eagle and catamaran Red Jet 4.

newest oldest most voted
Oldie
Thank goodness it all ended well. It’s a sobering thought though that the new Wightlink car ferry lounges might be beautiful with live music and Gregs etc but there are are no life boats to be seen anymore and no life belts under the attractive flimsy couches and chairs like on the catamaran. I feel as safe as I do on a Greek ferry when I cross.
Vote Up00Vote Down
Michael Douse

What a an act of heroism to dive into a storm tossed sea in the dark!
How does one nominate a person for a Royal Life Saving Award?