The museum is playing host to the summer visitor, a replica juvenile T. rex skeleton, on loan from local fossil collector, Barry Gibson. 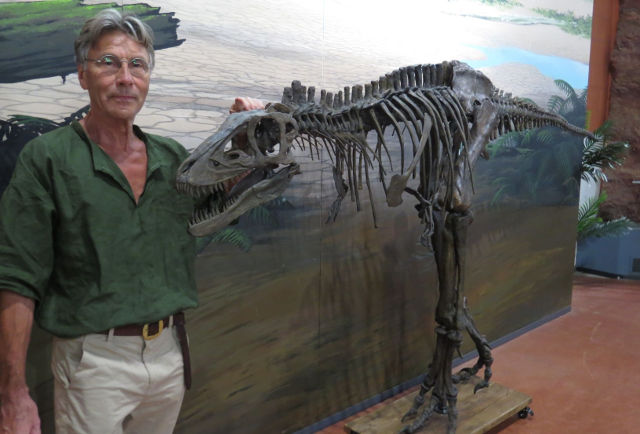 The museum is playing host to the summer visitor, a replica juvenile T. rex skeleton, on loan from local fossil collector, Barry Gibson.

The model reveals the powerful legs that carried these ferocious predators 70 million years ago.

“We are delighted to welcome this model to the museum – T. rex skeletons are extremely rare but this model shows just how large the younger dinosaur would have been – almost the length of a VW Beetle car.

“T. rex fossils are not found on the Isle of Wight as the rocks are too old. When T. rex was alive, the area that is now southern England was under a deep sea. However, the museum is home to its ancestor, Eotryannus, which was discovered on the Island 20 years ago.”

“The baby T. rex arrived in separate pieces that were numbered. I repainted each piece before it was ready to be assembled at Dinosaur Isle Museum. I have been very pleased with the way it came together and the mount looks great.”

Hobart: Real sense as to scale of these dinosaurs
Cabinet member for environment, culture and heritage, Councillor John Hobart, said:

“This exhibit is well worth a visit as by simply standing alongside the model, you get a real sense as to the scale of these dinosaurs.

“There’s also a whole host of other fascinating dinosaur finds on display, many of which originated on our very own coastline, and the Dinosaur Isle team are also available to take a look at any finds visitors or locals have found themselves.”

The T-rex
Tyrannosaurus rex was discovered 110 years ago by renowned palaeontologist Barnum Brown, near Hell Creek in Montana. Growing up to 14 metres in length and weighing over 5,000 kilos, it would have been the top predator of its day, towards the end of the Cretaceous period, in what is now modern-day North America.

At the time a great seaway ran through what is now the American Mid-West, and the coastal areas around the seaway were home to great numbers of dinosaur, including the iconic Triceratops and Tyrannosaurus.

The model will be on display at Dinosaur Isle Museum until Autumn 2019.

For further information on Dinosaur Isle, please visit their Website.