Have Cheetah Marine been practising what they’ve been preaching? 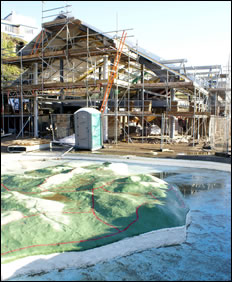 We all remember the phrase ‘Local Jobs For Local People’ that was used by local boatbuilder, Cheetah Marine, when they fought to gain permission for their seafront development.

They (and their supporters) mentioned many times how the company provided jobs for ‘local’ people including in the interview that Simon did when he went to see them back in March 2007.

15.05 mins into part two of the recording (we’ve separated it out below for ease), you’ll hear Sean Strevens say

“If we were in it for the money, we’d be building boats in Poland at half the labour rate, it’s a simple as that. We’re in it because we’ve grown up in Ventnor, we employ local people, a lot of local people … ummm … rely on us and we want to keep that going.”

The film is a very touching story about Hubert Litwa, a Polish worker who came to the UK to take advantage of the better job opportunities and make enough money to build a home for his family and pay for cancer treatment for his wife.

Now, don’t get us wrong, we have no problem whatsoever with Eastern European workers coming to the UK, but it does stick in the throat a little when someone has used the ‘local jobs for local people’ argument, yet does the polar opposite.

Yes, of course, we realise that the remainder of the employees are local people and we give credit to Cheetah Marine for that, but really, was it reasonable for them to use this argument?

“The few Polish guys we’ve got, including Hubert, put a lot of effort and are far more dedicated than some of the younger guys we’ve taken on over the last few years.

“Having now got involved and we’ve got four polish guys here and seeing their keeness for manufacturing, it’s vital if we want to stay in business.”

newest oldest most voted
Jason
I’m an IOW ex-pat, living in Sweden. I have recently been having a number of discussion about a migrants role in society and acceptance and something about this doesn’t sound right to me. When does a Pole living on the IOW become a ‘local’? Where are you defining local? If they are paying council tax, income tax, buying from local businesses, using IOW transport why are they… Read more »
Vote Up00Vote Down
Helen C

Totally agree with you Jason. I praise CM for employing these guys – why shouldn’t they.

It’s just the fact they pulled the heart strings for the ‘local jobs for local people’ argument to help get permission then do the opposite.

Vote Up00Vote Down
Debby Robinson
Sorry but youâ€™ve missed the point entirely. Please play the video. This piece isnâ€™t about foreign labour â€“ itâ€™s about Cheetah Marine. When they pitched their Eastern Esplanade scheme one of the main â€˜selling pointsâ€™ was providing jobs for the town. This has been repeated over and over again as itâ€™s the only plus point that can be dragged up to support Cheetah Marineâ€™s impact on the… Read more »
Vote Up00Vote Down
Jason
Sorry, I don’t think I am missing the point. Where do you draw the line on local – if someone commutes from Newport and uses their wages to build a house there, does their shopping there and supports their family there does that disqualify them from local as the money is not going directly to Ventnor? What the employees do with their earnings is moot – whether… Read more »
Vote Up00Vote Down
Margie

From what I heard they had said the jobs would go to people who had grown up around Ventnor and didn’t want to have to travel to Cowes or further for work. Keeping it local.

I think Debby is right the issue is not about local jobs but more about people doing the opposite of what they said.

local? only if you’re born here according to some. regardless of what you put back into the community. daft isn’t it (and something i don’t agree with – i love a bit of diversity)

Vote Up00Vote Down
markm
My company has been an employer in the area for over 5 years. When we moved here, we expected to employ local people and expected to keep it that way. We did employ several local people, and it radiply turned into a nightmare. Every business (and as such, their employees’ salaries and the local economy) depends on the consistent performance of their employees; it’s vital to find… Read more »
Vote Up00Vote Down
Sally Perry
As I stated in the document I have no problem with Polish workers or workers from any other country (including England) and I can completely understand why they have employed these guys. The point I’m trying to make is that this is yet another of the arguments that CM used to gain permission to build their development which they seem to have gone back on. Remember the… Read more »
Vote Up00Vote Down
Debby Robinson

This piece is about Cheetah Marine, not foreign labour versus local.
Please see my response to Jason.

Vote Up00Vote Down
Roy
I lived on the island for 7 years in the 70’s and am just moving back, to Ventnor, which I love. My son was born here and is a true caulkhead. Whilst not appreciating the politics and history, I sense a lot of sniping at Cheetah Marine and their activities, some obvious , some surreptitious. Why ? I actually like the development at the Marina, the Boathouse,… Read more »
Vote Up00Vote Down
Sally Perry
Nothing surreptitious at all Roy. We’ve always been transparent about this one. When CM received their permission we wrote “As weâ€™ve said before, now Cheetah Marine have the planning approval, we wish them the best of luck, in fact I dropped over to their office the day after the planning decision to wish them good luck, but the lucky things had popped off on holiday for a… Read more »
Vote Up00Vote Down
BigEars
One or two people above seem to be going out of their way to be obtuse. Jason, local people means people already available to the local job market at the time that jobs are offered by Cheetah Marine (regardless of whether they are any good or not). If we were to take it to mean anybody who arrives in the locality to take up a job with… Read more »
Vote Up00Vote Down
hoildaymaker

This was never about the polish or Hard work.
It is simply about two things.

2) Cheap labour (wherever the source)

Vote Up00Vote Down
paul
I wonder if those people critisizing Cheetah Marine’s use of non local labour (Jason makes more sense on the definition of local) have ever employed ‘local’ labour – it’s not a happy experience when the ‘local’ preference is a 3 day working week. What do you do then – let the business go. I agree with Roy – too much sniping at Cheetah Marine, and they wanted… Read more »
Vote Up00Vote Down
Sally Perry

Vote Up00Vote Down
Roy
Are you allowed two contributions in one day ? :) Actually this situation is summed up perfectly by my search for a house, which gave me the opportunity to stay in 5 good local hotels which I did for variety and to get to know the locality. Quite a few friendly owners shared the same view. “Local people are often unemployable and looking for an easy life… Read more »
Vote Up00Vote Down
Debby Robinson

GOOD GRIEF. WATCH MY LIPS.
THE PIECE WAS ABOUT CHEETAH MARINE’S HYPOCRACY & MISREPRESENTATION IN ORDER TO OBTAIN PLANNING PERMISSION.
IT WAS NOTHING TO DO WITH THE RIGHTS OF DIFFERENT NATIONALS TO OBTAIN WORK LOCALLY IF THEY WISH.

Quote: GOOD GRIEF. WATCH MY LIPS.
THE PIECE WAS ABOUT CHEETAH MARINEâ€™S HYPOCRACY & MISREPRESENTATION IN ORDER TO OBTAIN PLANNING PERMISSION.

It appears you have accused Cheetah Marine in a public domain forum; of committing an act that may be illegal? Are you certain of your evidence to make such a statement?

Maybe it is time that people let this conversation about cheetah marine end?
The plot of land is starting to look great down there. The building has been designed very well and is fitting in to it’s surroundings. I think what they have done down there is a vast improvement of how it looked before.

Vote Up00Vote Down
Starheliomos
I too say well done CM for running and expanding a business based in Ventnor. Of course there are some unfortunate issues concerning the paddling pool wall and the lease but for these I blame the idiot officials who agreed these items. My only criticism is the colour blue of the boat factory which I think is too dark! — If only they had matched the fish… Read more »
Vote Up00Vote Down
Roy

I think we all need to look at the bigger picture, and be more objective. The end result is pleasing and a dramatic improvement to the landscape. The end justifies the means here. I do agree though the New England washed lighter blue look of the fish factory would have been softer and easier on the eye, that would be my only criticism.

Vote Up00Vote Down
Helen C
Having read all the posts it seems that other businesses have raised some worrying points re issues with ‘local’ staff. Maybe we have been lucky but all of our staff are IOW nationals (LOL) and are fantastic but I would certainly employ anyone from overseas if I thought they’d be a good part of our team. If most of Cheetah Marines staff are ‘local’ then I can’t… Read more »
Vote Up00Vote Down
fat boy fat

I was beginning to think I was the only one who diden,t object to Cheetah marine development it,s an impressive building helping employment for local(who said that) people and for goodness sake at least someone has spent some money on the seafront.As for the definition of local you can argue that for as long as it takes the town council election results to come in!