Residents have until Friday to have their say on plans by the developer who has an enforcement notice against them for clearing hedges, flora and fauna near Scotchells Brook, Lake without authorisation 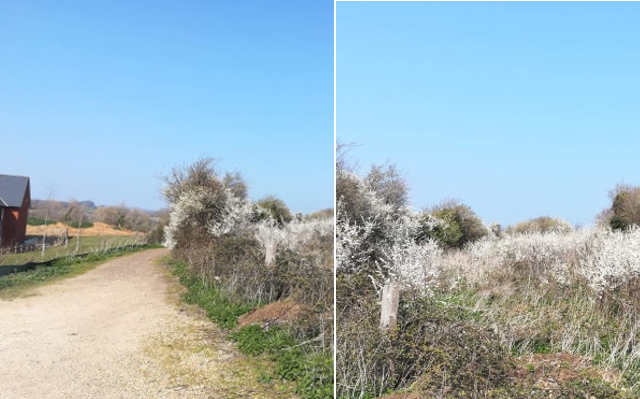 Residents have until Friday 18th October to have their say on a planning application for a bungalow on land between Premier Inn and School Field, Lake.

You can see all the plans and comments on the council’s planning Website.

Many concerns have been raised by residents, the parish council, the Ramblers and the Isle of Wight ward councillor about the plans submitted the same group responsible for the unauthorised clearance of hedges and flora at Scotchells Brook, Lake earlier this year.

“As Ward Councillor I wish to raise objections to this application on the grounds of where it is located and access to the property.

“This bungalow is at the end of a rough unmade road already causing problems for the existing residents, and unsuitable for any more developments. Access is also a narrow turn in off a very busy road so unsuitable.

“The bungalow is also far too close to the local Primary School which could impact on required school privacy.

“Finally I know it’s not a material objection but the fact that the applicant is already bull dozzering the land, destroying trees and habitat, shows he has assumed permission will be granted. This needs to be taken into consideration when making the Decision.”

“This is an accident waiting to happen … There is not enough room for a small car to pass a pedestrian safely, let alone a lorry or fire engine fitting all the way down there.”

She goes on to claim,

“On the planning application it states that there are NO trees or hedges on the development site. This is not true.

“The whole site is filled and surrounded by trees. You cannot access the site without demolishing trees. This would be another devastating loss of trees to the area especially after recent events with the land and protected trees behind the Premier Inn being demolished by the same company.”

Ramblers object
The Ramblers Association on the Island have objected to the plans, stating concerns over vehicle access and visibility, the removal of hedgerows and trees/bushes, as well as lack of information about how the public bridleway will be maintained.

“Material considerations are inadequate and inappropriate access arrangements, adjoining the playing field of a school (safeguarding concerns), will obliterate a historical asset site, no environmental assessment (habitat for wildlife, possibly including badgers).”

You can see all the plans and comments – as well as adding your own – on the council’s planning Website.

It doesn’t matter who objects it will probably get approved. Another application with 126 objections , including the Parish Council got planning approval last week.

It will go through on a nod as usual.. funny handshakes all round and stuff anyone who objects.