The first communities set to benefit from the multi-million pound rural fibre broadband partnership between the Isle of Wight Council and BT, were announced today (Monday). 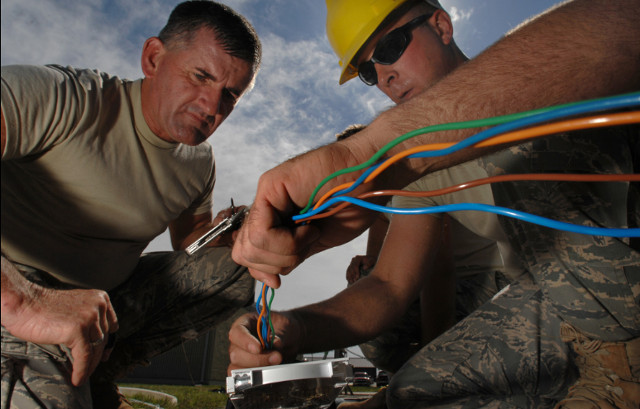 Work to connect the first rural communities for the partnership on the Isle of Wight will commence shortly, enabling some customers to place orders for high speed fibre broadband during summer 2014.

The first communities to benefit from new rural fibre broadband infrastructure during the project’s first phase include parts of Shalfleet, Gurnard, Whippingham, Brighstone, Shorwell and Merstone.

As the project gathers pace and more areas are connected, the council will provide the latest information on its website. In addition, the website will detail all areas to be covered by the project via an interactive map.

The multi-million pound partnership is jointly funded by the Isle of Wight Council, which is investing £2.4 million in the project to match the funding provided by the government’s Broadband Delivery UK (BDUK) programme.

“This is an important investment for the council in supporting the Island’s connectivity to the mainland and indeed the world and as a springboard from which the Island’s economy can grow.”

“Homes and businesses in some of our towns are already seeing the benefits of superfast broadband and we are delighted that work is starting to connect the largely rural parts of the Island. Having fast internet speeds across the whole Island is not only vital to the success of our small businesses, it is also key to attracting inward investment, one of the council’s key priorities. In addition, this investment will help us as we look at innovative ways of delivering more council services online. This is very important as the council looks to make financial savings over the coming years.”

Choice of providers
The new fibre-based network is open to all broadband providers on an equal basis, so customers will have a choice of broadband suppliers. Households and businesses on the Isle of Wight will therefore benefit from a competitive market, bringing greater choice and affordable prices from a wide range of broadband providers.

The technology will boost the competitiveness of local businesses, helping them to find new customers and operate more efficiently, whilst opening up a host of new learning and development opportunities for households.

quote “The technology will boost the competitiveness of local businesses, helping them to find new customers and operate more efficiently, whilst opening up a host of new learning and development opportunities for households”

That sounds really good. What exactly does it mean and could you now give a tangible example of this.

Or is it all just rubbish?

Vote Up00Vote Down
ThomasC
I work from home a lot and use my connection to transfer large files for work etc etc. I have recently got Fibre To The Cabinet (FTTC) broadband. It makes a big difference to my working day. If you’re running a business that makes a lot of calls this opens up IP telephony which will drop calling costs. Everything to do with online communication is just easier.… Read more »
Vote Up00Vote Down
Cynic

It is a lie! Fibre-based broadband is not available in the largest rural village in the “Intervention Area” (Bembridge) and currently BT has “no plans to install it”.

I understood that fibre-based broadband was installed in the then two schools in Bembridge as far back as 2004/05.

Vote Up00Vote Down
ThomasC
Dedicated fibre runs have been around for a long time, but what the programme being run by the council and BT is delivering is increased residential and business broadband speeds that don’t require extremely expensive dedicated fibre installation to the property. These are generally delivered by running fibre to roadside cabinets and then using your current copper line in to your house/business premises to carry the broadband… Read more »
Vote Up00Vote Down
Cynic

Vote Up00Vote Down
ThomasC
So Bembridge isn’t in the first phase. With download speeds like that it could be you’re not a priority! I’m sure BT will get it sorted out in due course, or you could move somewhere nicer with better connectivity (like the areas in phase 1 of the roll out). Or wait. Open Reach’s DSL tester isn’t always accurate unfortunately, but it’s the best guide you’ll get. Our… Read more »
Vote Up00Vote Down
Cynic

Note- the pathetic 0.75Mb/s UPload (this check by SpeedAnalysis(dot)com.

Thats just rubbish how is a Bemberidge business supposed to operate with those speeds.

What is more concerning is there was a 400 ping ….thats a lot of packet loss

Isn’t this a waste of money and didn’t the council have to put some in?

I think the council contribution is over £3m isn’t it?

Vote Up00Vote Down
ThomasC
Something like £2.7m was put in by the IWC, which is funding FTTC roll-out to the intervention areas, which *might* not have happened if the funding wasn’t there. It’s a cash bung to BT, for work they probably would have done anyway, that IWC Council Tax payers are funding. It’s part of a national programme, which was opened up for tenders to a framework, but the other… Read more »
Vote Up00Vote Down