Council are cutting 29 roads from snow gritting routes, including the Military Road (but add two routes)

29 roads removed and two routes added (because of St Mary’s roadworks), but Cllr Ward says, “Please take extra care when driving in dangerous conditions, especially if the roads are icy or frosty, or if it’s snowing” 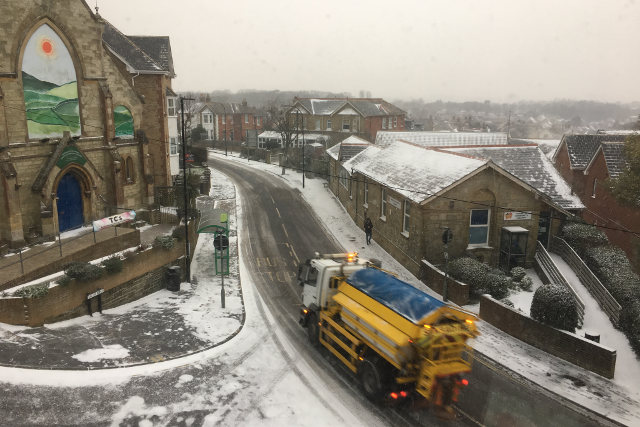 A fleet of gritting machines will return to the Island’s main routes this winter to keep conditions as safe as possible for motorists.

The Isle of Wight Council has published a gritting route map to help people identify those routes which will be treated in freezing conditions as part of its winter maintenance service.

Around 35 per cent of the Island’s total road network will continue to be treated this year — considerably more than the 25 per cent average for local authorities in the South East.

Cuts to budget
However, as part of the council’s 2019-20 budget savings, and following a full risk assessment, a number of roads have been removed from this year’s programme including the Military Road, Thorley and Wellow Main Roads, East Ashey Lane and Yaverland Road.

The route between Northwood and Shalfleet via Porchfield, and including Whitehouse Road to Vittlefields Cross, will be treated in the expectation of higher than normal traffic volumes using this route during the St Mary’s junction improvement works

“The council’s focus has to be on the Island’s primary routes — those carrying the highest volumes including key commuter routes — as it is not practical or economical to salt every road.

“Despite the need to make savings to set a balanced budget, we have ensured our arterial routes are covered to keep the Island moving in times of snow and ice. We will continue to monitor the situation and, should the need arise, carry out bespoke gritting where necessary.

“We will also continue to treat pavements in town centre locations in snowy conditions.”

Autumn parade
Island Roads, which deliver the winter service on behalf of the council, typically run the service from November until the end of March, however the company began its close monitoring of the network conditions at the start of October to ensure that any abnormally cold spell could be responded to if required.

They have also taken delivery of around 1,600 tonnes of salt, a comparable amount to previous years, in readiness for the winter season.

Later this month the company will also begin its annual Autumn Parade when all the winter fleet of vehicles and equipment are re-tested, and drivers ride out in the gritting vehicles to familiarise themselves with the new routes.

“Please take extra care when driving in dangerous conditions, especially if the roads are icy or frosty, or if it’s snowing.

“Always drive according to the conditions. Just because a road has been gritted doesn’t mean it is safe to drive at normal speeds in poor weather conditions.

“While we do everything we can to keep traffic moving during severe winter weather, it is important for drivers to drive with caution and consider whether their journey is absolutely necessary.

“I’d urge road users to visit the Website which features a winter maintenance map highlighting the routes which will be salted in the event of ice and snow.”

12 Comments on "Council are cutting 29 roads from snow gritting routes, including the Military Road (but add two routes)"

newest oldest most voted
Colin
Appleford Road links Chale Green to the Niton to Rookley road and is the main route out of the village. Because of the undulating nature and the amount of water that runs onto it, the road is dangerous in any frost let alone icy conditions. One resident suffered life changing injuries when his car slid off the road about three years ago on a slippery surface. How… Read more »
Vote Up43-3Vote Down
chartman

I’d say all the councillors are absolutely UN neccessary.. ! Vote them out. Simple.

Vote Up230Vote Down
Highway to Hell
Looking at the map and information, Island Woes have decided NOT to grit Foreland Road in Bembridge. They are gritting Steyne Road and the High Street / Sherborne Street, but not the 1/4 mile of Foreland Road in between these other roads. The little pink ‘Slippery as F*&^’ bit sticks right out… As opposed to fighting amongst themselves / the entire village / anyone on Facebook /… Read more »
Vote Up28-3Vote Down
tyke
I agree with your sentiments entirely HtH but it is not Island Roads but the IW Council in its relentless pursuit of cuts (did you hear the one about austerity ending, by the way?) that has decided to make these reductions. The question for me is how many of these routes could be saved using the money currently being paid to a certain consultant hired by the… Read more »
Vote Up39-1Vote Down
chartman

Yep, + the wasted £9M on the roundabout that seems to be a complete waste of money….

There is a frost hollow in Appleford Road where black ice develops, its marked by a hole in the adjacent farm hedge where the cars crash through. Is there any chance of ice warning signs being put up from this November-March next year?

Don’t be stupid… that would cost money :(

A couple signs would be loads cheaper than calling out the police to close the road, fire crews to cut car occupants free, ambulances to take them to hospital, medical care etc etc. And lets hope that no one gets badly hurt although when the shock sets in that can be worse than the physical injuries sustained.

The name of the game is budget deficit avoidance…Here’s the council’s thinking…. don’t grit = save money. Crashed cars etc. will come out of the emergency service’s budget. Not our problem. Wait till there’s an RTC with a fatality and see if a corporate manslaughter charge of gross negligence pops up…. You have been warned!

Vote Up50Vote Down
Benny C
I’d like Ian Ward to take extra care when carrying out his role. Unable to grasp how to run his brief, not reading papers properly before votes, failing to understand contract terms – the list goes on and on. We need better acumen than this inept old boy nonsense. That way less money would be wasted on vanity projects. The Undercliff Drive feasibility study would pay for… Read more »
Vote Up7-1Vote Down
Spartacus

Typical Tories increase council tax and more cuts they are an absolute disgrace and should be ashamed.

Isn’t that strange! We are paying more for less once again. How much longer do we have to put up with this mob in charge. I register my vote of no confidence in all of them. Come the revolution.