All sorts of tributes will be paid at Wightlink to the courageous servicemen and women who risked their lives on D-Day 75 years ago. 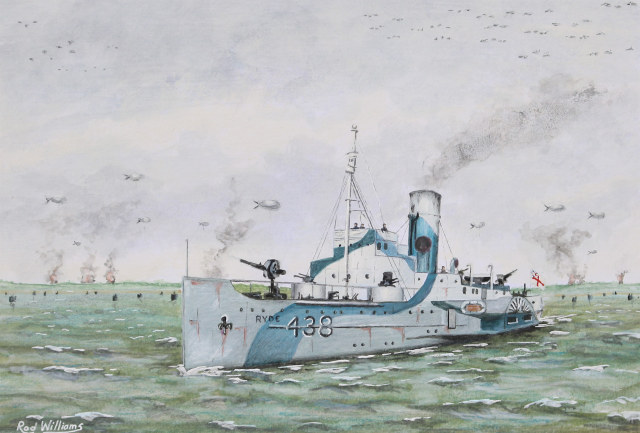 As Portsmouth gets ready to host the UK’s national commemoration of D-Day tomorrow (Wednesday 5 June), Wightlink will be paying tribute to the soldiers who fought their way onto the beaches of Normandy – and everyone who was involved in the Allies’ invasion of France in 1944.

The Bunker Girls will entertain travellers in the morning, there will be displays from the Historic Ryde Society and even a genuine World War Two jeep on the Pier, courtesy of Wight Military and Heritage Museum.

Victoria of Wight passengers
Customers on Wightlink’s flagship Victoria of Wight will learn more about the commemoration event on Southsea Common and the role played by the Isle of Wight ferries in wartime on the 11:00 sailing from Portsmouth and the 12:00 from Fishbourne.

A professional commentator will give a talk on both crossings and there will be songs from The Bunker Girls on the midday sailing.

Bunting galore
Ferries and ports on the Portsmouth routes will be bedecked with patriotic red, white and blue bunting and customers on some crossings may enjoy unrivalled views of the flypasts by RAF aircraft and the Red Arrows together with the activity on the water.

Foot passengers crossing from the Island for the day from Ryde Pier Head or Fishbourne between 5-9 June can travel for a special price.

“On the 75th anniversary of the D-Day landings, our thoughts will be with the veterans who embarked from these shores to strike a decisive blow against Nazi Germany.

“We at Wightlink remember and recognise their courage and also pay tribute to our fellow mariners in the Merchant Navy who played such an important role throughout the conflict.”

Island connection
Several Isle of Wight ferries took part in the Second World War. Four of the paddle steamers that sailed between Portsmouth Harbour and Ryde Pier Head were requisitioned by the Royal Navy.

Guns were fitted on deck and the ferries were painted in camouflage ready for their new role as minesweepers.

HMS Ryde (the former paddle steamer Ryde) and two of her sister ships, saw action on the Normandy landing beaches as anti-aircraft support for the artificial Mulberry Harbours.