Cowes Floating Bridge could be fitted with side thrusters, Scrutiny Committee hears

An update on several aspects of the Cowes Floating Bridge was given at the Corporate Scrutiny Committee, including news about possible side thrusters 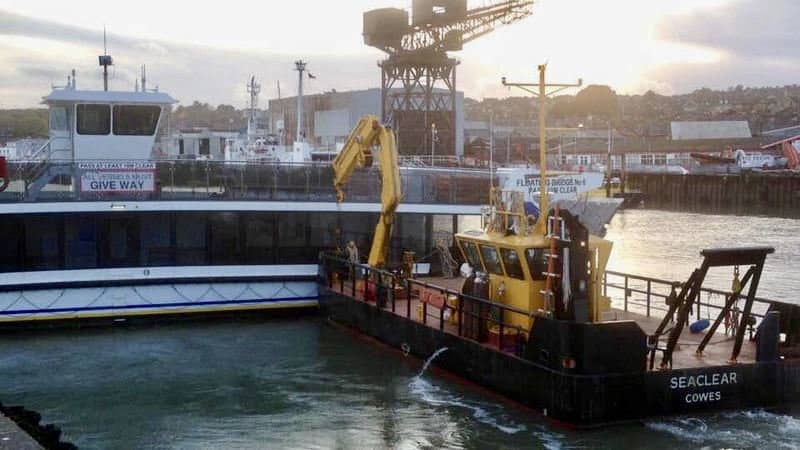 The Isle of Wight Corporate Scrutiny Committee opened tonight (Tuesday) with a public question about the Cowes Floating Bridge.

Michael Douse from East Cowes had asked whether Floating Bridge 6 (FB6) had been contractually taken over by Isle of Wight council from the shipbuilders (Mainstay Marine) and if so, how much longer does the warranty have to run?

Stewart: It has not been formally accepted
Leader of the Isle of Wight council, Dave Stewart, replied that

“It has not been formally accepted under the build contract pending resolution of the issues experienced with the floating bridge.”

Latest update from leader
Later in the meeting, members of the Committee were presented with a update on the current position of the Bridge – which has been suspended since 14th July 2020 and will have been out of service by more than 13 weeks by the time it returns.

Cllr Stewart said discussions had taken place since last Committee and a meeting had been held with “two ‘described as’ experts nominated to discuss Floating Bridge matters” with Cllr Ward and himself.

He said there was ongoing dialogue and that legal proceedings in accordance with contractual requirements continued.

Side thrusters to be considered
Senior officer, Alex Minns, shared a presentation with members, pointing out the problems with the hydraulic system. He said they’ve worked with the shipbuilder, who had removed pumps, valves, etc and that the repair was a “major job”. The rebuild had commenced and some refitting already begun. FB6 was planned to return to service on 17th October.

Mr Minns said the distance of clearance over the chains had been a problem for some time, that it was discussed with various experts, and installing side thrusters appeared to be most feasible option.

Mr Minns went on to add that eight options are being evaluated independently and a report is due at the end of October which can be shared with interested parties.

The designer and builder of FB6 are cooperating with the council and they are hopeful that some of the financial losses may be recovered. He said it would be inappropriate to comment on any legal aspects.

Push boat costing £97,000 per annum
Cllr Stewart said the cost for push boat was in the region of £97,000 per year, and although the side thrusters would constitute a significant capital investment, there would be a positive impact on revenue budget.

Cllr Jones Evans pointed out some of the many repairs and amendments that have had to be made to FB6 over the years. She asked,

“When are we going to finally realise the design is fundamentally flawed?”

Stewart: My priority is to make sure East and West Cowes get that service
Cllr Stewart replied,

“That is the subject of legal discussions taking place, and if members want we can go right back to the original contracting and signing of the vessel over and take it right through the journey.

“We are where we are, my priority is to make sure the community of East and West Cowes get that service, because I think it is really important to them, but it’s a good and fair question. Am sure the legal discussions will look to ask that question on your and my behalf.”

Lilley: Local economy and families are suffering daily
Cllr Michael Lilley explained that when had sight of the risk register in 2017 (which was dated 2015) it clearly stated there was a problem with the chains. He asked,

“It’s been a flaw within the whole design and the council need to tackle the designers of this, because they built in a flaw.

Alex Minns said the boat will return on 17th October and with the push boat in operation for the foreseeable future. He said the report for the for side thrusters is due at the end of October.

Quirk: Full report, in camera if necessary
Cllr Chris Quirk said once the legal situation was completed, the Scrutiny Committee should have the Leader present everything that has gone on right from the start and what’s projected for the future.

“If necessary, doing it in camera.”

Andre: Environmental impact?
Cllr Debbie Andre said she was very concerned they were looking at this just in the short term.

“Do we have any evidence that we are monitoring how this is affecting the marine life?”

Cllr Stewart said it was a fair question and that it would be taken away.

“The question is, were they given the right answer? I can’t believe a marine architect would design something with such a fundamental flaw with relation to the chains. Probably one of the major questions to be asked.”

Jones Evans: has the IWC been saving for next one?
Cllr Jones Evans said,

“In the business case documentation for FB6 it said the IWC should be saving yearly for next floating bridge. How much money have we saved for the next one?”

Cllr Stewart said he hadn’t seen that entry and that she’d obviously seen something he hadn’t.

“If that is in there I will make enquiries and give you a response.”

Cllr Lilley proposed the committee received an updated report at their next meeting.

19 Comments on "Cowes Floating Bridge could be fitted with side thrusters, Scrutiny Committee hears"

Whatever you do, don’t leave it with Cllr Ian Ward, he’ll probably fit the thrusters on the wrong side!

Maybe he was on line at the meeting browsing for thrusters. I fully expect he will order them, Dave Stewart will arrange to be photographed with them and Councillor Churchman will issue a carefully prepared statement confirming that “with these new Thrusters in place the island can once again look forward to a reliable and efficient hovercraft service…”

Vote Up200Vote Down
planespeaker
This is enormously depressing. Surely Islanders deserve better than this. It’s very strange that the Stewart led Council are unable to accept that FB6 is the wrong vehicle for the task that it has to perform and it makes one wonder if their dogged refusal to admit to that indicates the existence of another agenda. Now they are considering fitting side thrusters and thus providing another piece… Read more »
Vote Up62-3Vote Down
Spartacus

Dave Stewart should be fitted with side thrusters then thrusted off to another planet.

Vote Up20Vote Down
carlfeeney
This can only end badly… even worse than now. Installing jets or props at each four corners of the chain ferry will not only cost a fortune, but they and the huge motor required to drive them will be yet another set of mechanisms liable to break down constantly. The force required to withstand a strong 3-4 knot spring tide against the side of the oversized chain… Read more »
Vote Up56-11Vote Down
chartman

Any costs for side thrusters should be covered by the builders ?

What Bob the builder

I didn’t know that you had any qualifications as a marine engineer Carl.

Sorry couldn’t resist this, taken from IOW Council website. The floating bridge runs a service seven days a week, all year round.
The crossing only takes a few minutes; so just turn up and you will never have to wait for long.

I did mention side thrusters a long time ago in relation to those used on the much larger Dartmouth floating bridge which operates very successfully in tidal conditions, but then theirs was designed for the job required.

Vote Up300Vote Down
bbrown
A retro fit of thrusters is possible with two transvers across the vessel and the amount of power required is often overstated. The fact the vessel used as a pusher has not only maintain it’s position in the river but also push the FB up the river against a 5kt+ tide. It should be possible to measure the amount of force required to maintain the position in… Read more »
Vote Up7-2Vote Down
hialtitude

Surely wings and a curly tail would be a better option.

I would suggest that the ‘fair questions’ Dinosaur Dave refers to are pretty basic and should have been ‘asked’ and thought through to conclusive actions long ago – by Ian Ward….Mr Ward……Mr Ward?…….MR WARD…yes, yes, the dark red ones with the elastic waistband are fine, now can we get back to Council business please?

Vote Up230Vote Down
lifelivermainlylagerquaffer
FFS! If it ain’t broken… Don’t fix it! It was working ok before it was meddled with. What an absolutely shameful and indulgent waste of tax payer’s money! If these bright ideas for the bridge had to be paid from the Councillor’s own pocket you can rest assured that the companies involved would be held accountable and fined for failure to deliver. This bridge when working is… Read more »
Vote Up170Vote Down
lifewriterbutmainlybeer

It’s not a bridge and it doesn’t float.

Although if it keeps grounding on its own chains on the river bed, it isn’t really floating.

As the chains pass through the vessel how can it ground on it’s own chains?