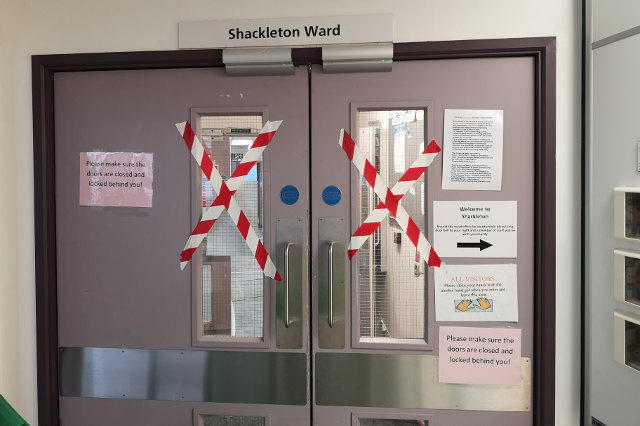 Five elderly dementia patients have been sent to the mainland — costing the NHS £330,000 in the interim — after the closure of their dementia-friendly Shackleton Ward.

Following the open-closed nature of the Shackleton Ward at St Mary’s Hospital — specifically built for dementia patients with a £200,000 refurbishment bill — five patients have not been able to be relocated on the Island and have been sent further afield for care.

In September, the Isle of Wight NHS Trust announced the closure of the ward and said, in line with the Mental Health Blueprint, patients would be cared for in the community instead, in their own homes or nursing and care homes.

At the time Dr Lesley Stevens, the trust’s director of mental health and learning disabilities, said:

“Creating this new service fits with the priorities set out in the Mental Health Blueprint and the Isle of Wight Health and Care Plan, both show that to improve mental health services we must change our model of care to be more community-based.”

During previous closures, patients were sent to mainland hospitals on an interim basis but a now more permanent position has been arranged for some vulnerable patients — causing a £145,000 overspend for the IOW NHS Trust.

RCP: Sending patients far from home ‘shameful’
A report published by the Royal College of Psychiatrists (RCP) has said hundreds of mental health beds are needed urgently to stop the ‘shameful’ practice of sending ill patients — who require acute, inpatient mental health services (a different type of service provided than those with complex mental health needs and dementia) — far from home for treatment.

The RCP has calculated that those patients in OAPs travelled a total of approximately 550,000 miles in the past year – equivalent to going around the world 22 times.

“Cuts in the number of mental health beds have gone too far and patients and their families are suffering as a result.

“Trusts struggling with dangerously high levels of bed occupancy are being forced to send seriously ill people hundreds of miles away from their homes for care. That must stop.

“Beds are being closed to move resource to the community so that people can be treated close to friends and family and without having to leave their homes. The reality in many areas is that beds have been lost and investment in community services is only now starting.

“As a result, precisely the opposite effect has been achieved with some severely ill patients sent hundreds of miles for care.”

In a performance report for mental health and learning disabilities services for the IW NHS Trust board, the Trust said ‘the older people’s mental health service are liaising closely with the mainland provider in order to ensure timely discharge and return to the Island occurs’.

IW NHS: Working to create new service
The IW NHS Trust have ensured patients on the mainland will have as short a stay as possible with effective discharge care. But Dr Stevens confirmed a community-based service will be better for people. She said,

“We are working with the local clinical commissioning group to create a new service for older people with dementia and mental health needs that will support them in the community, including in their own home and in residential or nursing homes.

“The community-based service will be better for those people needing support, their families and the wider community.”