A general rule in life is, if you don’t want others to know, don’t discuss it in public. Certainly don’t do it loudly on a busy train heading back to where you live. 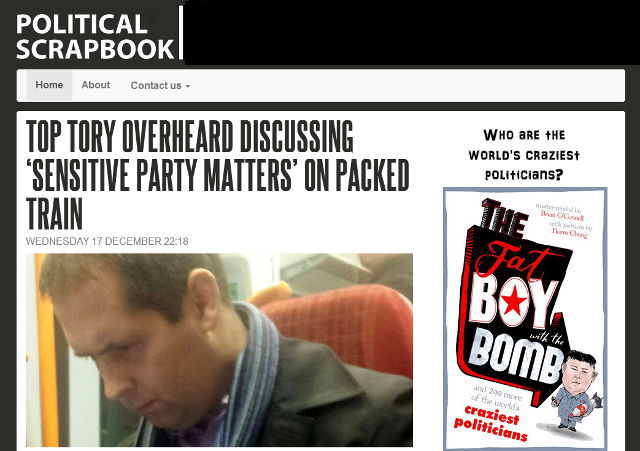 Former Conservative Isle of Wight council leader, David Pugh, is the subject of the latest story on an influential political Website.

“I’m on a train!”
The brief teaser article goes on to allege that a phone conversation made by David Pugh – described as a party hack – was overheard by a fellow passenger on a train back to the Portsmouth on Tuesday evening.

David, a member of the Isle of Wight Conservative Association, is alleged as discussing ‘sensitive’ internal party matters on the phone.

OnTheWight contacted David Pugh this morning with two simple questions. He shared the text conversation he’d had with Political Scrapbook, but chose not to answer the questions we’d posed. If we hear back from him again, we will an update here.

Update 21:25: David came back to us (at 11:12 this morning, but we’ve been unable to update this) with the answers to our initial question and confirmed that he was on the train on the way back from London to the Island Tuesday evening. He said that the call as lightly-described by Political Scrapbook was not familiar to him. We intend to follow up with some more detail questions.

Background on DP and Andrew Turner
David Pugh was defeated in the 2013 local election by independent, Richard Priest.

Later that year, he was linked to an attempt to oust Andrew Turner as party candidate for the 2015 election.

Then earlier this year, he was one of those involved in the putting together a dossier challenging the legality of expense claims made by Mr Turner after he switched his first and second homes.

David Pugh confirmed that OnTheWight last month that he has no intention of standing as a candidate in the 2015 election.

PughTube emerges again
Political Scrapbook finished their article with a link back to the video footage caught at the end of the council Chairman’s Valentine’s Ball in 2011 (the original video has had more than 16,000 views).

David Pugh was caught on camera shouting expletives at Carole Dennett, the MP’s partner at the time.

The Valentine’s Ball story was broken by OnTheWight and led to an investigation within the Isle of Wight council, following a letter of complaint from Carole Dennett.

You’ve seen what floats on the top of cesspits, right?

It puts into perspective babytory’s “Obviously you don’t frequent the Bargeman else you would hear policy and ideas being formulated ” doesn’ it? :-))

Sounds like a rough crowd in the Bargeman then.

Oh that’s made my day……..If the Boy child is a top tory then they really are stuffed.

Be afraid David, be very afraid. Discretion, look it up in the dictionary.

We already knew that, didn’t we! Shocking manners, which is why the word ‘boy’ seems to hang around references to him despite increased age, as he is so childish in his poor behaviour.

What we all really want to know is what the “sensitive party matters” were, but maybe we will have to wait for The Mail on Sunday.
BTW, the only Island politician I have seen at the Bargeman’s Rest is MP Andrew Turner. Maybe the Island Conservatives will have a punch-up there one night ?

I hope whoever he’s employing to sanitise his Wikipedia page is actually getting a raise after yet another round of negative publicity..

Would that be “Cratus Communications” by any chance?

I’m surprised anyone on that train could understand what he said, the nausingly nasally nincompoop.

OH how the self important ‘mighty’ has fallen! Pure joy to watch this man get his long overdue comeuppance !

But what did he actually say?

If you click on the link to ‘Political Scrapbook’ at the top of this piece, one of the first references that comes up is for their Friday 19th edition. Not exactly earth-shattering. Looks like we can expect another tantrum from DP around Jan. 2nd, (yawn).

Vote Up00Vote Down
tryme
After the pieces here that highlight the actions of a handful of resentful local Tory party members trying to destabilise AT, and all their nastily detailed but distorted reasons for doing so, it’s nice to turn to the CP and Island Echo to see Andrew Turner is continuing to do typical MP-type things! He hasn’t gone into a beleagured shell after all. Glad to see it! (Though… Read more »
Vote Up00Vote Down
retired Hack
It remains to be demonstrated, Tryme, whether Island Echo and the CP have their ears sufficiently close to the ground. Island Echo, in particular, has a niche is publishing Press releases without feeling the need to check the alleged facts in them. As previously mentioned here, there is expected to be a meeting of the IWCA executive on January 9th. I don’t know whether the discussion there… Read more »
Vote Up00Vote Down
tryme

I’m talking about a balanced picture of AT’s activities, retired Hack, and looking at the CP and Island Echo is part of getting that picture, as it won’t necessarily be found on only one website.

Oh, right, I thought you were saying OTW’s coverage was distorted. Look at Island Echo by all means, but note who their source is for Andrew Turner-related coverage is. It is Andrew Turner’s newly-appointed top Totland-based media spokesman.

If you want to read about AT’s activities simply look at his website. It’s where the same press releases you see elsewhere are published.

“Journalism is printing what someone else does not want printed: everything else is public relations.” – George Orwell.

A better and more independent source is publicwhip.org.uk/mp.php?id=uk.org.publicwhip/member/40333#divisions

Vote Up00Vote Down
tryme
Well thank you RH for saying I may look at other websites ;-) Press releases are printed here too, you know. They often tell us about activities and events that have indeed happened, of course! Can be useful. I think one *always* has to look at the source of any article or sentiment, wherever it appears, and that very much includes about AT too, here and elsewhere.… Read more »
Vote Up00Vote Down
retired Hack

Press releases “on here” are checked for factual accuracy and newsworthiness. Newsworthiness is, I grant you, subjective, but Press releases are not newsworthy per se (see George Orwell’s observation above). And they are certainly not factually accurate per se.

Vote Up00Vote Down
tryme
As you say, subjective, but nevertheless about things AT is saying or doing. Whether lighthearted and uncontentious matters or more serious ones, they are all part of the picture, and show AT is not confined to a dark room all the time on account of Pugh’s pursuit, which is the level I was pitching it. I’m not a naiive, RH, and I had myself noted what you… Read more »
Vote Up00Vote Down
Ian Young
You can debate the merits or otherwise of Mr Turner all you like, but the fact remains he is a Tory from the right of his party who seems divisive and still has questions to answer regarding his expenses. As you would expect he has supporters, and detractors, but for those of us who have yet to discover the elusive good Tory politician no amount of open-minded… Read more »
Vote Up00Vote Down
tryme

I hope you’re not including me in people who are “debat[ing] the merits” of AT here today, Ian. Such have been the sensitivities in response to my 3.19pm post that I have to keep re-reading it to remind myself I did in fact say what I thought I did!

In all honestly Thyme I didn’t have you in mind.