The unseasonable temperatures we’ve been experiencing in the last couple of weeks could be an indication of the impact of climate change and will certainly have an effect on hibernating animals and insects. 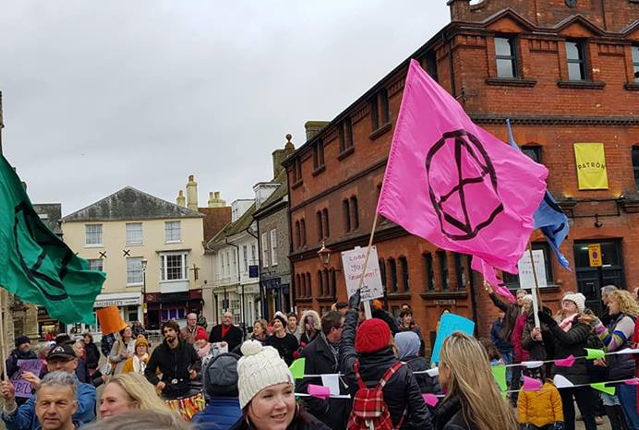 This Saturday, 2nd March, Islanders concerned about the future of the planet will be gathering in St Thomas’s Square for another climate change rally (and this time, a picnic too).

In January around 200 Islanders came together for the Extinction Rebellion (XR) march through Newport, during which a letter was delivered to Leader of the Isle of Wight council, Cllr Dave Stewart, calling on his council to join others from around the country, including cities like Bristol, to declare a climate emergency.

To date, the group has received no reply from the council leader.

Focus of latest rally
Organisers say the focus of Saturday’s day of action will be the wider ecological emergency.

Campaigners are encouraged to wear black armbands and others will be carrying banners, placards and a coffin: standing in silence to signify the impact of increasing global temperatures on the earth’s delicate ecosystems:

Where and when
XR supporters will meet in St Thomas’ Square, Newport at 12.30pm on Saturday, 2nd March for a peaceful rally, calling for action.

This will be followed by a picnic in Newport – so don’t forget to take food, blankets and your singing voices!

newest oldest most voted
Steve Goodman
More than one unanswered letter on this subject has been delivered to Dave and our other councillors; here’s the latest one I sent to each of them before the latest full council meeting on Jan.27th: “Once again, I’m hoping you can help. On December 3rd last year I asked the audit committee, immediately before their discussion about investing millions off-island, if the council had considered the costs… Read more »
Vote Up5-5Vote Down
Steve Goodman

Tawai is a word the nomadic hunter gatherers of Borneo use to describe the connection they feel to their forest home.

Thanks to the Church on the Roundabout for hosting the picnic.

Thanks to those making donations at the screening; £115 raised.

And thanks for the reminders that we are paying a very high price for losing sight of the bigger picture and destroying what supports us.