Islanders marched through Newport on Saturday afternoon, raising awareness about the impact of climate change and calling on the Isle of Wight council to join other councils around the country and globe to declare a ‘Climate Emergency’. 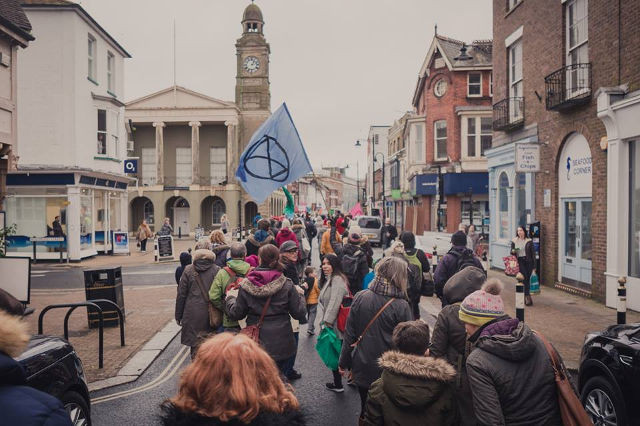 According to reports from those who took part, at its peak around 200 Islanders gathered in Newport on Saturday afternoon calling on the Isle of Wight council to join others around the country as part of the Extinction Rebellion (XR) in declaring a ‘Climate Emergency’.

Organised by the Extinction Rebellion Isle of Wight (XRIW) Group and supported by many community groups, the Labour Party, the Green Party, etc., they say the main aims of the event were to raise awareness about the movement and to pressurise the council to declare a ‘Climate Emergency’.

12 years to save the Earth
As widely reported in the global press last year, according to a 700-page report by the United Nations’ climate science body, we only have 12 years to make a change to our global energy infrastructure or risk dramatic consequences.

200 at rally
One resident who took part told OnTheWight he’d done a head count of 200 people, of all ages and political persuasions, who were gathered in St Thomas’ Square to hear the rallying speeches from this global movement.

Many then took part in a march through the town – including Fat Samba who added a festive feel to the event – up past the bus station, through St James’s Square and down to County Hall where a letter (see below) addressed to the Leader of the Isle of Wight council (IWC), Cllr Dave Stewart, was delivered.

Thomas Gladdis managed to capture some footage of the march, which he shared on Facebook.

Some not supportive
Many of those taking part then kept the momentum going and continued to march around Coppins Bridge. This led to some cars getting caught up in the march among those walking.

Those taking part say the majority of drivers were patient as the march continued through the streets, but this tweet below showed one driver making contact with those marching.

Photo gallery
Many thanks to Chris Jones and Lucy Boynton for sharing their photos from the event. Thanks also to Vix Lowthion (Green Party) and Maria Villa Vine (Labour Party) for sharing their photos from the event. The Letter
XRIW say that to date twelve councils around the UK have declared a ‘Climate Emergency’ and their hope is that the IWC will be added to this list in the near future.

4 Comments on "Climate Emergency rally calls for ‘positive change for the common good’: Photos and Video"

Great support. Thank you all for your support, I wish Ill health hadnt stopped us attending.

Please don’t ask our Council to declare a Climate Emergency, they couldn’t run the proverbial in a brewery let alone save the planet.

And I just had a horrible image of Dave Stewart in a Flash Gordon outfit… oh nooooooo…..