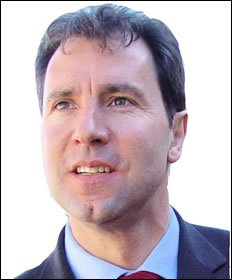 Those with an interest in agriculture on the Island will have been keeping up with the issue surrounding fallen stock.

For those not familiar with the phrase, this refers to livestock that have died of natural causes or been humanely destroyed.

Since the introduction of new EU legislation in May 2003, any farmer with fallen stock had to go through the expense of sending the carcass off the Island rather than be able to bury the dead animals here.

Island MP, Andrew Turner, has been closely involved in the discussions surrounding this issue and following his concerns that the emergency measures brought into effect in May this year (finally allowing legal burial of farm animals), are simply an interim solution, he called a debate in the House of Commons.

The result of this is that Dan Norris MP, Minister of State in the Department of Environment, Food and Rural Affairs (DEFRA), has committed to visit the Island in person to find a solution to the long-outstanding problem.

Acknowledging the problems faced by farmers on the Island, the Minster stated

“I have decided to visit the Isle of Wight to meet interested parties so that we can work together to find a medium and longer-term solution to the lack of fallen stock disposal outlets on the Island.”

Speaking after the debate Mr Turner said:
“I was somewhat surprised that the Minister gave a commitment to visit to the Island, but very pleased. It demonstrates that DEFRA and the Minister are finally taking the issue seriously and have acknowledged that the current arrangements can remain in place only on a temporary basis. The NFU have been working hard for years to make progress, but were frustrated because nobody seemed to be listening to them.

“There are difficult issues that need to be addressed. During my speech I called for some innovative thinking if a straightforward solution is not the best outcome for our particular circumstances. Some examples might be a pilot project for bio-digestion (which harnesses natural decomposing processes and as a by-product produces green energy) or sharing facilities with St Mary’s Hospital (which currently ships all clinical and hazardous waste to the mainland at considerable cost). I am pleased to say the Minister seemed receptive to these suggestions and indicated that they and other ideas can be considered seriously.

“I hope that we can now move forward and I look forward to welcoming the Minister to the Island. If Islanders have any different ideas on how this problem should be approached I would be happy to put them forward to DEFRA for consideration.”

He went on to say:

“Adjournment debates, such as this one, are the subject of a ballot which all MPs can enter to highlight important constituency matters – doing so can sometimes make a difference. In 2005 I raised issues about some other EU legislation which designated deceased pets as ‘landfill’ and threatened the future of ‘Pets at Rest’ a pet cemetery on the Island. I am pleased to say that, after some months, it did bring about a successful conclusion, both for Pets at Rest and similar businesses elsewhere in the UK. I am hopeful that we will also achieve a good result this time.”

The transcript of the full debate can be read online.

didn’t the hunt used to take away fallen stock for the dogs to eat? (yum! yum!)

Vote Up00Vote Down
No.5
There is provision for farmers in remote locations ( think Highlands and islands) to mange their own disposal. It was considered that this provision would extend to the island as the council does not provide any facilities for incinaration on the Island. Recent cases have highlighted this. It is impossible to comply with government and local council rules if they don’t supply the services required to comply.
Vote Up00Vote Down
Rowan

Biodigestion (anaerobic digestion) would be superb

A digester would reduce water pollution, and greenhouse gas emissions from methane.
It would generate usable (because contained) methane for energy, and a sterile fertiliser.