Racing was abandoned on Sunday on safety grounds, but crews were able to take place in the Newport Regatta on Saturday. 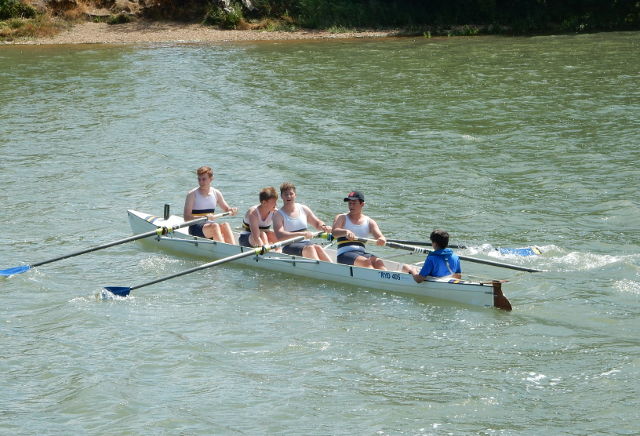 Ryde Rowing Club, sponsored by Wightlink, were due to compete at IW neighbours Newport Rowing Club’s Annual Regatta over the weekend (Saturday, 28th & Sunday, 29th July 2018) staged over a straight course, with no buoy turn, from their Clubhouse on the River Medina, with fours events held on the Saturday and small and Junior (age) events held on the Sunday.

This sheltered River location can normally be guaranteed to provide calm waters, but very disappointingly, especially after such a fine summer, the weather broke and the conditions, especially on the Sunday were very challenging – with high gusting winds and heavy rain.

The Ryde Club had two fours racing – the Men’s Coastal Junior Four of Tom Starkey, Tye Cameron, Ben Sanderson and Ben Toms, coxed by Dan Sanderson who were second in their heat, but failed to register a fastest second place to claim a place in the final – although there was some dispute about the timings.

New Men’s Novice Four
The Club also had a new Men’s Novice Four (pictured below) racing – with two members of the crew – Jonna Lewin and Gully Roghan racing for the Club for the first time having only started rowing a few weeks before.

They joined Paddy Kearney and Ben Toms – with Dan Sanderson in the coxswains seat one again – and they rowed remarkably well to register the fastest second place in their heat to take a place in the final where they finished third. Regatta abandoned on safety grounds
On the Sunday the Club was due to have a Men’s Coastal Junior Pair and a number of Junior rowers racing in Coxed Quads and single sculls – but after the heats and Finals of the Men’s and Ladies Senior Pairs events the regatta was abandoned in worsening conditions on safety grounds – with the small boats and Juniors a higher risk that the fours that raced on the Saturday.

Whilst I appreciate that members of Newport Rowing Club were disappointed that they could not race on Sunday, they should note that blocking the public right of way with their boats is illegal. A groups of tourists I met could not get past, as the boats were lined up right across the public footpath.