Double whammy for Isle of Wight Speedway Warriors and Wizards 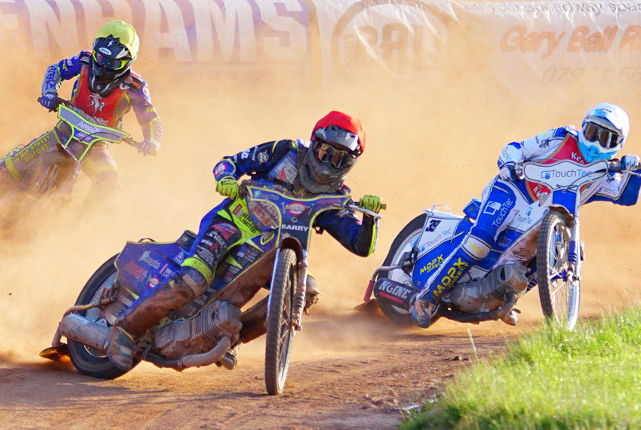 The Isle of Wight ‘Wightlink’ Warriors and Wizards speedway teams dished up a veritable feast of top draw speedway action last night (Thursday) as they repelled the challenge of both visiting sides to secure valuable league points.

Isle of Wight Warriors 51 Kent 39
On the second hottest day of the year so far, the Warriors management and volunteers worked tirelessly to combat the drying effects of the baking sun and stiff breeze and whilst there was some dust in evidence, it did not detract from the riders of all four teams delivering a match full of skill, determination and importantly plenty of passing.

The Kings arrived in the midst of another injury crisis that has hampered their season so far. Already without free scoring reserves Dan Gilkes and Nathan Ablitt, the Kings meeting earlier in the week also saw Alex Spooner return to the sidelines with a recurrence of a shoulder problem where he was joined by Jordan Jenkins who suffered arm injuries. They called in Mildenhall’s impressive teenager Jason Edwards as a guest rider for Jenkins, operated Rider Replacement facility for Spooner and covered the one vacant reserve spot with the Wizards Jamie Sealey.

The Warriors also encountered a problem of their own when Chris Widman suffered a clutch problem on his car close to his Leicestershire base and then with the help of family and friends faced a hurried dash to make the meeting. Whilst he did make it, he was forced to sit out his first ride as he wasn’t quite ready to get on track.

When the action did get under way the sides were inseparable and after ten races the scores were tied at 30-30 due in no small measure to some super overtaking from both teams. Particular credit to Kent skipper Rob Ledwith who rolled back many of his forty something years with a tremendous last to first ride in heat nine and that cracker was followed by another in heat ten when Warriors Georgie Wood carved his way to the front with a classy and stylish ride.

In hindsight, heat eleven may well have been the turning point in Warriors favour as the home pair of Ben Morley and Connor King both made telling passes to overcome their opponents for a two point advantage. A shared heat followed before a bizarre heat thirteen saw Ledwith and Wood lock horns with the visiting skipper getting into a tangle coming off the fourth turn that forced Wood to almost ‘drop anchor’  to avoid a collision. With the race continuing and Ben Morley well ahead for the Warriors, Wood clearly had no intention of risking anymore mayhem and swept past Ledwith for a crucial 5-1 heat win.

With Warriors only six ahead and two races to go nothing was finalised. Many in the stadium were expecting the visitors to introduce a tactical substitute for Sealey but for whatever reason that did not happen and so it fell to Danno Verge to produce one of his best ever Warrior rides charging to the front past Edwards. With team mate Chad Wirtzfeld comfortable in third the match points were banked which just left Wood and Morley (pictured) to breeze home in the last race for another 5-1 and nail the Warriors biggest win of the season.

Isle of Wight Wizards 21 Weymouth 15
To add the icing on the cake the Wightlink Wizards also wrapped a very steady home win against the Weymouth Wildcats for whom James Laker rode really positively.

The Wizards were solid if not spectacular with local boy Morgan Williams suffering machine problems that effectively ruled him out the evenings racing. Fortunately the rules in the Development League allow other team mates to cover these situations so Ben Ilsley and Chris Watts stepped in to ensure the Wizards were not short-handed.

“I’m absolutely delighted. The whole team rode really well and to me that’s just a taste of what this team can do going forward. We still need to find consistency in some areas of the team; however the boys can take heart from a good job, well done in track conditions that weren’t helped by the baking heat and stiff wind. We’ll set off to Cradley on Monday in good spirits and having been there once already this year we’ve got a fair idea of what to expect.

“As for the Wizards it’s great to see these lads improving almost every week and the chance to give them competitive races will only speed up their progress. I’ve got to say that Ben Ilsley as captain is doing a super job for the Wizards both on and off the bike but I feel so sorry for Morgan, he’s super keen but bike problems wrecked his night. I’m sure he’ll be ok next time. It’s not often we’ve been able to celebrate both Warriors and Wizards winning together and wow isn’t it a great feeling?”