Six year old Xander from the Isle of Wight proved that if you don’t ask you don’t get. He did ask, and then got to meet the editor and artists at his favourite comic – all the way up in Dundee at the Beano offices. 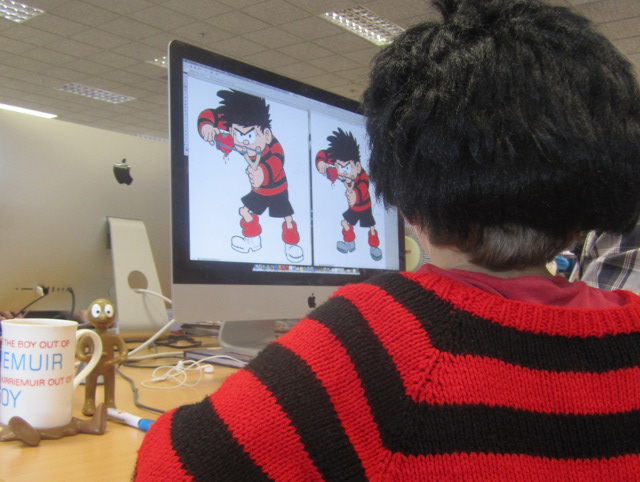 When we saw this news on Facebook, we asked Vix whether she’d like to write a piece about how Beano-crazy Xander Craggs ended up at the offices of the iconic comic. Ed

Summer holidays are made for memories – for some children these should last well into the autumn, past the excitement of telling friends back at school. But for six year old Isle of Wight boy Xander Craggs, this summer’s trip will be remembered long into the future. For August 2015 is when he took the long journey from the Isle of Wight to Dundee, to the home of DC Thomson – and to the heart of the iconic Beano Office.

Back in June, Xander scribbled a letter to the Beano, telling them he was their ‘biggest fan’ and asking if he could come and see them.

“I like the Beano because it is so funny and they do pranks and funny things.

“I wanted to meet the people who make The Beano and I have a lot of questions to ask about Numskulls and Tom, Dick and Sally.”

Off to Dundee
After close to six weeks, eventually the Beano Office responded – and it was a Yes!

So the long journey to Scotland from the Isle of Wight was planned, via Hadrian’s Wall and Edinburgh, and on a cloudy Thursday afternoon Xander turned up at the temporary office on the outskirts of Dundee (dressed as Dennis the Menace, of course). The grand tour
The Beano desks are currently sharing office space with other DC Thomson titles such as ‘People’s Friend’ and ‘Commando’ – but right in the middle of the floor are two rows of a dozen computer terminals and it is here where The Beano is formed.

Xander had a tour and met all the editors, and even got to see some possible new characters such as Jungle Judy and Emergency Eva.

“We are always looking for new characters. In particular we are well aware we need more girls in the comic.”

The new characters met with Xander’s approval. He was even gifted a print out of a brand new Billy Whizz story which didn’t even have speech bubbles yet. Xander was asked to help out with some Photoshop work with the graphic designers.

“My favourite bit was when I printed a Dennis the Menace picture with magic lines on the computer to help me colour it in.”

Innovations
The team explained to Xander how much of The Beano is created electronically, and showed him how you can draw on a tablet on the desk and it can appear on the computer screen.

However, veteran artists such as David Sutherland (who has created the weekly Bash Street Kids strip since 1962) still hand draw their work on paper and deliver it to the office each week by hand.

Questions, questions
Xander asked many questions of a friendly looking chap sat at a desk. “What was Billy Whizz’s dog called? Can you bring back Tom, Dick and Sally? How did Roger meet up with Dave?”

The man gave a grin, said he would need to check things out, and disappeared for a while. He was Morris Heggie, who has worked for DC Thomson since 1969 and was editor of The Dandy for 20 years. He returned with a copy of the History of the Dandy as a gift, and then took Xander down to The Beano archives – a huge, dusty warehouse with no obvious filing system, but plenty of ancient sheets of comics laid out using scissors and glue. The two of them spent much time poring over old comics and annuals, and they found the very copy of The Beano which was out on the day that Xander was born (in the distant past of 2008). Electronic archives only go back to 2002 – before that date the archives are completely analogue and take up a vast amount of space as the first Beano came out in 1939.

Before he left, Xander was very generously gifted a huge bag full of comics and toys and Beano memorabilia.

He’d had an incredible time, and capped off his visit to Dundee by visiting the old DC Thomson office building, the statues of Desperate Dan and Minnie the Minx in the City Square, and walking through the original Bash Street.

“The people in the office were friendly and just like I imagined they would be. When I’m older I want to be a Beano artist.”

A huge thank you to everyone at DC Thomson for being so patient and thoughtful with a little boy who has a huge passion for his Beano comics. What a wonderful and heartwarming story!

(Yes, I am called Dennis)

Great story, wonderful pictures. I bet Xander will remember that day for many years to come.

Just Lovely I have really enjoyed reading this story and Im sure it will be remembered by all who read it and especially of course the boys who were lucky enough to have this great adventure … Well Done to all involved.

Can you do a degree in Beano Studies ?

Probably only a Ph.D.

Vote Up10Vote Down
A Kennel

It’s articles and photographs like this which sets OTW apart from (and sometimes head and shoulders above)other tired and dreary Island news websites.
If Vix is looking for a new career after the closure of the Isle of Wight College sixth form, she should seriously consider journalism.

Thanks all. He certainly thought the experience totally fantastic – but has no concept yet of how lucky he is. As OTW points out – he asked and they welcomed him in. How brilliant – yet almost too easy!

And yes – I may have more time on my hands come next summer..