Angie Booth from Valu4U in East Cowes explained to a BBC reporter today how her business – which had been profitable for 21 years – has been decimated since Floating Bridge 5 was taken out of service in January 2017. 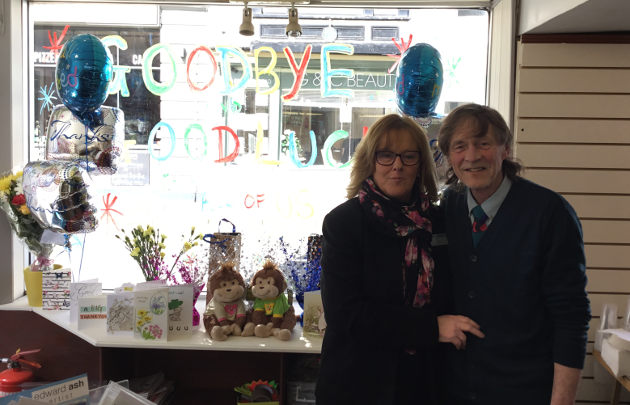 Angie and Roger Booth from Valu4U said goodbye to their loyal customers today (Thursday), as they opened the doors of their 22 year old business in East Cowes for the last time.

The demise of their business – which included the Tourist Visitor Point – is being directly blamed on the impact of the new Cowes floating bridge (No.6).

Business has been “decimated”
Laura Trant from BBC South Today was in East Cowes this morning to interview Angie and others.

In a special for today’s programme, Angie explained to Laura how her business had been profitable for the first 21 years, but has been decimated since Floating Bridge 5 was taken out of service in January 2017.

Fallen footfall
Angie said the new floating bridge was supposed to improve the economy, but that people don’t have the confidence in the bridge anymore and footfall has fallen considerably.

The Isle of Wight council told the BBC there had been 86,000 foot passengers on the bridge since 11 December, but Angie argued the figures are well below those predicted. Looking “into a black hole”
A not-surprisingly tearful Angie, told Laura that she wished the council would go to East Cowes to speak to businesses there.

Having spent all their savings trying to keep the business going over the last year, Angie finished by saying her future was “looking into a black hole” as she and her husband were would now have to look for full time work.

You can see the full report in tonight’s show (BBC1 from 6.30pm) or watch on iPlayer a short while after the programme airs. (Lunchtime programme here – 3.13 mins in). newest oldest most voted
confidential
The entire island population needs to be worried about the IW Council’s ability to understand numbers and manage its finances. According to this article the IW Council have declared that FB6 is a success because 86,000 foot passengers have used it during the past four months which roughly equates to let’s say 300,000 over a whole year. Curiously the IW Council was still simultaneously publishing on their… Read more »
Vote Up26-2Vote Down
lifewriterbutmainlybeer
With the greatest of sympathy for what must have been a soul-destroying year and the loss of a livelihood. Just a couple of thoughts: Could the council have desired / constructed this outcome? How might they GAIN from the demise of a community? How could they possibly get it this wrong, otherwise? As a retired D&T teacher / engineer, I am certain that the new floating bridge… Read more »
Vote Up24-2Vote Down
kennie
There are so many things going wrong on the Island just lately and they are mainly things that the council have a hand in. The roads are in a mess (and the ones that have been resurfaced are already proving that they wern’t done properly in the first place thus costing us taxpayers additional unnecessary expense), Sandown looks like it’s been twinned with Beirut, parking enforcement in… Read more »
Vote Up29-8Vote Down
starheliomos

Yes I agree all failing businesses must be compensated. And let’s have an immediate Council Tax rise to fund it.

Vote Up2-20Vote Down
eastcowes
Let’s do some maths on that number – 86,000 pedestrians have used the bridge in the last four months – that the Council is saying: The first year of charging two years ago they had 1.38 MILLION pedestrian crossings. How is 86,000 in four months even a drop in the bucket?? That’s somewhere between 58% and 75% FEWER pedestrians using the floating bridge!!! That’s a HUGE loss… Read more »
Vote Up18-3Vote Down
eastcowes

Let’s not forget who holds the Transport portfolio at IWC and presumably therefore signs-off on all figures for publication. I wouldn’t trust him to count his own toes and get it right.

Vote Up17-2Vote Down
bbrown
So just what are the effects of the introduction of fares for foot passengers? It could be reasoned that the introduction of fares for foot passengers has a bigger effect on footfall in East Cowes as you are hardly likely to just “pop” over if you have to pay. The foot passenger service has been maintained during shop opening times for the periods the floating bridge was… Read more »
Vote Up10-5Vote Down
eastcowes
The pedestrian fares have had a huge impact. Typically for transport, introduction of fares to what was a free service loses 1/3 of users. Then add to that an infrequent and unreliable service of this floating bridge, and the Council has tanked several businesses in the course of a couple of years. The Solent LEP gave the Council money for the floating bridge to help the economy… Read more »
Vote Up21-4Vote Down
Matt Edmunds
Very sad for those involved, it really is, but I’m really struggling to blame the floating bridge problems here. Surely a small retail business like this will struggle in today’s environment in any case, and in the last year alone we’ve had Home Bargains, The Range, ASDA and B&M open. Has footfall really reduced that significantly because of the floating bridge? Who were the customers who are… Read more »
Vote Up35-36Vote Down
eastcowes
Nonsense. This shop has turned a profit for 21 years. It is not competing with any of the other shops and has an excellent business model. It isn’t TousRUs or Maplins that have been struggling for years. THEY WEREN’T STRUGGLING UNTIL THE FLOATING BRIDGE SCREWED UP. They have accounts to prove it. Sure, there might be other shops that have other problems. But Waitrose, Valu-4-U and several… Read more »
Vote Up33-9Vote Down
Matt Edmunds

Correlation doesn’t equal causation. And there’s no such thing as a business with no competition.

Clearly correlation equals causation when the only variable that has changed is one. That, and when you see your former customers in Newport and they say “we don’t come across the floating bridge anymore because it’s too expensive and takes too long and we can’t count on it.” Yup. Plenty of proof.

Cybermatt, one assumes you have a comfortable superannuated post at County Hall and have no idea whatsoever about risking your own capital to run a business. It is such a shame that you or your colleague Officers are incapable of managing a contract for a simple replacement Floating Bridge.