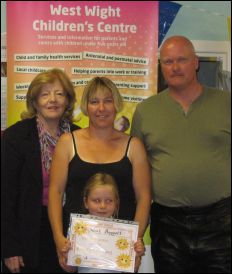 Almost 100 families from across the Island have been recognised for their efforts at Isle of Wight Council’s Annual Family Learning Awards.

The Family Learning Awards give an opportunity to celebrate learning activities that took place in Island schools, children’s centres and community venues throughout the past year.

The special Laura Groves Award for Community and Family Involvement was awarded to Tracey Castle* from WAYS Forward. The award is presented in memory of Downside Middle School Teacher, Laura Groves, who died in 2009. This award is supported by the Adult & Community Learning Service and Pan Neighbourhood Partnership and recognises staff who enable, encourage and support families and members of the community in school life.

“It is also nice to see staff recognised in front of families for their efforts. I send my congratulations to everyone involved.”

Image: Mrs Jo Baggott and Mr Pete Baggott with their daughter Sarah Baggott and Cllr Dawn Cousins on the left.