Shane Thornton was on-hand at Fishbourne to shoot these photos and video as the emergency services were at work last night. 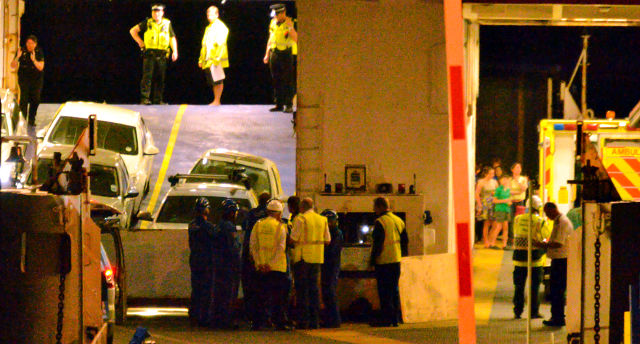 The news of the deck collapse on Wightlink’s St Helen Isle of Wight car ferry has gone around the world, with publications as widespread as the Olso Times in Norway reporting on it.

Below are a collection of photos and video shot last night by Island photographer Shane Thornton. They show different parts of the operation, which took two and a half hours in total to complete.

Wightlink have today sought to assure customers that their other three car ferries were checked over again last night, “Engineers inspected and tested the mezzanine decks before returning the ships to service.” Video
Shane was also on scene to shoot a video of the emergency services at work.

Good photos and atmospheric video. Wouldn’t fancy doing that reversing. OTW is fantastic at getting us the lowdown on crisis events, (as well as other stuff!)

If we are supposed to be reassured by the other ferries’ mezzanine decks having been checked now, (I’m not!), presumably this one wasn’t, prior to sailing, and there now need to be daily or pre-sailing checks. But as has been said, we need to await the investigation as to cause.

It was Radio 4 News that alerted me this morning, so I turned to OTW in the sure and certain knowledge of a detailed report …

Just when I thought I couldn’t have any more disdain for the shoddy services provided by both of our ferry services they go and prove themselves dangerously irresponsible.

Vote Up00Vote Down
milly
This is extremely serious for Macquarie/Wightlink and will inevitably lead to some form of litigation. As has been pointed out previously, there has to be depreciation of the assets and there is skimping on safety. The Health and safety Commission must be allowed to do their job and report. Now it is essential that the local authority takes up the issue of provision where it has previously… Read more »
Vote Up00Vote Down
Highway to Hell

Probably needs confirming, but it sounds like the Whole-time Firefighters from Newport left the scene at 11pm, just as they went on strike – Sandown Crew provided the cover.