How do you define ‘a small fire’? Read Wightlink’s version after ferry fire

Yesterday Wightlink chose to describe the fire on board the St Faith car ferry as ‘small’. Anyone who’s seen the photos of the fire might well question that description. We did, so we asked Wightlink to define ‘a small fire’ – here’s what they told OnTheWight. 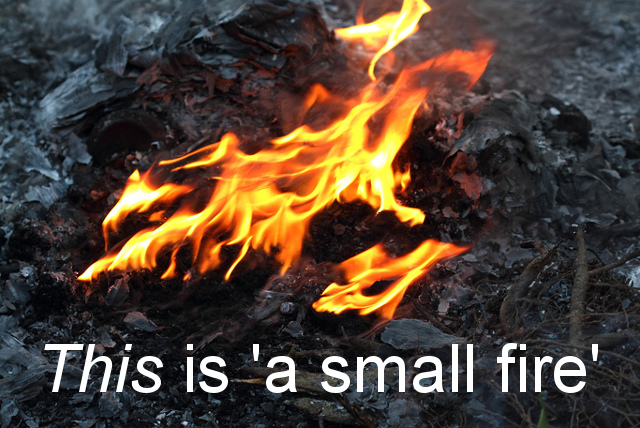 A blaze aboard a Wightlink ferry yesterday (Thursday) left many confused after the ferry company described it as “a small fire” and insisted that “services to and from the Isle of Wight are running normally”. However, when photos taken on board the ferry by passengers were released across the media, it was clear the fire was anything but “small”.

That said, it was, according to Wightlink, extinguished within minutes thanks to the brave and swift actions of the captain and crew. Well done to them!

“It could have been a serious incident thankfully because of hte swift action of the crew we managed to avoid that.”

“Within a couple of seconds it got much much bigger and heavy black smoke started billowing straight up.”

Click on the links in the Tweets to see photos

What’s “a small fire”?
Curious as to Wightlink’s definition of a “small fire”, OnTheWight got in touch with them to find out.

“We would call this a small fire because nobody was injured and it was confined to one piece of equipment in a small area of the ship on an outside deck.

“It did not cause significant damage to the vessel or systems and the Master was able to operate the ship normally in all respects.”

Damage to timetable
Although the damage might not have been considered “significant” by Wightlink, it certainly has affected the timetable. Yesterday and today, passengers were unable to turn up and sail nor able to book for today.

In fact, Wightlink have had to take St Faith out of service for repair (as can be seen from the photos across the newspapers, the fire caused damage to the door to the bridge as well as at least two windows). This has resulted in a reduced timetable for at least today.

They went on to say

“Unfortunately, our sailings are currently closed to new bookings for Friday (20 January 2017), as we cannot bring St Faith back into service until she undergoes repairs, following yesterday morning’s fire.

“The incident has significantly reduced our capacity to carry vehicles to and from the Isle of Wight. Colleagues were yesterday busy contacting affected customers on today’s cancelled sailings to make alternative arrangements for them.

“We are sorry for the inconvenience this causes to our customers.

“However, we do not anticipate there will be any issues this Saturday or Sunday. Customers can still book and amend reservations for this weekend on our website and through our contact centre (space permitting).”

Update 13.50
Wightlink advise St Faith will return to service at 14:00 this afternoon, sailing from Portsmouth.

The Portsmouth-Fishbourne car ferry will be running a revised timetable Friday, 20 Jan. More details at https://t.co/ubJ6rBceIu

Image: Small Fire by Ferran Moya under CC BY 2.0

33 Comments on "How do you define ‘a small fire’? Read Wightlink’s version after ferry fire"

Mountain. Molehill. Must be a slow news day in ventnor.

But it was clearly not a small fire and it could so easily have been disastrous.

I know the truth is old-fashioned these days, but I for one am sick of continual spin and doublespeak and applaud those that challenge it.

Its a small fire in respect of what a large fire would have been. Size is relatve – in my kitchen it would have been fairly big, on a ferry, not so much….

What a strange thing to say. Does your kitchen carry cars and passengers across the Solent?

A fire of that size on a ferry is clearly very dangerous and it’s more than a little strange that we have people on here downplaying it.

Mr Citizen.
I’m not tryingt to downplay the fact that there was a fire on a ferry, just saying that it was yesterdays news covered in great detail with pictures and/or video by a large number of media outlets.
Absolutely unnecessary to trawl it all up again today with a hyped up headline trying to make news where none exists.

Just a quick follow up. Had a quick scan of another couple of online media outlets and counted seven new news stories without having to resort to sensationalising old news.
Slow news day in ventnor.

Nonsense. Wightlink’s original statement was disgracefully opaque and deserved to be exposed as such. Had a passenger not videoed the fire, and OTW reported it properly, there is every likelihood that the truth would not be available to the travelling public.
And you get all this free…

RH. What utter hogwash. Still, it’s to be expected that you’d support otw in this way. You journo’s just don’t like any opinion that differs from yours.
Of course we should all accept that whatever is written in the media must be the absolute without question.

Ah, a media conspiracy. Of course…

It could have been much worse given its location on a ferry mid-Solent, fortunately Wightlink can congratulate its staff for their prompt and efficient actions.

Personally I’d feel much safer if I could drive directly to the mainland instead.

When someone tells you to move on from a story, you should always do the opposite. This was the usual

Actually I agree with wightlink.. it was localised, never out of control and sorted.. yes I’d call that a small fire.. just because the flames look ferocious and there was black smoke

If Wightlink owned the Titanic it would be a case of “we’ve only stopped to take on ice.”

Vote Up00Vote Down
Islander
Question is, was flammable material lying around by the ships control centre (its bridge)or were inflammable materials, say petrol stored there? What caused the material to burn? A discarded cigarette, a match, what? From the fast ignition and fire spread, the top deck could easily have been ablaze, and maybe the bridge abandoned, then a real problem. Did you see any of the ships crew fighting the… Read more »
Vote Up00Vote Down
Snapper

Looked like burning plastic to me, hence flames and thick black smoke. Promptly put out by the crew with fire extinguishers, thus indicating it was a small fire. Damage was slight and the ship quickly brought back into service so no big deal.
Well done those who tackled the fire so efficiently. I applaud you.

I wonder if a fire in a tunnel really would be safer than a fire on a boat, where crew are on hand (as demonstrated) to put it out promptly.

And where would the alternative route be if a tunnel were out of action….

Vote Up00Vote Down
Tim
Giving a personal perspective on this if there was a fire in a tunnel I’d feel safer for a number of reasons. Quite apart from the activation of sprinklers systems built into the structure there are the options of turning around and driving away, walking or running away. By way of contrast leaping into the Solent in the middle of winter gives the near certainty of death… Read more »
Vote Up00Vote Down
Alan

It’s worrying that non of the ferries carry lifeboats… Oh wait.
I’d rather take to one of those than be drowned by tonnes of freezing water cascading in through a cracked tunnel roof.

Alan, that is purely a matter of choice.

Noooo…..no more fixed link comments. ..it’s about a fire on a ferry. ..we’re not talking about death in tunnels or by drowning. . No one died or even came close to it…

Pigwig, I’m talking about personal choice, freedom if you like.

What I’m saying is given the option of using a tunnel rather than a ferry I would feel safer using the tunnel.

The only person to mention a “fixed link” is your good self.

Look at the pictures. That was not a small fire.

Apart from the odd incidence of fire, decks collapsing and travellers being sprayed with sewage, Wightlink have a pretty good safety record. Reliability on the other hand …….

Tim
I would wager that W/L ( has there been any deaths? ) safety record is far better than the saftey record on the highway network !!
Unsafe vehicles not being serviced, and not having MOTs, cars not being insured, and the highways being used as racetracks. drivers under the influence of drugs or drink!!

Richard, I think that you will find that the topic of this article is a Wightlink ferry catching fire.

Tim
I agree why are you bringing up the subject of a fixed link with your comment of feeling safer with a direct drive to the mainland.

Vote Up00Vote Down
In Denial
So … … when hospital patients complain about the difficulty in travelling to the mainland for treatment, that’s NOT a FL subject! … when we’re discussing the Island’s economy, it’s not acceptable to talk about the cost of the ferries and the impact is has! … when a major festival moves to the mainland because of the challenges and cost of the ferries, we’re not allowed to… Read more »
Vote Up00Vote Down
Tim

Richard, the only people to introduce “fixed link” to the conversation are yourself and Pigwig.

Regarding the big/small fire matter I remain of the opinion that irrespective of its relative size I would feel safer driving directly to the mainland instead if that was an option.

Yourself and others may put whatever interpretation on that you so wish.

Tim
Ok , explain what you mean by ” safer to drive directly to the mainland ” if my interpretation is incorrect.

Richard, I’m sorry but I’m not going to be drawn into any argument.

But to reiterate yet again for those that still don’t get it , my personal opinion is that I feel safer driving than I do traveling on a Wightlink ferry.

Surely there can be no misunderstanding of that…can there?

Choice is indeed the word, as Tim says. Give me a FIXED LINK (Oh no, I’ve written those nasty words) to travel more safely across the Solent in double quick time!! You lot can carry on using that antiquated form of Transport if you so wish.

Tim
Looks like I’m not the only one that has interpreted your comments the way I have. Thanks Steve.