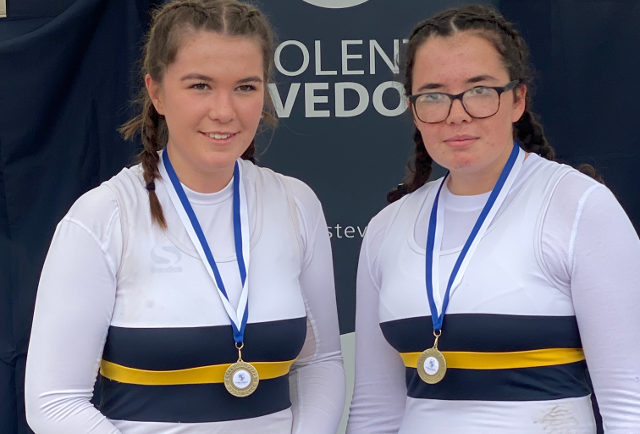 Success came for the Wightlink sponsored club in the Girls’ J16 Double Sculls event where Freya Drage and Niamh Edwards won in some style.

They the competed again with Poppy Starkey and Emily Davies with Cameron Adams coxing in the Girls’ J16 fours event where the they finished in second place – the same result that Poppy and Emily had in their Girls J15 Double Sculls.

This four then split into two double sculls to compete in the Boys’ J16 event with Harry and Charlie finishing in second place and Paddy and Seb finishing third.

Harry Jones also competed in the Boys’ J15 single sculls where he finished second in his heat failing to make the final.

Dan Sanderson also competed in a single scull  – the Boys’ J12/J13 events where he finished in third place and he then teamed up with Frankie Leftley in the Boys’ J12/J13 double sculls event where they finished second in their heat.