Floating Bridge: Out for August at least, but Council don’t know if that’s long enough

The Cowes Floating Bridge has already been out of action for 25 days – with the Isle of Wight council revealing earlier in the week a major fault. Full details on the latest development 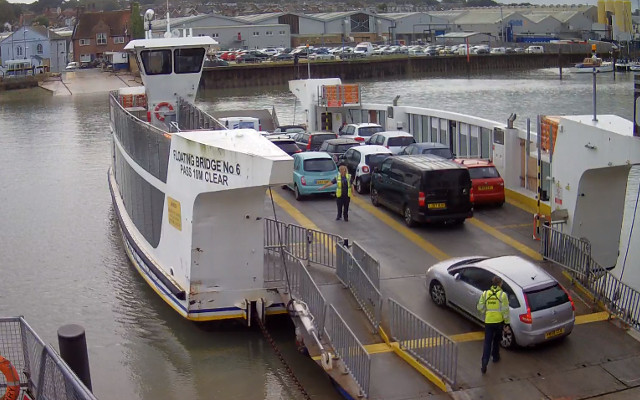 The Isle of Wight council press office have just released this update on the Floating Bridge. Ed

The Cowes Floating Bridge was taken out of service in July for scheduled maintenance.  Whilst undergoing tests prior to returning to service, a major fault with the hydraulic system has been identified.

The shipbuilders and their approved contractors investigated this and advised the council that the vessel could not return to service as originally planned.

Preliminary works
Arrangements have been made to remove some of the main components of the hydraulic system including the main drive and auxiliary pumps and motors, so they can be fully examined and inspected, cleaned and repaired in the workshops. This work will commence on Monday 10th August.

This work may identify yet unforeseen faults within the parts and appropriate replacements may be required.

Won’t know more until end August
A programme has been developed with our shipbuilders to carry out this work and by the end of August we will know the cause, extent of the issue, date for completion of the works and return to service.

Progress on the repairs, and the expected return to service will be closely monitored, and any changes will be communicated to the media and key stakeholders and posted on social media.

The Isle of Wight Council apologises for any inconvenience caused by this ongoing disruption to the service.

22 Comments on "Floating Bridge: Out for August at least, but Council don’t know if that’s long enough"

1. How much is all this going to cost

2. Will this cost be paid from IW Council tax revenue?

Apart from the fact it either has to be fixed or scrapped isn’t it time for legal action against those that sanctioned the order for the purchase of this and also the ship builders that built this heap of crap?

Burness Corlett Three Quays (Southampton) Ltd produced the technical specification agreed to by the IOWC That document formed part of the contract let by the IOWC to the shipbuilder.

But was it not acknowledged quite recently that the vessel as delivered does not meet the specification?

They still haven’t said what the fault is – is it metal in the hydraulic fluid? If so, this is very dangerous and would have been the result of wear and tear that shouldn’t happen. Is this a design flaw?

Thought as much. The IWC spin department (aka the press office) must be off duty. This press release lacks flair and imagination so it’s probably a stand in doing it. Maybe he is stuck in traffic somewhere between Cowes and Newport.

I guarantee they’ll throw shed loads of dosh at fixing it, but you’ll never discover the real amount they spent, because the last thing they’ll want is for it to breakdown a few weeks before the local IW Council election.

‘Floating Bridge: Out for August at least, but Council don’t know if that’s long enough’

How long are a string of sausages?

One of the many failures an effective Corporate Scrutiny Committee would be challenging. But no, the Committee chair decided to cancel their meeting this month just because the Cabinet had been cancelled too. Unremarked upon by the local media.

If the hydraulics prove to be in need of replacement then there is of course a much cheaper and more appropriate, or in keeping, way of lifting and lowering the floating bridge prow, subject to English Heritage lending the IW Council its Carisbrooke Castle donkey.

I would suggest that the Council could well lend a few to EH from the Cabinet.

The IW Council must decide whether to be open and honest about this latest failure of their ‘iconic’ Floating Bridge or rename it ‘Nemesis.’

The IW Council being “open and honest”???

Let’s all demand a transparent cost breakdown of the total spent and ensure that opposition councillors , residents etc get the message across. It should come from the councils auditor, not from someone hopeless out of depth like Ian Ward. Silence will then lose seats. And make clear that a weasel answer will be worse.

We could all put in Freedom of Information requests. But what we will probably get after months of nagging are a few A4 sheets of paper with most of it blacked out with redactions. It’s the sort of thing that happens elsewhere as well, not just the IW Council, to be fair.

Vote Up90Vote Down
tosh
There is not much more you can say about this disaster that has not been said many times before, might it not be better to not remove the defective parts from the chain bridge , but remove the bridge completely and tow it back to where it was made and just leave it there at least then we the tax payers wont have to fork out another… Read more »
Vote Up21-1Vote Down
kerry

How convenient this Coronavirus has been to local democracy.and scrutiny ;-)

It just needs someone to make a FOI request, asking for a breakdown of the costs spent on the floating bridge todaye.