Fourth round of Motorcycle Club trials held in Shorwell 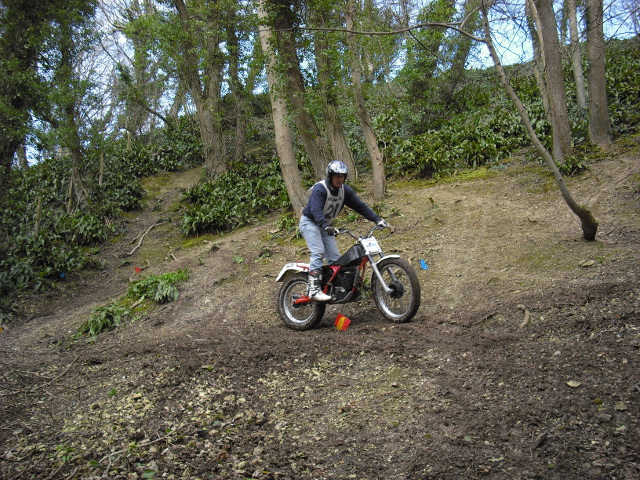 Thanks to Wayne Brodie from the Isle of Wight Motorcycle Club, for this latest report. Ed

The Club held the fourth round of the 2015 Winter Championship at Shorwell Chalk Pit on 1st March, courtesy of Ralph Cook – Thanks Ralph, very much appreciated.

The course was set by Andy Ryall with some help from Simon Newnham. Andy, once again, set out eight really good sections. Calvin Wright was responsible for setting the Beginner routes – A big thank you to all of them for providing us with a great afternoon’s trialling.

Expert, Will West, took the win from Rory Stephens with a convincing performance to bag another ten championship points, Will managed to drop just six points on his way to victory.

The Novice Class produced a very close fought contest between Brian Brockwell and Sam Jones. Sam was ahead of Brian with one lap to go before he managed to un-seat his rear tyre at section one on his last lap! He did well to get it re-inflated and finish the trial but the distraction took its toll leaving Sam having to settle for second place.

Is it just me or does there seem to be one or two more riders having a go in the Twin Shock Class (I wonder, is there something going on with Twin Shock’s soon?)

It was third time lucky for former Expert rider Simon Newnham, Simon is obviously getting to grips with his Twin Shock Fantic and took the win today from Nick Symes who found himself pushed into a rare 2nd spot (apparently Nick stayed out late last night and was probably feeling a bit wobbly!)

It was really good to see Steve Wood, who returned to trials riding today after almost a year, he put in a solid performance to just about claim third place from Calvin Wright in fourth. Good effort by all four riders.

Sportsman’s class
Another popular Class was the Sportsman’s. It was Wayne Brodie, after another
wobbly start – losing most of his points on his first lap, who headed the bunch finishing in front of the course setter Andy Ryall.

Both Mike and Geoff Taylor also returned to trials after long absences to finish third and fourth respectively – although it should be pointed out that they were both riding the slightly harder route.

The closest battle of the day, however, came from the youngest riders of the Club – the Youth Small Wheel Class. Alfie Haydon did ‘just’ enough to take the win from Harrison Crickmore. Alfie managed to complete the trial without losing a single point with Harrison loosing just one point to finish in second. Fantastic effort by both riders.

I would like to take this opportunity to say a special thank you (on behalf of everyone that went) to Ann Gustar, Louise Furnell and Linna Gustar, who between them put on a brilliant evening with good food and an excellent band.

Thanks also to Sandra Power who stepped in to photograph the presentations, at very short notice. Well done to all of you.

Fixtures
Our next trial, The Jeffries Cup, will be held at Apes Down, Courtesy of Mrs Jane Ball, on Sunday 22/03/15. Start time for all routes will be 12 noon. Andy Ryall will once again be setting the trial.

Stay up to date with fixtures through the Website.