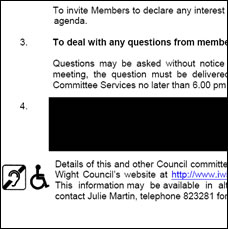 Just hours after VentnorBlog ran the story on Cllr Geoff Lumley having proposed a motion that the Isle of Wight Council Communications department £1,000,000 budget should be cut by £400,000 to give Island primary school children free meals at school, he’s heard that it has been removed by council official from the agenda of the upcoming Full Council meeting.

We went online to look at the Agenda and found that it’s been swapped for another version, removing all the previous traces of the item – as if it never existed.

This follows the day after The Leader, Cllr David Pugh, blocked Cllr Lumley from asking a question at the Cabinet meeting about the changes to refuse collection on the Island stating, “It’s the chairman’s prerogative to not take questions,” after Cllr Lumey has asked a question about Westminster House that had clearly annoyed some members of the Cabinet.

This afternoon, council officers contacted Cllr Lumley to tell him they wouldn’t allow it on the agenda in the pre-election period because there’s a mention of the free school meals pilots taking place around the country in the Labour party manifesto, labelling it “an election issue.”

“I dispute that absolutely, because it (the Labour manifesto) doesn’t say that they’re going to do anything as a result of those pilots – it just mentions the pilot. It’s not a manifesto commitment – it just mentions it as a bit of narrative in the main document,” Cllr Lumley told VentnorBlog.

“I asked them to reconsider, but they haven’t even bothered to come back to me.”

He told VB, “It was censorship last night from the political leadership and today there’s censorship by the senior managers of the Isle of Wight council.”

Cllr Lumley said he put the question in on Monday and that it had been accepted onto the events agenda, “Why has it been removed now?”

“They don’t have my agreement to this withdrawal and I will continue to attempt to raise it next week.”

Information leaked
Cllr Lumley called VB after he had received a call from a reporter at the County Press who had apparently been tipped off about the story from within the Isle of Wight council.

Update: Monday 19th April
We approached the communications team at the Isle of Wight Council for a statement following publication of this article. They got back to us with the following response.

IW Council chief executive, Steve Beynon said: “Members have been informed that a motion previously contained within the original agenda has been removed due to the subject matter appearing within a political party manifesto. This would potentially have constituted a breach of the law relating to council publicity during pre-election periods.

“Another motion submitted by a member of another political party had previously been discounted from the agenda for similar reasons.

“The council has a legal duty to ensure that, particularly during election periods, it does not engage in activity which supports, or could be deemed to support, a political party.”

Perhaps Geoff should put his question in the form of a public letter to be published in the county press, on VB and all other local media. A letter addressed to the council leader published in all local media outlets cannot go unanswered, and if it does Im sure all the local media will be asking why on their front pages.

Vote Up00Vote Down
Victor Meldrew
Oh goodee! Geoff’s on the warpath and rightly so. Not only has El (self-appointed) Presidente tried to gag “Rotweiler” but now his henchman the useless Beygnome is toadying to H.M.V. by removing legitimate items from the agenda. Of course our late Chief Executive (no he’s not dead just always late) as our returning officer should know all about electoral law and procedure. Oh, sorry, he doesn’t, does… Read more »
Vote Up00Vote Down
Gruntled of Bembridge

This probably accounts for the sign I saw on an office wall in the High Street Reichstag.

History does not record what happened to the author!

Astonishing attempt to gag Lumley – and as always, it will backfire on this inept council leadership.
Go get em Geoff.
Until the Tory group members stand up and be counted, this hapless hopeless administration will continue with its siege mentality.

My goodness i hope the whole of the UK is watching the Isle of Wight Conserative Council – and imagines what would happen if the Torys get to run the county! Please don’t vote for Tory Boy & his friends however big their placards maybe.
P.s. Apart from covering up mr pugh’s late night anti social behaviour what else do we get from Â£1 MILLION worth of communication?

The Tories would snatch the food from the mouths of children solely because labour say they should have it?
Thats certainly got Pughs name written all over it.

Vote Up00Vote Down
Deborah Gardiner
I noticed that there was a free school meals pilot on offer. I noticed in Hansard that the Isle of Wight Council had expressed an interest in running a free school meals pilot (I don’t think that Councillors were told about this, or god forbid, consulted?). Suddenly the Council is not interested but not only are they not but they don’t want the issue discussed publicly! Having… Read more »
Vote Up00Vote Down
Meursault

Geoff Lumley I am a big fan, shame you didn’t run for election (and even better as an independent). Could be great for our Island. Keep up the good work!

Already an All Wight satire of this latest farce up!

Nice to see Geoff getting his teeth into this council again – keep up the good work Geoff!

Tory Councillors get rid of Pugh. Time For Change!

I foresee another few column inches coming up in Private Eye’s ‘Rotten Boroughs’, where the IW council has practically taken up residence!

Vote Up00Vote Down
winston smith
I would love all school children to have school lunch. I have a school lunch everyday they are nutritious free of salt and sugar (well as free as they can be) balanced and wonderfully tasty. As well as their balanced meals the children have bowls of finger sized cucumber, peppers and carrots which they all crunch away on happily. Yum yum. I free the parents who choose… Read more »
Vote Up00Vote Down
Adam

If people are unhappy with the way the ruling Tories are running IWC and their decisions, is it not possible to call a meeting in the same way as Ventnor did to discuss the conduct and confidence in them?

It would be as pointless as the Ventnor meeting

tory manifesto says recall inept MP`S why not a recall for inept councils and councillors, the cabinet have handed over control of agenda to Conservative HQ, Carisbrook Mall

A statement from Steve Beynon has now been added to this article.

They won’t have much to talk about then, if anything to do with saving money, improving efficiency or reducing executive ineptitude is off limits!

Must b e why DP has disapeared..in case he puts his foot in it