Energised by feedback from other party conference-goers, Vix says she’s looking forward to the last two months of the election campaign. 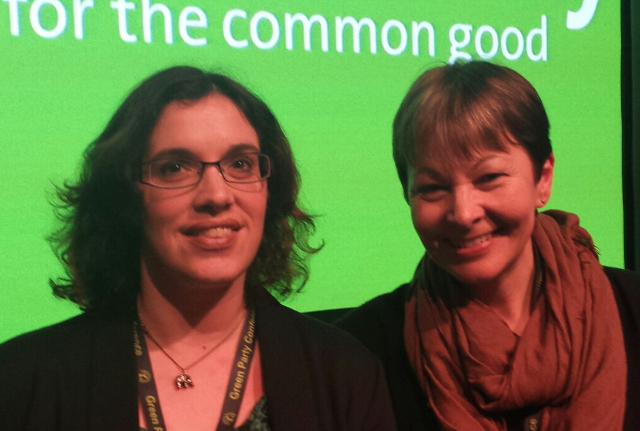 This in on behalf of Vix Lowthion. Ed

Vix Lowthion, Green Party prospective Parliamentary candidate, has returned to the Isle of Wight from a successful party conference in Liverpool.

New party policy tackling lack of government accountability for the NHS, and enhanced provision for mental health services were some of many of the issues debated by party members.

Encouragement from Caroline Lucas
She spent time with Caroline Lucas, Green Party MP, who told Vix, “I’ve always thought we should do really well in elections on the Isle of Wight”.

Caroline was pleased to hear that IW membership has tripled in the last year, reflecting the national trend to 55,000 members of the Green Party.

Ferry solutions
Vix also had a meeting with Dr Rupert Read, transport spokesperson, who was very interested in possible solutions to the ferry situation across the Solent and offered a number of new avenues to explore.

“It has been another great opportunity to highlight the hard work of all our Green Party members across the Isle of Wight.

“Other conference-goers stopped me just to say how much they had heard about our momentum on the Island. Now I am back home, energised for the last two months of our campaign up to the General Election and looking forward to our ‘Undecided?’ Public meetings at an Island town near you.”

The next one will be at Gurnard Village Hall, this Wednesday 11th March at 7.30pm.

newest oldest most voted
The Sciolist

What a thrill. Did you ask her about the Green’s housing policy?

Too busy voting on policy commitments to reinstate the NHS as a publicly run and accountable service, improve mental health provision as a priority, secure funding for FE colleges and listening to Caroline’s experiences of the dreadful power of whips in parliament (Green party don’t have a whip). But thanks.

There’s not much point in having a whip if you’ve only got one MP, unless you’re into self-flagellation.

Good photograph, Vix, keep going, you have definitely made a hit on the island. Keep explaining the policies to voters.Everyone deep down likes you.

One thing, have another ‘Keep the NHS Public’ before the election, don’t leave it hanging since the last one.

You wanna concentrate on finding a more articulate leader, one who can explain to people what your policies actually are.

Better to stumble with humility in truthful articulation, than to consistently lie with eloquence in peddling snake-oil.

Odd that some folk prefer the latter.

Vote Up00Vote Down
Robert Jones
All parties do this: here’s me with Ed Miliband, Eric Pickles, Paddy Ashdown, Screaming Lord Sutch, AND Lloyd George knew my father. It doesn’t necessarily make one, or them, a better person – just for the record, I’ve met lots of politicians, mostly from yesteryear. I hate to be left out. But I’m still ‘orrible. (No, I’m not saying VL or any of the candidates is/are ‘orrible.… Read more »
Vote Up00Vote Down
Vix Lowthion

I met Caroline at a Fringe event. I bumped into the likely next MP for Norwich South and had a chat with her over lunch. I ran across the foyer to grab time with Rupert Read, transport spokesperson. I never saw Ms Bennett! But I do have a photo with her on my fb profile. You need to squint!